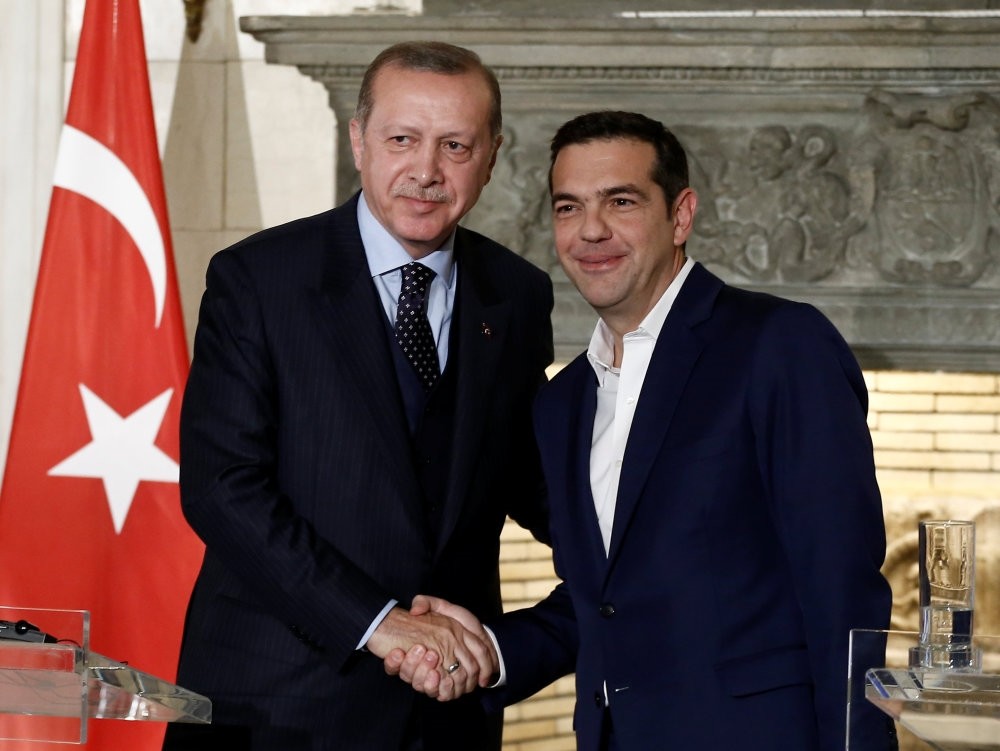 On the first of his two-day visit to Athens, President Erdoğan and PM Tsipras expressed their willingness to turn a new page in ties and maintain dialogue channels while accepting disagreements, particularly on issues related to Greece's Muslim Turkish minority and Cyprus issue

Greece and Turkey expressed willingness to open a new page in bilateral relations, as they agreed to launch "confidence-building measures" during Recep Tayyip Erdoğan's historic two-day visit to Athens, the first in 65 years at the presidential level, where he met with Greek President Prokopis Pavlopoulous and Prime Minister Alexis Tsipras. "We agreed to resume talks, under our supervision, on confidence and security measures, as well as exploratory talks on the continental shelf," Tsipras said, adding that both parties tried to walk in each other's shoes to enhance bilateral understanding.

"We can talk respectfully without provoking each other. Of course our relationship will be modernized. Will this relationship reach a level that will fulfill the needs of our societies?" Tsipras also voiced Greece's disagreements with Turkey, particularly when it comes to revising the 1923 Lausanne Treaty. "This modernization can only occur within the scope of definite respect to the Lausanne Agreement. The reconstructing of this agreement is not even a matter of question. I'm saying this loud and clear. We have had a clear talk with Mr. President. We are not hiding behind the disagreements. We have discussed regional matters as well as matters regarding the Aegean Sea."

The Treaty of Lausanne was a peace treaty signed in Lausanne, Switzerland. As a result, the conflict that existed between the Ottoman Empire and the Allied French Republic, British Empire, the Kingdom of Italy, the Empire of Japan, the Kingdom of Greece and the Kingdom of Romania after World War I began was settled. The borders of modern Turkey were defined in the treaty.

Tsipras also said the issue of Cyprus, the extradition of Gülenist Terror Group (FETÖ) members, the of coup plotters who had escaped to Greece after July 15 coup attempt, the migrant issue, as well as the issues of minority communities in both Turkey and Greecewere also discussed.

"I said Greece will support a democratic Turkey which turned its face to Europe. I've said that I will not support the coup plotters who are in our country. The Greek judiciary's decisions are taken independently and respected by all of us," Tsipras said and added: "I call for a new period in Turkish-Greek relations in the year of 2018. I invite you to open a new page. This new page will not be based on provocations but will be based on alliance bridges. We believe that we can manage that."

President Erdoğan on his part also underlined the importance of developing ties with neighboring Greece, saying "both countries have important steps to take," particularly on trade and transportation. Erdoğan called on Greek authorities to respect the rights of the Turkish Muslim minority community, extradite FETÖ-linked soldiers who had escaped to Greece [after the July 15 coup attempt] and cooperate against terrorism.

Former Turkish EU Minister Beril Dedeoğlu was quoted by Anadolu Agency, saying that the Turkish president's historic visit was a "highly important" indication to further enhancing relations between Ankara and Athens. "It [the visit] reveals a willingness to resolve the problems between the two countries," Dedeoğlu was quoted as saying to Anadolu Agency. She said even if disputed issues come to the agenda, such a visit is "useful."

"For many years Turkey has been fighting against the PKK, Daesh and FETÖ terrorist groups. Greece comes among the leading countries that can empathize with us," Erdoğan said, urging Greek authorities for speedy action against FETÖ members in Greece and demanded their extradition.

The Turkish president added that he also demanded Greece to improve the situation of the Muslim minority in the country, while also touching again on the need to revisit the Laussane Treaty, as he did in the meeting with the Greek president ahead of his meeting with Tsipras.

He reiterated that Turkey has taken important steps for the rights of the Greek minority in Turkey, while the same approach has not been taken by Greece against Turkish Muslim community in Greece.

The mufti [religious authority for Muslims] election issue has been an ongoing issue between Greek authorities and the country's Muslim minority for decades.

The election of muftis by Muslims in Greece, which are mostly concentrated in Western Thrace, was covered by the 1913 Treaty of Athens between Greece and the Ottoman Empire and was later included in the Greek Act 2345/1920, near the dawn of the Republic of Turkey.

The 1923 Treaty of Lausanne also guarantees the religious freedoms of the Muslim minority in Greece. However, Greece annulled the Greek Act in 1991 and started appointing muftis itself.

The appointment of muftis by the Greek state is not recognized by Muslim Turks, who say their community should elect the mufti. Ankara also opposes the Greek approach to the issue, saying it works against international norms on religious freedoms.

Erdoğan also added that Ankara pays the utmost importance to the issue of Cyprus, and that Turkey favors a solution through dialogue and negotiations. The president accused the Greek side of leaving the negotiation table at every opportunity during Cyprus talks and not compromising for a solution that would benefit both sides. "We want a permanent and a just solution," he added.

Erdoğan's visit began with positive comments made ahead of the visit by both the Turkish president and Greek Prime Minister Alexis Tsipras. However, the remarks made by Greek President Prokopis Pavlopoulous on the Treaty of Lausanne during Erdoğan's first stop in Athens overshadowed previously made positive remarks and signs of progress in ties. Experts said Pavlopoulous's comments are a reflection of Athen's unwillingness to repair ties.

"The Turkish Muslim minority in Greece is not able to benefit from the rights gained in the Lausanne Treaty, as it is limited to a religious basis and does not include ethnic minorities," Muzaffer Şenel, an academic at Istanbul Şehir University, said, adding that Greece's insistence on maintaining the treaty as is because including "Turks" as minorities in addition to "Muslims" would trigger new debates in Greece's domestic politics and among other minorities in Greece.

The Greek president also said during his opening remarks that the Lausanne Treaty, signed in 1923 and guaranteeing the religious freedoms of the Muslim minority in Greece, is not open to any changes or revisions and that both Turkey and Greece should move beyond discussing its terms any further.

"Muslims in [Greece's] Western Thrace have not even been allowed to choose their own mufti from their community; efforts to appoint a mufti are ongoing, but this is not the case for the Patriarchate in Turkey," Erdoğan responded.

"You cannot find any discrimination against Turkish citizens of Greek origin in Turkey, while in Western Thrace, even writing the word 'Turkish' is not allowed."

Noting that the average income of Turks in Western Thrace, home to more than 145,000 Muslims Turks, is $2,200, Erdoğan said: "Steps for investment and economic development have not been taken; for this reason, the Lausanne Treaty should be updated."

Pavlopoulos insisted, however, that the treaty was in need "neither of revision nor of updating."

The Greek president's move was a reflection of the fact that Athens is "not able to act freely" in its relations with Turkey, according to rector and academic in International Relations at Yeni Yüzyıl University Yaşar Hacısalihoğlu. "For the West, Greece has a historic and a religious mission. It also acts as a buffer zone for the West. As such, it is not able to act in a manner that would serve only its national interests when it comes to the Lausanne Treaty," he added.

President Erdoğan added that although he was the first Turkish president to visit Greece after more than six decades, there were some groups attempting to provoke the visit and criticized Greek authorities for not taking effective security measures.

Before Erdoğan, President Celal Bayar was the last Turkish head of state to pay an official visit to Greece in November 1952. Earlier that year, King Paul and Queen Frederica visited Turkey.

Erdoğan, who last visited Greece as prime minister in 2010, was invited by Pavlopoulos to pay a two-day visit.

Speaking to Greece's local broadcaster Skai TV ahead of his visit to the country on Thursday, Erdoğan touched on bilateral relations between Turkey and Greece: "You should know that negative relations between Turkey and Greece has become history. Now, there are two countries that make a high level strategic council agreement and establish relations on it. ... Trust and stability are our two most important principles."