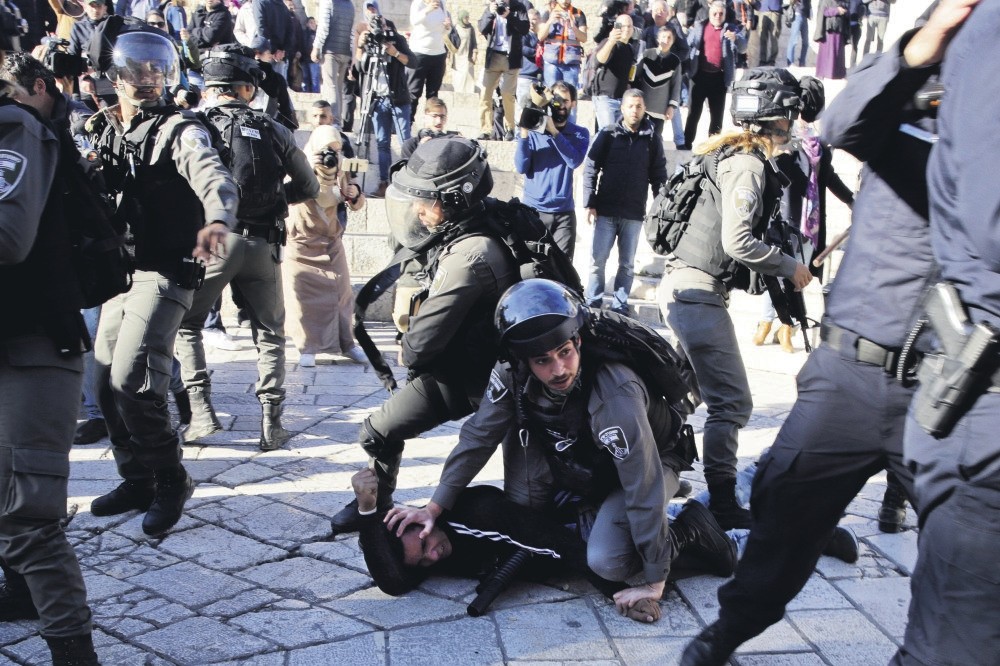 Israeli border police arrest a Palestinian during a protest against the U.S. recognition of Jerusalem as the capital of Israel at Damascus Gate in Jerusalem's Old City, Dec. 8.
by Şeyma Nazlı Gürbüz Dec 12, 2017 12:00 am

According to experts, tensions will rise between Ankara and Washington since both sides seem determined in their stances on the status of Jerusalem

Earlier last week, Trump pledged to relocate the country's embassy in Israel from Tel Aviv to Jerusalem, a pledge he made during the election campaign.

President Recep Tayyip Erdoğan reiterated Turkey's position on Trump's decision, saying: "Trump's declaration of Jerusalem as the capital of Israel is null and void for us."

The relationship between the two countries does not seem to be evolving toward a better situation in 2018, according to Ali Çınar, president of the U.S.-based Turkish Heritage Organization. "I do not expect either Turkey or Trump to take a step back," Çınar said, despite the two countries being long-time NATO allies.

"Trump's decision about Jerusalem will certainly create more tension between Washington and Ankara," Jana Jabbour, a research associate in Sciences Po and a professor of political science at the University of Saint Joseph, told Daily Sabah.

According to Jabbour, under the leadership of the Justice and Development Party and Erdoğan, Turkey has become one of the main champions of the Palestinian cause and of the causes of the Muslims more generally. Yet, "despite these new tensions, a complete break in the American-Turkish relations is highly unlikely," Jabbour emphasized.

"Turkey has always managed its external relations in a pragmatic way while standing with Muslims and defending the interests of Muslims worldwide. Turkey has kept relations with Western countries. In that sense, Turkey practices split diplomacy – it is one of the rare countries capable of building good relations with antagonistic actors of the international system," Jabbour added.

"There is the pressure from not only Turkey but also other NATO allies, and Turkey will do whatever it can against this decision in an international realm," Çınar said regarding Turkey's determination.

"For us, declaring [Jerusalem] as the Israeli capital and relocating the embassy there has no validity," Erdoğan said Sunday, adding that all diplomatic steps will be taken on the international stage to show that the unilateral decision cannot be accepted.

Turkish-U.S. relations are the worst they have been for a decade. The presence of Gülenist Terror Group (FETÖ) leader Fetullah Gülen in Pennsylvania remains a problematic issue, especially after the bloody July 15, 2016 coup attempt blamed on FETÖ.

FETÖ is accused of being behind a long-running campaign to overthrow the Turkish state through infiltration of state institutions, particularly the military, police and the judiciary, ultimately leading to the July 15 coup attempt last year. During the coup attempt, 249 people died and more than 2,500 others were wounded.

U.S. authorities have yet to take steps to extradite Gülen, who has lived in self-imposed exile since 1999 in the foothills of the Pocono Mountains in rural Pennsylvania.

Regarding the possibility of reconciliation, Çınar emphasized the importance of bilateral dialogue despite not seeing a high possibility for any compromises from either side. "If the implement of the decision would be extended over time, then there might be a chance to soften relations," Çınar added.

"Turkey will not compromise on Jerusalem, it will use its relatively manageable relations with Trump and the American administration to make the voices of Muslims and Palestinians heard, thus putting pressure on Washington," Jabbour said, adding that Turkey is among the few Muslim countries that has leverage on the U.S. given Turkey's important role in the fight against terrorism and Turkey's membership in NATO.

The two NATO allies are also at odds over their policies in Syria. U.S. support for the Syrian Democratic Forces (SDF), the majority of which is made up of People's Protection Units (YPG) fighters, has been a major strain on relations between Washington and Ankara. Turkey considers the Democratic Union Party (PYD) and its YPG militia to be the Syrian offshoots of the PKK, a proscribed terrorist organization in the U.S., Turkey and the EU. However, Washington has adamantly resisted similarly designating the PYD or YPG, using it as a principal partner in the ground fight against Daesh in northern Syria.

Even though during a phone call between Trump and Erdoğan, Trump promised that the weapons that were given to the YPG will be retrieved, U.S. officials continue to indicate that arms support to the YPG in Syria will end, but the support will continue for now. Ankara pressures Washington and has warned several times of a possible operation in northern Syria against the YPG. On Dec. 1, U.S. Secretary of Defense Jim Mattis said that the Pentagon's weapons support to the YPG, would cease, but added the focus would move toward holding territory and thus YPG militants could become local police forces. Ankara argues that due to the organizational links between the YPG and PKK, the U.S. arms support to the YPG eventually gets transferred to the PKK and gets used against Turkey.

The detention of a U.S. consular staff of Turkish origin in a probe over links to FETÖ led to the suspension of U.S. visa services in Turkey, which was responded to in kind. Turkish national Metin Topuz, employed by the U.S. Consulate in Istanbul, was remanded to custody on terrorism charges by an Istanbul court. Topuz is accused of having links to FETÖ, which was behind last year's defeated coup attempt, according to a judicial source.In his report for the Foundation for Political, Economic and Social Research (SETA), "US-Israel Relations in the Trump Era," published in May 2017, Geoffrey Aronson points at Trump's difference regarding the recognition of Jerusalem as Israel's capital from previous U.S. presidents.

"For many years, it has been a political ritual in the United States for presidential candidates and members of Congress, Democrats and Republicans alike, to declare an ironclad intention to move the U.S. embassy to Jerusalem," he says, adding that everyone in the White House, regardless of their political stance, is expected to continue to refuse to do so for "well-considered matters of policy and national interest." Yet, he also warns that Trump may be different.

Some of the sensitivity over Jerusalem comes from a religious site – the Temple Mount for Jews and built on top of it, Haram al-Sharif for Muslims. The site includes Al-Aqsa Mosque, the third-holiest site in Islam, and the Dome of the Rock. It was also the site of ancient Jewish temples and is the holiest place in Judaism.