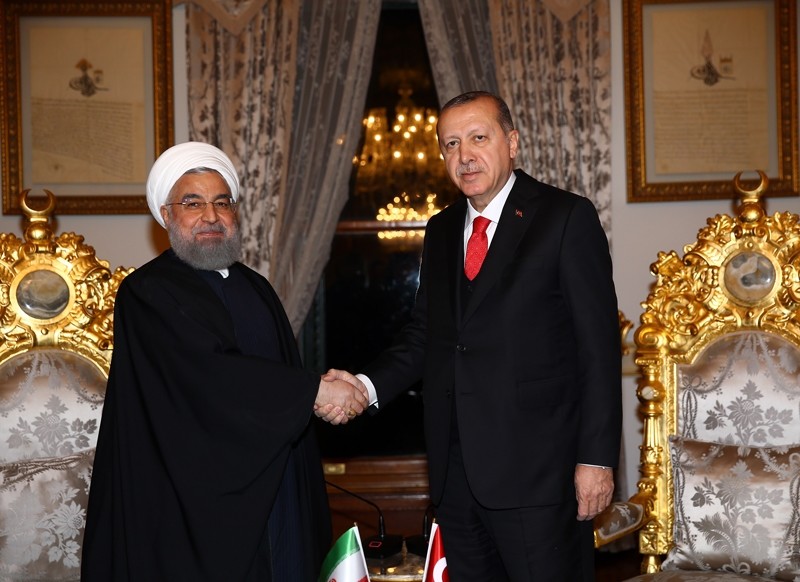 President Recep Tayyip Erdoğan and his Iranian counterpart Hassan Rouhani held a closed-door meeting in Istanbul on Wednesday after Turkey hosted an extraordinary summit of the Organization of Islamic Cooperation (OIC) to discuss Trump's internationally-opposed move to recognize Jerusalem as Israel's capital.

The meeting, which took place at Yıldız Mabeyn Palace, lasted about 45 minutes.

Later on Wednesday, Erdoğan met with Omar al-Bashir, the president of Sudan, for a closed-door meeting of nearly an hour and 15 minutes.

The meetings came after an extraordinary summit of the Organization of the Islamic Cooperation (OIC) in the wake of U.S. recognition of Jerusalem as Israel's capital.

Turkey had called on the OIC to convene after the U.S. President Donald Trump last week announced that he recognizes Jerusalem as Israel's capital instead of Tel Aviv, and that the U.S. Embassy will be relocated to Jerusalem.

After the summit, leaders of the Muslim world announced that they recognized Jerusalem as Palestine's capital "under occupation" and urged the U.S. to withdraw from the peace process.

Erdoğan called Trump's decision an 'award' to Israel for its "terrorist activities," reasserting that the move was not binding for Ankara and was "null and void." He also said that Muslim countries would never give up on the sovereignty and independence of Palestine.

Also speaking at the summit, Rouhani said the United States was seeking to "maximize Zionist interests" with the move and neglecting legitimate Palestinian demands.

The Iranian president asserted that the U.S. had never been an honest mediator in the peace process and called on the Islamic world to unite against the "Zionist regime."

"Some countries in our region are in cooperation with the United States and the Zionist regime and determining the fate of Palestine," seethed Rouhani, whose country does not recognise Israel.

Jerusalem was first put under international sovereignty and control with the 1947 U.N. Partition Plan, which recommended the division of historical Palestine between Jewish and Arab states in order to end the conflict in the region. The U.N. opted for a special status, as Jerusalem is holy to Jews, Christians and Muslims. However, during the 1948 Arab-Israeli War, Israeli forces declared West Jerusalem part of Israel, ignoring the U.N. recommendation.