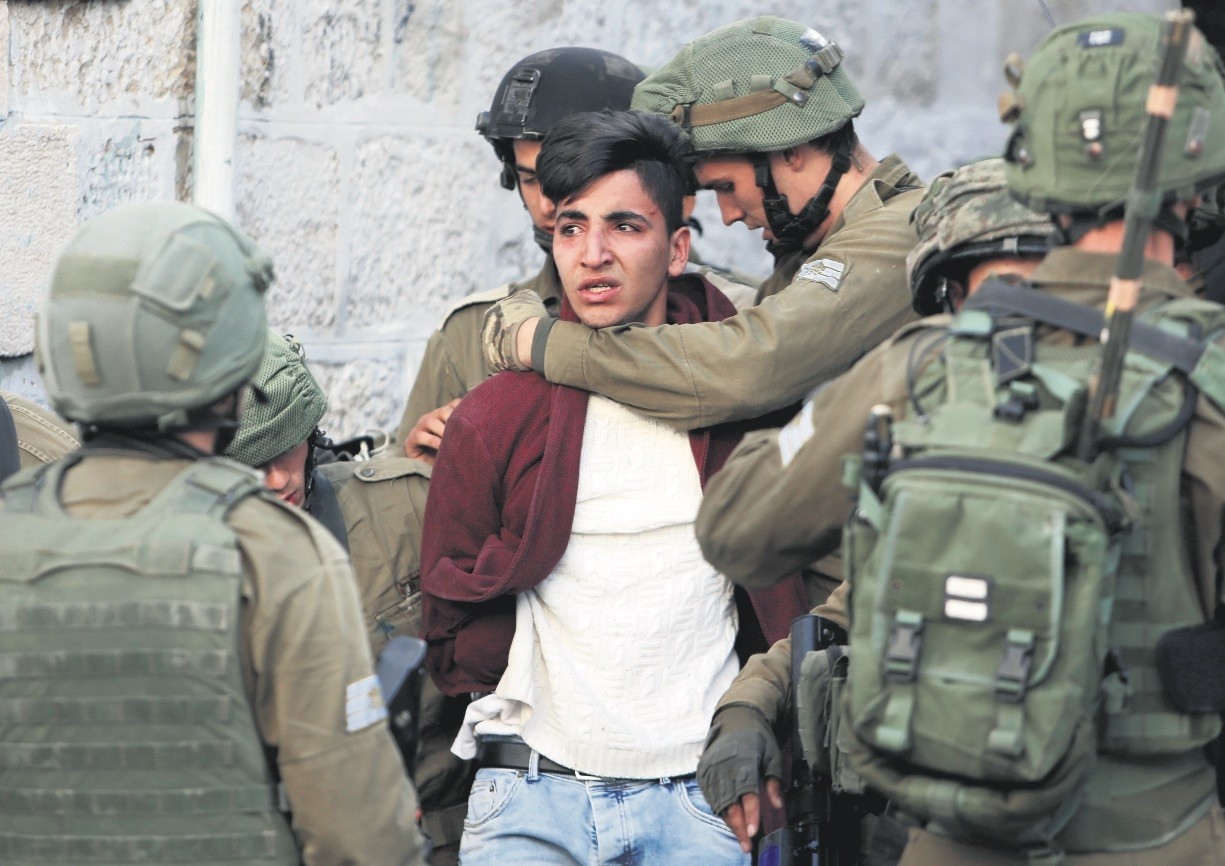 Israeli soldiers detain a Palestinian during a protest against U.S. President Trump's decision to recognize Jerusalem as the capital of Israel, Hebron West Bank, Dec. 10.
by Daily Sabah with Agencies Dec 13, 2017 12:00 am

The organization for Islamic Cooperation, a top Islamic body, convenes today to send a strong unified message in an ‘Istanbul Declaration' against the White House's recognition of Jerusalem as the Israeli capital

The Organization of Islamic Cooperation (OIC) is expected to send a strong message during an emergency summit in Istanbul today against U.S. President Donald Trump's recent decision to recognize Jerusalem as Israel's capital. The summit will send a strong message against the White House's decision, Foreign Minister Mevlüt Çavuşoğlu said yesterday. "We are working on an Istanbul declaration," Çavuşoğlu said, noting that a joint declaration will be announced after the meeting which will "strongly reject" the U.S. move. He underlined that the summit will also call on countries that are yet to recognize Palestinian statehood.

Trump stoked the flames of a new crisis in the region after he signed a decision to move the U.S. Embassy in Tel Aviv to Jerusalem and recognize the city as the capital of Israel. The sensitivity of Jerusalem originates from the fact that for Jews it is known as the Temple Mount and for Muslims as the Haram al-Sharif (Noble Sanctuary). The site includes Al-Aqsa Mosque, the third-holiest site in Islam, and the golden Dome of the Rock. It was also the site of ancient Jewish temples and is the holiest place in Judaism. "The decision made by the United States will be strongly opposed. A country like the U.S. should not fall into this situation. We expect the U.S. to back down from this mistake. This decision is considered null and void," Çavuşoğlu said.

Turkey's Foreign Minister Mevlüt Çavuşoğlu noted that Ankara had recognized Palestine as a state, with East Jerusalem as its capital.

The OIC was founded on Sept. 25, 1969 in Morocco in reaction to an arson attack on Al-Aqsa Mosque in Jerusalem in August of that year. It has 57 member countries and is headquartered in Jeddah, Saudi Arabia.

Turkey, as the term president, called on the leaders of the body last week to convene for an emergency meeting, which Turkish President Recep Tayyip Erdoğan said would draw a road map for the next steps to be taken by the leaders of the Islamic world. Highlighting the importance of the emergency summit, Erdoğan has underlined in speeches since his call for the summit that he expects the meeting to be a turning point for the Jerusalem issue and the steps Muslim world leaders will take.

As the term president, Erdoğan has frequently criticized the leaders of the 57 member states for the lack of unity among the nearly 1.5 million Muslims worldwide on regional and global issues.

Erdoğan said on Monday that the next steps for those concerned about Palestine will reflect how genuine they are on the issue. The Turkish president is expected to criticize member states if the participation turn out is low, as he has previously urged for a more effective agenda setting and activities by the OIC and its sub-groups.

So far, Palestinian President Mahmoud Abbas, the foreign minister of the United Arab Emirates, an Egyptian foreign minister, a Qatari Emir and Sheikh Tamim Bin Hamad Al Thani are among the confirmed participants among other influential parties in the region. The presidents of Iran, Indonesia and Somalia and King Abdullah of Jordan, who is the formal custodian of the Christian and Muslim holy sites in Jerusalem, are also expected to attend the summit.

Saudi Arabia is yet to confirm who will attend the meeting, Çavuşoğlu also added.

"It seems that some states are too intimidated by the state [the U.S.] that has made this decision. Some countries in the Islamic world are fearful. Cowards die many times before their death. Who are you afraid of and why?"

Turkey has harshly criticized Trump's move saying the city of Jerusalem, known as Al-Quds to Muslims, is a "red line" for the Muslim world, President Erdoğan also said.

"The U.S. has become a partner in the bloodshed by recognizing Jerusalem as Israel's capital. We certainly do not recognize this decision. We will not recognize it. President Trump's statement does not bind us, nor the world of Islam," Erdoğan said, criticizing Trump during his speech on Monday.

Jerusalem was first put under international sovereignty and control with the 1947 U.N. Partition Plan, which recommended the division of historical Palestine between Jewish and Arab states in order to end the conflict in the region. The U.N. opted for a special status, as Jerusalem is holy to Jews, Christians and Muslims. However, during the 1948 Arab-Israeli war, Israeli forces declared western Jerusalem part of their state, ignoring the U.N. recommendation.