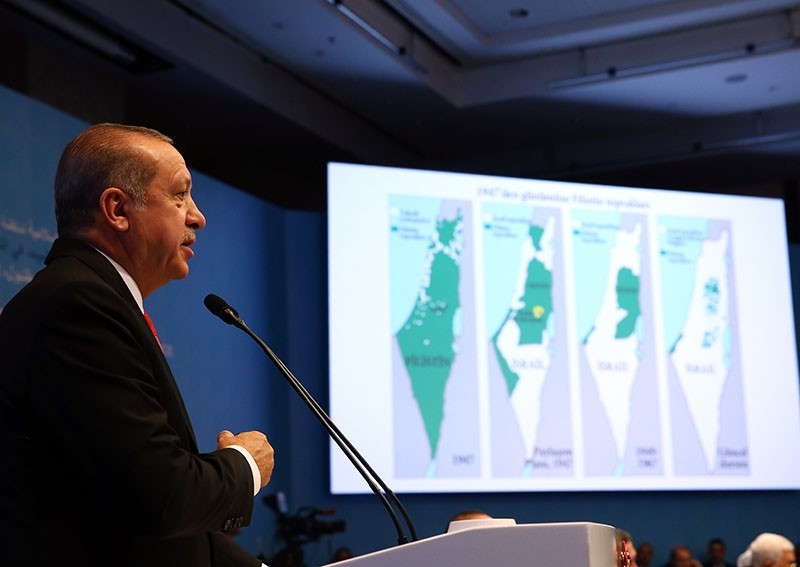 During his speech in the Organization of Islamic Cooperation (OIC) Extraordinary Summit on Jerusalem, Pres. Recep Tayyip Erdou011fan points to maps showing the lands in the hands of Palestinians shrinking since 1948, in Istanbul, Dec 13, 2017. (AA Photo)
by Daily Sabah Dec 13, 2017 12:00 am

The U.S. decision to recognize Jerusalem as Israel's capital, above all, means punishing Palestinians who have proven numerous times that they side with peace instead of violence, President Recep Tayyip Erdoğan said during the Organization of Islamic Cooperation summit that convened in Istanbul Wednesday.

Erdoğan said he believed 196 countries in the world would display a common response to the U.S. decision, underlining that peace in Palestine could only be assured when the international community "stands by the truth and recognizes the free state of Palestine immediately."

He called upon "all just countries" to protect Jerusalem as Palestine's capital, adding that Muslim countries would never give upon the sovereignty and independence of Palestine.

"While the occupying state is being recognized, there is no logical reason for the party that wants peace, that lives in one fifth of historical Palestine to not be recognized," Erdoğan said, reiterating that Jerusalem and the holy al-Aqsa compound were a red line for the Muslim world.

He also urged to accelerate to process of including Palestine in international agreements and organizations, saying that "remaining neutral between the occupier and the occupied means supporting oppression."

The president warned that the U.S. "does not stand with those seeking peace, but with those making peace impossible."

"Trump wants to give Jerusalem as a present to Israel, as if he is donating one of the U.S. states, as if he is the only person with the authority to decide," Abbas said.

"The U.S. has lost its mediator role in the Israel Palestine peace process, and we will never allow in the future that the U.S. takes part in the process. We want OIC to support us in this decision," Abbas added.

The Palestinian president also urged participants of the OIC summit to take "very clear and strong decisions" with the aim of protecting the places of worship of both Muslims and Christians.

Touching upon Israel's invading approach, Abbas said: "To be an internationally-recognized state, 3 things are needed: government, people and borders. Israel has government, has people, but has no borders."

During his election campaign last year, Trump repeatedly promised to relocate the U.S. embassy from Tel Aviv to Jerusalem.