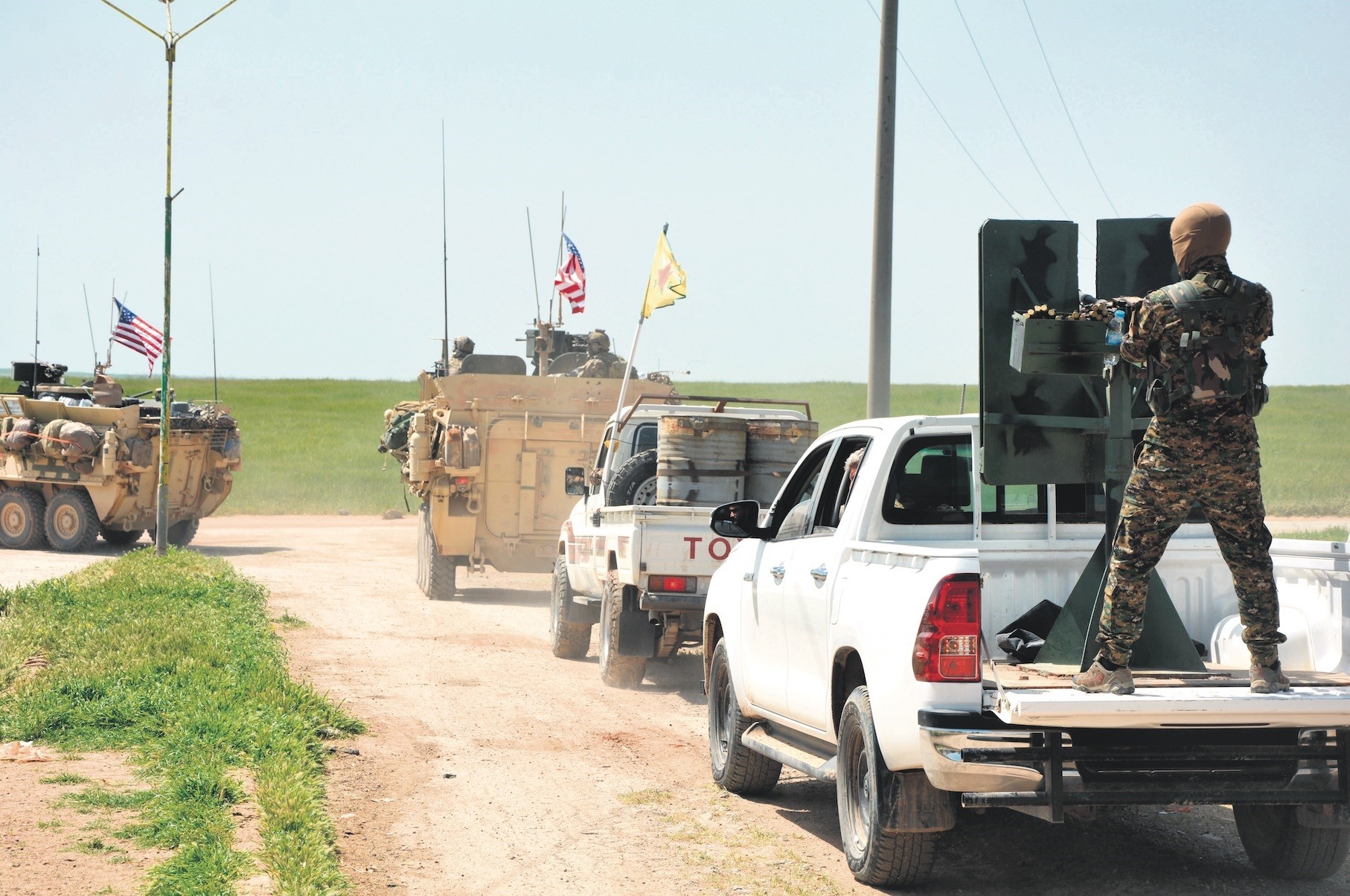 A convoy of U.S. troops and YPG terrorists patrol near the Syrian town of al-Darbasiyah at the Syrian-Turkish border, April 29.
by Daily Sabah Dec 14, 2017 12:00 am

Chief of Staff Gen. Akar is expected to communicate the clear expectations that Ankara expects Washington to halt all military support given to the PKK terrorist group's Syrian affiliate YPG to the top U.S. generals during their visit to Ankara

Chief of General Staff Gen. Hulusi Akar is expected to urge U.S. generals arriving in Ankara today to recover American weapons given to the People's Protection Units (YPG) and put an end to the support given to the terrorist group in Syria, especially in the northern Syrian town of Afrin.

Akar will host a critical meeting today with U.S. Central Command (CENTCOM) Commander Gen. Joseph Votel and Curtis Scaparrotti, the commander of U.S. forces in Europe. Akar is expected to tell Votel and Scaparrotti to retrieve weapons provided to the YPG on the pretext of fighting Daesh in Syria. He will also ask the U.S. generals to set a deadline for setting out a schedule to retrieve the weapons by the second week of January.

The U.S. military has been providing YPG militants with armored vehicles and arms to aid them in the fight against Daesh, defying Ankara's warnings about the dangers of fighting a terrorist group with another.Previously, U.S. Secretary of Defense James Mattis pledged to recover weapons from the YPG once the battle against Daesh is over. Washington's open show of support for a PKK affiliate in Syria surfaced in media outlets in October 2015 after the U.S. air force dropped 50 tons of weapons, ammunition and grenades to the YPG in northern Syria's Hasakah province, along with 112 pallets, which reportedly contained ammunition for M-16s and AK-47s. Since then, thousands of trucks have been provided to the terrorist group, including heavy weapons.

The U.S. Defense Department has recently announced that Washington will provide weapons aid to the YPG next year worth $500 million.

The YPG is the Syrian affiliate of the PKK, a globally recognized terrorist group that has been waging a separatist war against the Turkish state for decades. Recently, U.S. President Donald Trump promised in a phone conversation with President Recep Tayyip Erdoğan that he would not send weapons to the YPG anymore.That being said, a couple days following Trump and Erdoğan's phone conversation, the Pentagon announced on Nov. 27 that the U.S. will continue its partnership with the Syrian Democratic Forces (SDF), which includes YPG terrorists. The Pentagon also said they had previously told Turkey that the arms provided to the SDF would be "limited, mission-specific and provided incrementally to achieve military objectives."

Another significant point on Akar's agenda is reportedly Turkey's possible operation against YPG-held northern Syrian town of Afrin, which borders Turkey. He will also ask the U.S. to put an end to its support for the YPG in the area. Akar will also convey Ankara's reservations regarding the U.S. presence in the town.

The Turkish military is gearing up for an offensive against the YPG-held town, according to Turkish media. Foreign Minister Mevlüt Çavuşoğlu said Tuesday that Turkey could imminently carry out a military operation against Afrin.

"Our target could be the [Bashar] Assad regime if they pose a threat to us. Currently, the main threat is coming from the YPG," he said. YPG terrorists in Afrin have occasionally carried out cross-border attacks against the Turkish military despite the presence of American and Russian representatives and military experts in the area.