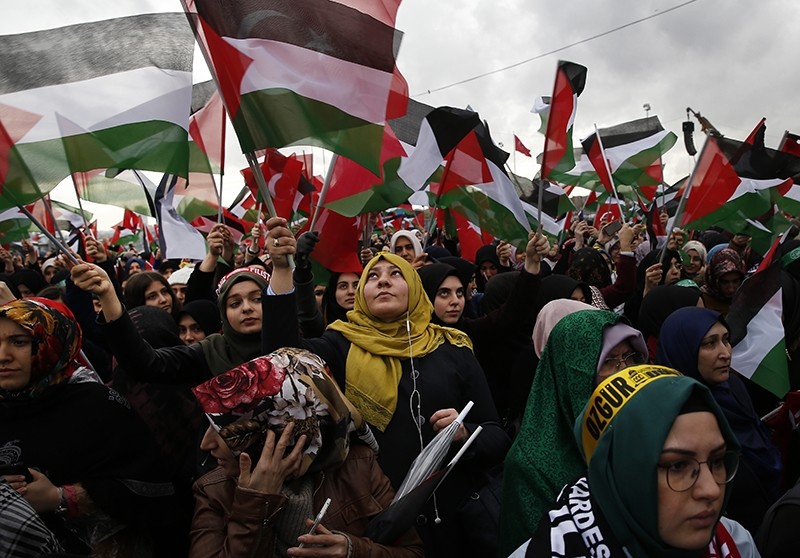 Protesters, holding Turkish and Palestinian flags, participate in a rally against U.S. President Donald Trump's decision to recognise Jerusalem at the capital of Israel, in Istanbul, Sunday, Dec. 10, 2017. (AP Photo)
by Daily Sabah with Agencies Dec 15, 2017 12:00 am

Turkey is starting initiatives at the United Nations to annul a decision by the United States to recognize Jerusalem as Israel's capital, a move which has faced strong opposition from the international community, President Recep Tayyip Erdoğan said on Friday.

Addressing crowds gathered in the central Anatolian city of Konya at a rally for Jerusalem, known as al-Quds by Muslims, the president said via teleconference that Turkey would first seek the annulment of the U.S. decision in the U.N. Security Council, and if that fails, the next step would be to apply to the U.N. General Assembly.

"We have shown that our brothers in al-Quds are not alone. We are launching new initiatives at the U.N for the annulment of the U.S. decision. No country in the world is above international laws," Erdoğan said, and continued by adding that the Muslim world's opposing stance is not a retaliation, but rather, a "struggle for justice."

"Separately, we are starting initiatives to increase [the number of] states who recognize the state of Palestine," he stressed.

On Dec. 6, U.S. President Donald Trump announced his decision to recognize Jerusalem as Israel's capital and relocate the U.S. Embassy from Tel Aviv to the holy city.

The shift in longstanding U.S. policy on Jerusalem sparked angry demonstrations in the occupied Palestinian territories and many Muslim countries.

Rebuffing the move, an extraordinary Organization of Islamic Cooperation (OIC) summit in Istanbul this week declared East Jerusalem to be Palestine's capital.