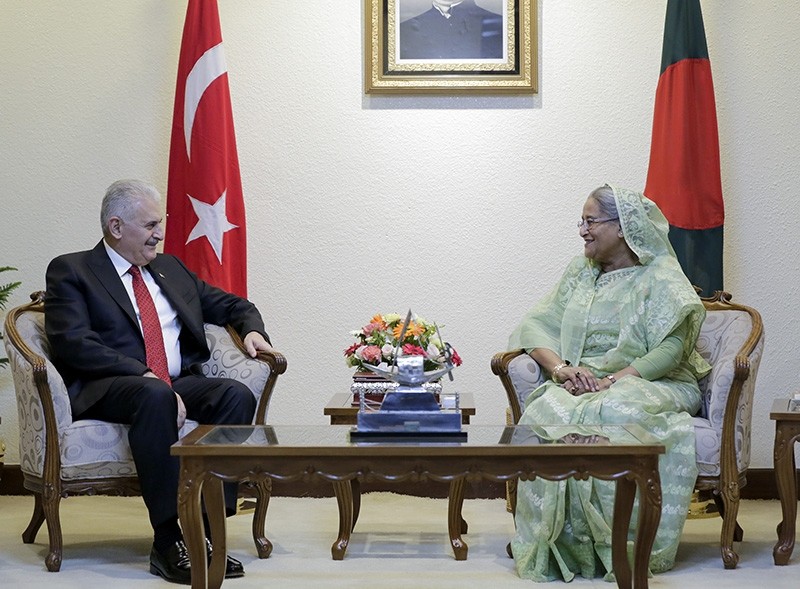 Prime Minister Binali Yıldırım has ensured that Turkey's support to over 1 million Rohingya who took refuge in the neighboring Bangladesh will continue until a political solution is reached for the crisis.

"We will continue our support to the Rohingya refugees who have been trying to live under difficult conditions until a long-term political solution is reached," he said at a press conference in Dhaka Tuesday with Bangladeshi Prime Minister Sheikh Hasina.

Yıldırım visited Bangladesh in an effort to enhance bilateral relations and observe the conditions at the refugee camps to provide Turkey's support.

Explaining that Turkey is ready to provide any support necessary to Bangladesh as it is saddled with a difficult task of addressing the needs of refugees, Yıldırım said Turkey will contribute to the efforts in health, education and shelter with its organizations, including the Turkish Cooperation and Coordination Agency (TİKA), Disaster and Emergency Management Authority (AFAD) and Turkish Red Crescent.

"It is necessary for the international community, especially the U.N. to acknowledge that Bangladesh is not the only country responsible for the resolution of the Rohingya issue" Yıldırım said.

Following a military crackdown in Myanmar's Rakhine state on Aug. 25, an exodus of refugees sought shelter in Bangladesh. The total number of refugees has reached to 800,000 on the Bangladeshi border and the government has been struggling to meet the basic needs of the refugees.

During the ongoing crisis, more than 100,000 houses have been burned and nearly 3,000 people have been killed. The U.N. documented mass gang-rape, killings, including infants and children, brutal beatings and disappearances.

Turkish authorities suggested building a camp on thwe Bangladeshi border to ease the difficult living conditions of the Rohingya.

Welcoming the political efforts by Bangladesh to help Rohingya refugees, Yıldırım said: "The international community, particularly the United Nations, should take more effective steps and stop considering the issue as a problem of Bangladesh."

He touched on bilateral ties between the two countries, saying he discussed with Hasina how Turkey can contribute to Dhaka's growth and development.

Hasina said they had a "very fruitful" discussion with the Turkish delegation on bilateral and international issues.

"We reiterated our commitment to work closely and support each other in bilateral and international issues of major concern," she added.