Erdoğan says UAE's slanders about Turks, Ottomans stem from its own dirty business 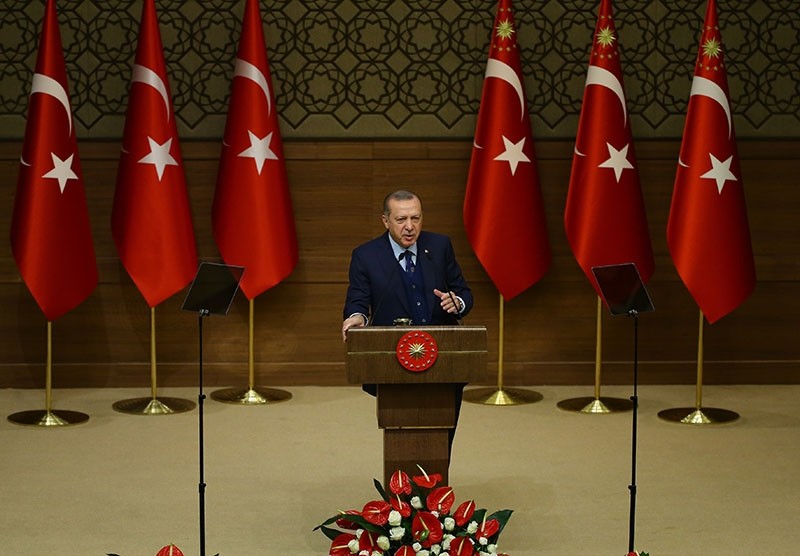 Emirati Foreign Minister Abdullah bin Zayed al-Nahyan's recent re-tweet accusing Ottomans during World War I of committing crimes against the locals has received harsh criticism from President Recep Tayyip Erdoğan, who said the Ottomans had done nothing but serve to protect the holy cities of Islam.

Addressing local headmen Wednesday in the Presidential Palace complex in Ankara, Erdoğan asked: "While Fahreddin Pasha was conducting the defense of Medina, you, the miserable one slandering us, where were your ancestors?"

On Tuesday, Nahyan re-tweeted a post from an Iraqi man from Germany, according to his profile, on his official account, which said: "Did you know that in 1916, Turkish Fahreddin Pasha committed a crime against the people of Medina, stole their properties, and put them on a train en route to Damascus and Istanbul? Also the Turks stole the handwritten books in Mahmoudia Library and took them to Istanbul. This is the history of Erdoğan's ancestors and what they did to Muslim Arabs." The post Nahyan re-tweeted accuses Fahreddin Pasha, an Ottoman military governor of Medina who served from 1916 to 1919, of committing crimes against the local population, including stealing their property and the sacred relics of the Prophet Muhammad's tomb.

"The works carried out by Fahreddin Pasha during his defense in Medina, which lasted two years and seven months, his determined stance and resistance until the very last moment is really praiseworthy. You unfortunates are in a state of delirium so much that you shamelessly claim my ancestors had stolen sacred relics from there and brought them to Istanbul. This is not stealing, in fact, this is protecting them from those who came there to invade, to occupy," Erdoğan said, asserting that those who accuse Turks and Ottomans in this regard show no efforts for the return of the sacred relics that were brought to Western countries.

In May 1916, as World War I was ongoing with the Ottoman Empire siding with the Austro-Hungarian Empire and Germany, several Arab tribes led by Sharif Hussein ibn Ali of Mecca and backed by the British revolted against Ottoman rule in which British spy Thomas Edward Lawrence played a major role. However, a significant number of Arab tribes did not join the revolt and continued supporting the Ottomans against the British-led Allied troops advancing in Palestine and Iraq. In addition, the Ottomans conscripted thousands of Arabs to fight in their ranks.

To avoid the destruction of holy relics, Fahreddin Pasha organized a train guarded by 2,000 men and transferred them to Istanbul. They are being displayed in the Sacred Relics section of the Topkapı Palace Museum.

Despite hit-and-run attacks by poorly organized Arab troops, which caused heavy casualties on both sides and disrupted transportation, Ottoman troops largely managed to hold their positions in Hejaz.

However, the situation became hopeless when the front in Gaza collapsed under British attacks from Egypt's Sinai in late 1917, while Arab forces managed to cut Ottoman territories two months earlier in July through a raid on Aqaba. The garrison in Medina led by Fahreddin Pasha withstood the attacks and siege conditions until Jan. 10, 1919, continuing their resistance even after the Armistice of Mudros was signed between the Ottomans and Allied powers on Oct. 30, 1918.

For his role, Fahreddin Pasha is generally regarded highly in Turkey, honored with nicknames such as "Hero of Medina" and "Defender of Medina."

Erdoğan said that the animosity of some rulers in some Arab countries stems from efforts to cover their own incapability, incompetence or betrayal.

"Rulers of some countries who don't know their place, history or diplomatic courtesy, cannot cast their shadow with our brotherhood with Arab peoples. We will not leave the scene to those who denigrate unity of Muslims for the sake of their own personal gains," he said.

The president added: "We know very well what [plans] those who talk against this distinguished figure in our history and his glorious resistance in Medina are plotting today and with whom, where and how. A time will come when we will explain all of this."

Underlining the friendly relations between Arab and Turkish peoples, presidential spokesman İbrahim Kalın on Tuesday also slammed the post. He described it as "a propaganda lie that seeks to turn Turks [and] Arabs against one another" and called it a shame.

"It was Fahreddin Pasha who bravely defended Madina [sic] against the British plans then. Is attacking President Erdoğan at all costs the new fashion now?" Kalın added.

The United Arab Emirates (UAE) has been accused of supporting plots in Turkey against the Turkish government as well as Ankara's role in the broader region.

The two countries also do not share the same view on the recent crisis in Qatar. Turkey has voiced its support for Qatar as some regional countries, including the UAE, imposed sanctions on the country, claiming that it was ignoring terrorist activities. Ankara has been at the forefront of providing aid to Qatar to meet the basic needs of the people. Turkey also wants to enhance military ties with the country, conducting joint military exercises at its base in Doha.