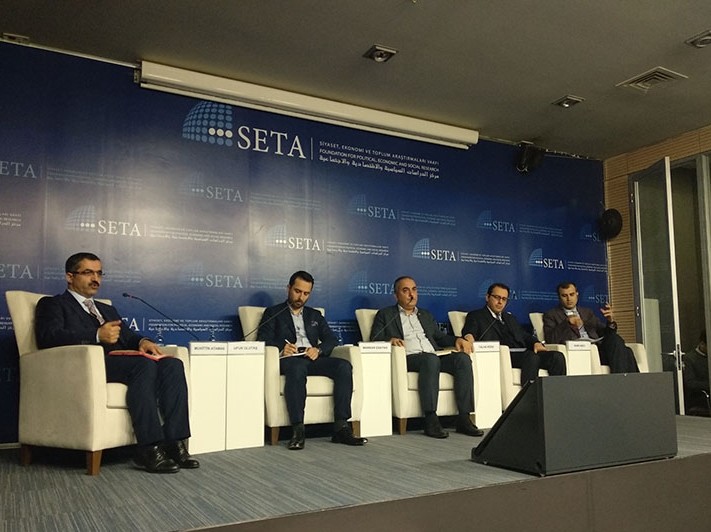 The U.S. President Donald Trump's controversial move on Jerusalem is an opportunity for the international community in raising the awarness on the cause of Palestine, participants at a panel on the recent crisis on the issue have said.

Justice and Development Party (AK Party) Istanbul Deputy Markar Esayan has said that U.S. President Donald Trump's recognition of Jerusalem as Israel's capital, which sparked global opposition, might also be an opportunity to raise global consciousness of the Palestinian issue. "Unfortunately, the Palestinian issue was about to be forgotten in the global arena, but it became one of the main points of international politics after the OIC's [Organisation of Islamic Cooperation] Istanbul declaration," Esayan said at the panel "How to Resolve the Jerusalem Crisis," organized by the Foundation for Political, Economic and Social Research (SETA) in Ankara on Dec. 20. Thus, Trump's Jerusalem move might be an opportunity to raise global consciousness for the Palestinian issue," he added. Explaining that the state of Palestine has to be strengthened economically and politically, Esayan said that international efforts that pave the way for Palestine's recognition are also important.

Associate professor Talha Köse from İbni Haldun University stressed the U.S's role in the Palestinian issue and said the U.S has to pressure Israel for a resolution, not Palestinians. "This is the only way to solve the problem," Köse said. He added that the Trump administration's decision is against U.S interests and that U.S. isolation at the U.N. and other international organizations would lead discussion in U.S domestic politics.

Ufuk Ulutaş from the SETA Foreign Policy Department stressed that Israel will be the biggest loser for continuing occupation of Palestinian territory. "Israel seems like it considers the U.S's recent decision and continuing occupation of Palestinian territory as a win. However, this move undermines the state of Israel in the long run," Ulutaş said.

Underlining the importance of establishing a fund that could be called the "Jerusalem Fund" to support a Palestinian state, Ulutaş said: "The use of such a fund to build and support state institutions for the Palestinian state and preservation of the cultural and historical heritage of Palestine is essential to undermine Israel's efforts against Palestine and its people."