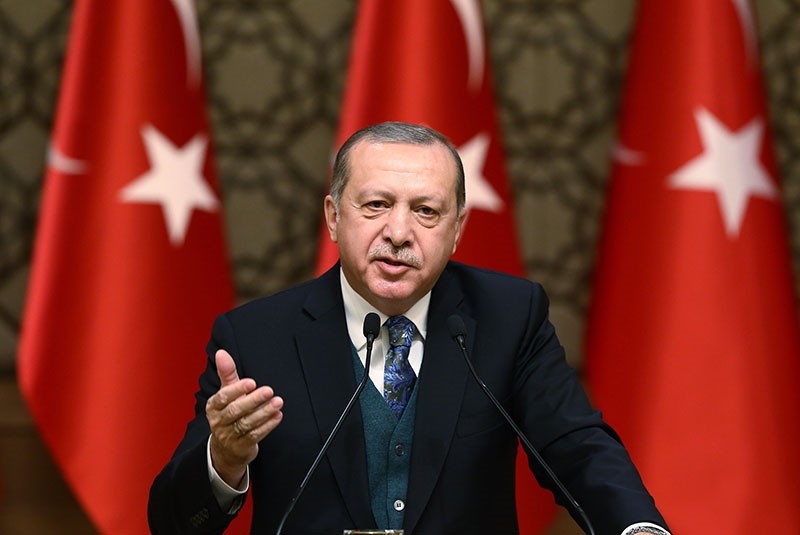 President Recep Tayyip Erdoğan said Thursday the Ottomans had safeguarded the holy relics against the invaders of the holy city of Medina and that the recent move by the UAE foreign minister was nothing but slander.

"While my ancestors conducting the defense of Medina where were your ancestors?" President Erdoğan asked speaking in a ceremony Thursday, while he underlined that Fahreddin Pasha served in the region for three years and that he later brought the holy relics to Istanbul with nearly 2,000 soldiers to protect them in case of an occupation by the British.

On Tuesday, Nahyan retweeted a post from an Iraqi man from Germany, according to his profile on his official account that said: "Did you know that in 1916, Turkish Fahreddin Pasha committed a crime against the people of Medina, stole their properties, and put them on a train en route to Damascus and Istanbul? Also the Turks stole the handwritten books in Mahmoudia Library and took them to Istanbul. This is the history of Erdoğan's ancestors and what they did to Muslim Arabs."

The post Nahyan retweeted accuses Fahreddin Pasha, an Ottoman military governor of Medina, who served from 1916 to 1919, of committing crimes against the local population, including stealing their property and the sacred relics of Prophet Muhammad's tomb.

Erdoğan highlighted the importance of knowledge of the past and said: "If we do not know Fahreddin Pasha and the defense of Medina, one despicable person would come out and call Erdoğan's ancestors 'thieves.'"

On late Thursday, the Ministry of Foreign Affairs summoned the charge d'affaires of United Arab Emirates to Ankara to convey Turkey's reactions against Nahyan's Twitter post.

Commenting on the issue, historian Professor Zekeriya Kurşun said the move is an attempt to target President Erdoğan directly, and the actual aim is not the lies about Fahreddin Pasha. "Fahreddin Pasha is known for his heroism among the Arabs for the defense of Medina. It is also the Arabs who have given him the nickname of 'Lion of the Desert.' It is still possible to hear poems about Fahreddin Pasha in the desert. As such, the actual aim of the slander against Fahreddin Pasha, a figure also known and liked among the Arabs, is not the Pasha, but rather, it is the Republic of Turkey and its President Recep Tayyip Erdoğan," Kurşun was quoted as saying by Anadolu Agency (AA) during an event in Istanbul yesterday.

Meanwhile, opposition Republican People's Party (CHP) chair Kemal Kılıçdaroğlu stated also voiced criticism regarding the issue saying that "Turkey should recall its ambassador and ties should be severed until the foreign minister apologizes."

CHP Spokesperson Bülent Tezcan also lashed out at the UAE foreign minister for his recent retweet: "The disgraceful rhetoric used against a historic person, Fahreddin Pasha, who played a key role in defending Medina and today's Turkey is unacceptable."

He underlined that many Turkish people struggled mightily at the cost of losing their lives in the region to protect the holy lands. Tezcan condemned the post retweeted by the foreign minister saying, "We want to point out that no one has right to slander Turkey and its history."

Qara Daghi's praise came in a tweet in which he also indirectly criticized the UAE foreign minister, saying, "The Ottomans have the honor of having established a great Muslim civilization and spreading Islam across the world."

The head of the largest umbrella organization for Muslim scholars, Qara Daghi went on to assert that the Ottomans had striven to safeguard "the blessed land of Palestine" and had "not given up a single grain of sand thanks to Sultan Abdul Hamid II."

He added: "But during the period of Arab nationalism, Palestine, including Jerusalem and the blessed Al-Aqsa Mosque, were occupied [by the Zionists]."

In May 1916, as World War I was ongoing with the Ottoman Empire siding with the Austro-Hungarian Empire and Germany, several Arab tribes led by Sharif Hussein ibn Ali of Mecca and backed by the British revolted against Ottoman rule in which British spy Thomas Edward Lawrence played a major role. However, a significant number of Arab tribes did not join the revolt and continued supporting the Ottomans against the British-led Allied troops advancing in Palestine and Iraq. In addition, the Ottomans conscripted thousands of Arabs to fight in their ranks.

To avoid the destruction of holy relics, Fahreddin Pasha organized a train guarded by 2,000 men and transferred them to Istanbul. They are currently displayed in the Sacred Relics section of the Topkapı Palace Museum.

Despite hit-and-run attacks by poorly organized Arab troops, which caused heavy casualties on both sides and disrupted transportation, Ottoman troops largely managed to hold their positions in Hejaz.

However, the situation became hopeless when the front in Gaza collapsed under British attacks from Sinai, Egypt, in late 1917, while Arab forces managed to cut Ottoman territories two months earlier in July through a raid on Aqaba. The garrison in Medina led by Fahreddin Pasha withstood the attacks and siege conditions until Jan. 10, 1919, continuing their resistance even after the Armistice of Mudros was signed between the Ottomans and Allied powers on Oct. 30, 1918.