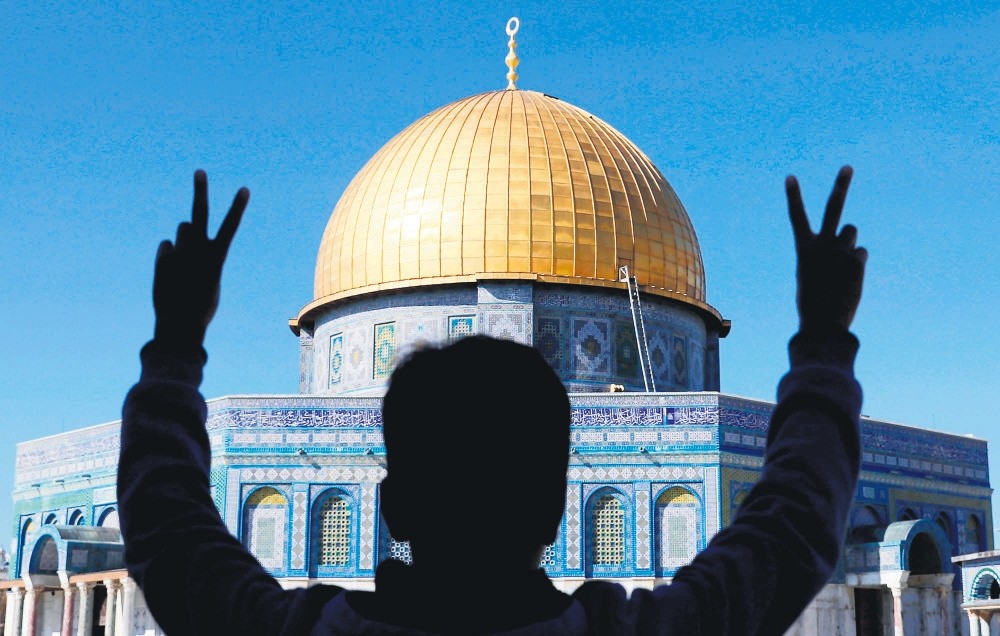 Jerusalem, holy for all three Abrahamic religions, is at the heart of the wide range of debates after U.S. President Trump's decision on Oct. 6 to recognize the city as Israel's capital.
by Daily Sabah Dec 21, 2017 12:00 am

A draft resolution on Jerusalem is expected to be voted on at an emergency session of the U.N. General Assembly today with the participation of FM Çavuşoğlu and Palestinian FM al-Maliki

The U.N.General Assembly is holding an emergency session today, requested by Turkey and Yemen on behalf of the Arab group of countries and the Organisation of Islamic Cooperation (OIC), to vote on a draft resolution rejecting U.S. President Donald Trump's decision to recognize Jerusalem as Israel's capital after the United States vetoed the measure at the U.N. Security Council (UNSC). Turkey and Yemen circulated a draft resolution on Tuesday that mirrors the vetoed measure, reaffirming that any decision on the status of Jerusalem has no legal effect and must be rescinded. Egypt had put forward the draft at the UNSC, which was backed by all 14 other members in the vote on Monday.

Like the Egyptian draft, the text before the assembly does not mention Trump's decision but expresses "deep regret at recent decisions concerning the status of Jerusalem." Foreign Minister Mevlüt Çavuşoğlu will participate in the planned General Assembly vote on Jerusalem today on behalf of Turkey. Palestinian Foreign Minister Riyad al-Maliki will be arriving in New York with Çavuşoğlu. Palestinian permanent observer to the U.N. Riyad Mansour said he expected overwhelming support for the measure, stating that Jerusalem is an issue "to be resolved through negotiations" between Israel and the Palestinians. "The General Assembly will say, without the fear of the veto, that the international community is refusing to accept the unilateral position of the United States," Mansour told reporters.

Not only Muslims but Christians are also "very disturbed" by the U.S. decision on Jerusalem, said Foreign Minister Çavuşoğlu said.

Speaking at a joint press conference with his Palestinian counterpart Riyad El-Maliki in Istanbul yesterday ahead of their trip to the U.S., Çavuşoğlu said they are expecting strong support at the voting session in the U.N. General Assembly tomorrow, since not only Muslims but Christians are also against Trump's move.

The decision was voted on on Tuesday at the UNSC, but the U.S., as a permanent member, vetoed the draft resolution on the status of Jerusalem.

In the 193-nation General Assembly, however, no country has veto powers, contrary to the UNSC where the United States, Britain, China, France and Russia can block any resolution.

The U.S.'s veto on Tuesday, the sole dissenter of the 15-member UNSC, has left the U.S. alone in the international arena. In addition, the shift in longstanding U.S. policy on Jerusalem has sparked angry demonstrations in the occupied Palestinian territories and many Muslim countries.

In the meeting, Abbas briefed the Saudi king on the steps he is taking to "safeguard Jerusalem from the threats it is facing," according to Palestine's official WAFA news agency.

In t the meeting, Abbas praised what he described as "the international consensus in support of the Palestinian people and cause and rejection of the U.S. decision [on Jerusalem]."

Germany repeated its opposition on the issue and said EU members are discussing a joint position ahead of a key vote at the U.N. General Assembly.

"The German government is aiming to reach an EU consensus and voting according to this, as has been the case with similar resolutions on the Middle East. Consultations are currently underway," he said.

The top Roman Catholic cleric Apostolic Administrator of Jerusalem Archbishop Pierbattista Pizzaballa also said yesterday that the status of Jerusalem should not be altered by "unilateral decisions," amid protests over the U.S. move.

Pizzaballa said in a statement yesterday that "unilateral decisions will not bring peace, but rather will distance it. Jerusalem is a treasure of all humanity. Any exclusive claim – be it political or religious – is contrary to the city's own logic."

Regarding the issue, presidential spokesman İbrahim Kalın said Tuesday that Turkey would resume intense efforts until the day of the vote for the Jerusalem decision to be accepted at the U.N. General Assembly.

"In the case of a two-thirds majority, and we think with great probability that this majority will be formed, it will be confirmed in the U.N. that the Jerusalem decision by the Trump administration is unlawful," he said.

Meanwhile, French President Emmanuel Macron made a statement on the issue Tuesday while discussing it with Jordanian King Abdullah II in Paris, saying that both countries are awaiting U.S. input before pressing ahead with any peace initiatives following U.S. President Donald Trump's decision to recognize Jerusalem as Israel's capital.

The two leaders reaffirmed their condemnation of the decision, insisting that the first half of 2018 would be crucial for the region.

"We don't agree with the unilateral move by the Americans to recognize Jerusalem as the capital, but we want to see the full initiative put on the table," Macron told a joint news conference with Abdullah.

"We will lend our support to any useful initiative," Abdullah said, adding that they will be waiting in the next few months on "our American friends."

"Palestinians must be able to establish their independent state with east Jerusalem as its capital, a state that lives side by side with the state of Israel," Abdullah added.

Macron will hold talks with Palestinian Authority President Mahmoud Abbas in Paris after he met with Israeli Prime Minister Benjamin Netanyahu on Dec. 10.

The French leader said France "will maintain contact with everyone in the region".