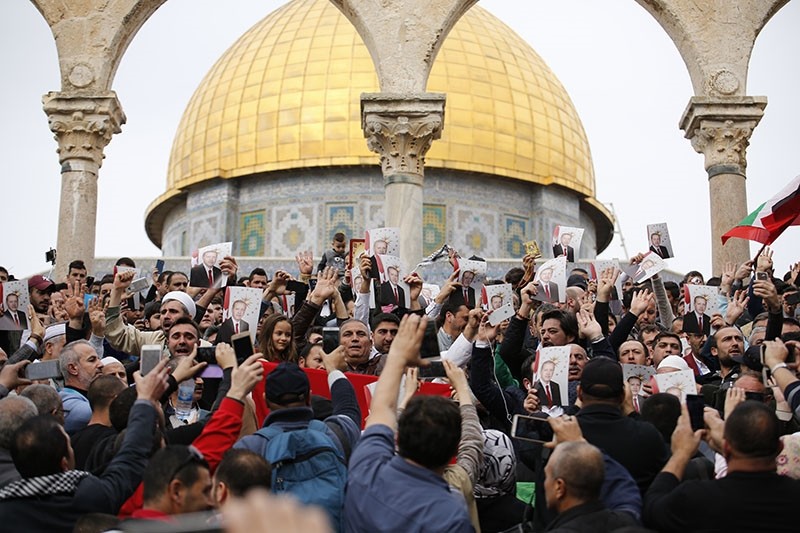 Palestinians, carrying a Turkish flag and posters of President Recep Tayyip Erdou011fan, gather at the yard of Haram al-Sharif complex after Friday prayers in Al-Aqsa Mosque, with the Dome of the Rock Moqsue in the background. (AA Photo)
by Daily Sabah with Agencies Dec 22, 2017 12:00 am

The historic vote on the Jerusalem resolution at the United Nations General Assembly has reminded the United States that it can no longer impose its policies against the will of the international community, President Recep Tayyip Erdoğan said on Friday. He also reiterated his mantra, the world is bigger than five, referring to the five permanent members of the U.N. Security Council (UNSC), but this time he added: "and much bigger than the one," referring to the loneliness Washington faced on Thursday.

"The world is bigger than five [and] much bigger than one," Erdoğan said in a speech at a meeting of provincial chairmen of the Justice and Development Party (AK Party) in Istanbul. The president has previously railed against the dominance of the five permanent members of the UNSC.

Minutes after the vote result was announced, Erdoğan also posted a message on his official Twitter account: "We said Jerusalem is our red line," with a photo of himself and a Palestinian boy with Down syndrome who had received media attention after he was held by Israeli forces during protests. Mohamed al-Taweel was arrested by Israeli security forces on Dec. 10 in the West Bank town of al-Halil during protests against U.S. President Donald Trump's decision to recognize Jerusalem as Israel's capital. He was later brought to Turkey.

Prior to the vote on Thursday, the resolution was also voted on at the UNSC. However, it did not pass when the U.S. used its veto. However, the 14 to 1 result was still interpreted as a unified stance against Trump's controversial decision on Dec. 6 to recognize Jerusalem as Israel's capital city instead of Tel Aviv.

Palestinians claim east Jerusalem, home to Muslim, Jewish and Christian holy sites and an area Israel captured and annexed in 1967 in the Six-Day War, as the capital of a future state. The international community said the status of Jerusalem should be decided in negotiations between Israel and the Palestinians.

Against the international community's opposition, the U.S. administration, including Nikki Haley, the U.S. ambassador to the U.N., and the president himself, threatened to cut financial aid to countries that vote for the resolution, a move interpreted by many as undemocratic.

The nonbinding resolution declaring U.S. action on Jerusalem "null and void" was approved 128 to 9 – a victory for Palestinians, but not as big as they had predicted. Amid Washington's threats, 35 of the 193 U.N. member states abstained and 21 were absent.

Erdoğan said that the countries that abstained from or skipped the U.N. General Assembly vote most likely wanted to vote against the U.S. decision on Jerusalem but were threatened by the White House.

"Last minute estimates predicted a result of 160 to 190 for [the resolution], but the White House started making telephone calls. They threatened, openly threatened these countries one by one," he said.

"It should be known that democracy is not a perception, a system or a regime where you can buy will," Erdoğan said, criticizing the U.S. threats prior to the vote. He added:, "The U.N. General Assembly displayed an honorable stance by accepting the resolution with 128 votes for and 9 against in spite of the threats."

With the exception of Israel, the top recipients of international aid are Muslim, Arab or African countries. Afghanistan, Egypt, Jordan and Pakistan all voted to back the resolution proposed by the Palestinians, as did African countries Nigeria, Ethiopia, Tanzania and South Africa.

In addition to Israel, the only member of the top-10 U.S. aid recipients not to support Palestine was Kenya, a close Israeli ally that skipped the vote, according to Foreignassistance.gov.

The U.N.'s history regarding Palestine dates back to 1947, a year before Israel was founded. Since that day, the U.N. has released nearly 100 resolutions in relation to Palestine and its conflict with Israel, the first one of which is the recommendation of the partition plan in 1947 with Resolution 181. The U.N. opted for a special status, as Jerusalem is holy to Jews, Christians and Muslims. Although Israel has been a member of the U.N. since 1949, Palestine has only been an observer state since 2012.

The Organisation of Islamic Cooperation (OIC), under Turkey's term presidency, also convened for an emergency meeting in Istanbul on Dec. 13 and declared after the summit that member states will not recognize the U.S. decision on Jerusalem and that it would be considered "null and void."

Erdoğan and Russian President Vladimir Putin agreed Friday in a phone call that the Israeli-Palestinian conflict needs to be resolved on an equal basis, presidential sources said Friday.

Erdoğan thanked Putin for Russia's support on the Jerusalem issue both at the UNSC and at yesterday's vote.

The two leaders also said that they are pleased with the outcome of the U.N. vote, saying that an important step was taken in declaring the U.S. recognition null and void.

Erdoğan and Putin said that the U.S. should stick to the U.N resolution and international law in the matter of Jerusalem, as the city is of great significance to regional peace and stability.

Abbas: US no longer mediator

Palestinian Authority President Mahmoud Abbas said Friday that his people would no longer accept any peace plan proposed by the United States following Washington's decision to unilaterally recognize Jerusalem as the capital of Israel.

"The United States has proven to be a dishonest mediator in the peace process, and we will no longer accept any plan from the United States," Abbas said after meeting with French President Emmanuel Macron in Paris.

Macron in Paris underlined his previous stance on the issue, condemning the U.S. decision on Jerusalem, but he also said that France will not recognize Palestine as a state unilaterally.

"The Americans have marginalized themselves, and I am trying to not do the same thing," Macron told the joint press conference with Abbas.

He added: "The solution will be built around two states, so inevitably there will be a moment in the process when there is recognition. I want to do it at a moment that will help build peace on the ground."

Macron has also ruled out launching a new French peace initiative in the near future, saying he is waiting to see what happens with the American effort that Abbas rejected on Friday.

The 40-year-old French leader has stepped up his meetings with leaders from the Middle East in recent weeks, hosting Israeli President Benjamin Netanyahu in Paris less than a fortnight ago. Jordanian King Abdullah II visited on Thursday, the day before Abbas's arrival. Macron said he would visit the Palestinian territories in 2018. Other European Union leaders have also voiced strong opposition to Trump's unilateral decision on the historic city, saying the status of Jerusalem should be decided by Palestinians and Israelis.

The three most important countries in Europe – Britain, France and Germany – all voted against the U.S. That could signal trouble if the U.S. seeks European support for its peace plan down the road.

Other European countries with close ties to Israel, including Poland, Hungary and the Czech Republic – all with nationalist governments – abstained in the vote.

These divisions in Europe could complicate attempts by the European Union to formulate a joint position on the Israeli-Palestinian conflict moving forward.

Iran: Global no to US intimidation

Iran's foreign minister welcomed the U.N. General Assembly resolution, calling it a "global no" to intimidation from Trump.

Mohammad Javad Zarif tweeted after the vote that the resolution soundly criticizes "the Trump regime's thuggish intimidation at U.N."

African countries and rights groups welcomed the U.N. General Assembly's decision to reject the U.S. move to recognize Jerusalem as the official capital of Israel.

Despite Trump's threats to cut aid, several African countries supported the resolution nonetheless, with only Togo voting against it.

The government of Botswana reacted bitterly to a letter sent by the U.S. "Botswana, will not be intimidated by such threats and will exercise her sovereign right and vote based on her foreign policy principle," the Foreign Ministry said on Thursday.

"They need to know that the world recognizes the injustices meted on Palestine by Israel in cohort with the U.S.," he said.

Uganda, which abstained from the vote, could in theory risk losing $436 million in U.S. aid for the 2018 financial year.

"We did the right thing by voting to reject the U.S.'s unilateral and unhelpful position on Jerusalem," a Nigerian diplomat said on condition of anonymity as he is not authorized to comment on the matter.

Kenya's government spokesman, Erick Kiraithe, told Anadolu Agency (AA) that his country, which boycotted the vote, could not comment on the matter.

Netanyahu said in a video posted on Facebook that Jerusalem "always was, always will be" Israel's capital. He also said he appreciates that "a growing number of countries refuse to participate in this theater of the absurd."

Netanyahu also thanked Trump for his "stalwart defense of Israel."

The Israeli prime minister has made significant outreach in recent years to countries in Africa, Asia and Latin America in a bid to soften support for Palestine at the U.N.

Those efforts showed some signs of success. After the vote, Netanyahu said he appreciated the growing number of countries that "refused to participate in this theater of the absurd."

Mexico and Argentina, countries that Netanyahu visited earlier this year, both shifted from past support for Palestine to abstentions on Thursday. Two Central American countries, Guatemala and Honduras, voted against Thursday's measure.

While Kenya skipped the vote, Uganda and South Sudan – both countries courted by Netanyahu – also dropped their past support for Palestine and abstained.

A possible concern for Israel could be the apparent support from two countries with poor human rights records – Myanmar, which skipped the vote, and the Philippines, which abstained. Both countries voted with Palestine in 2012.