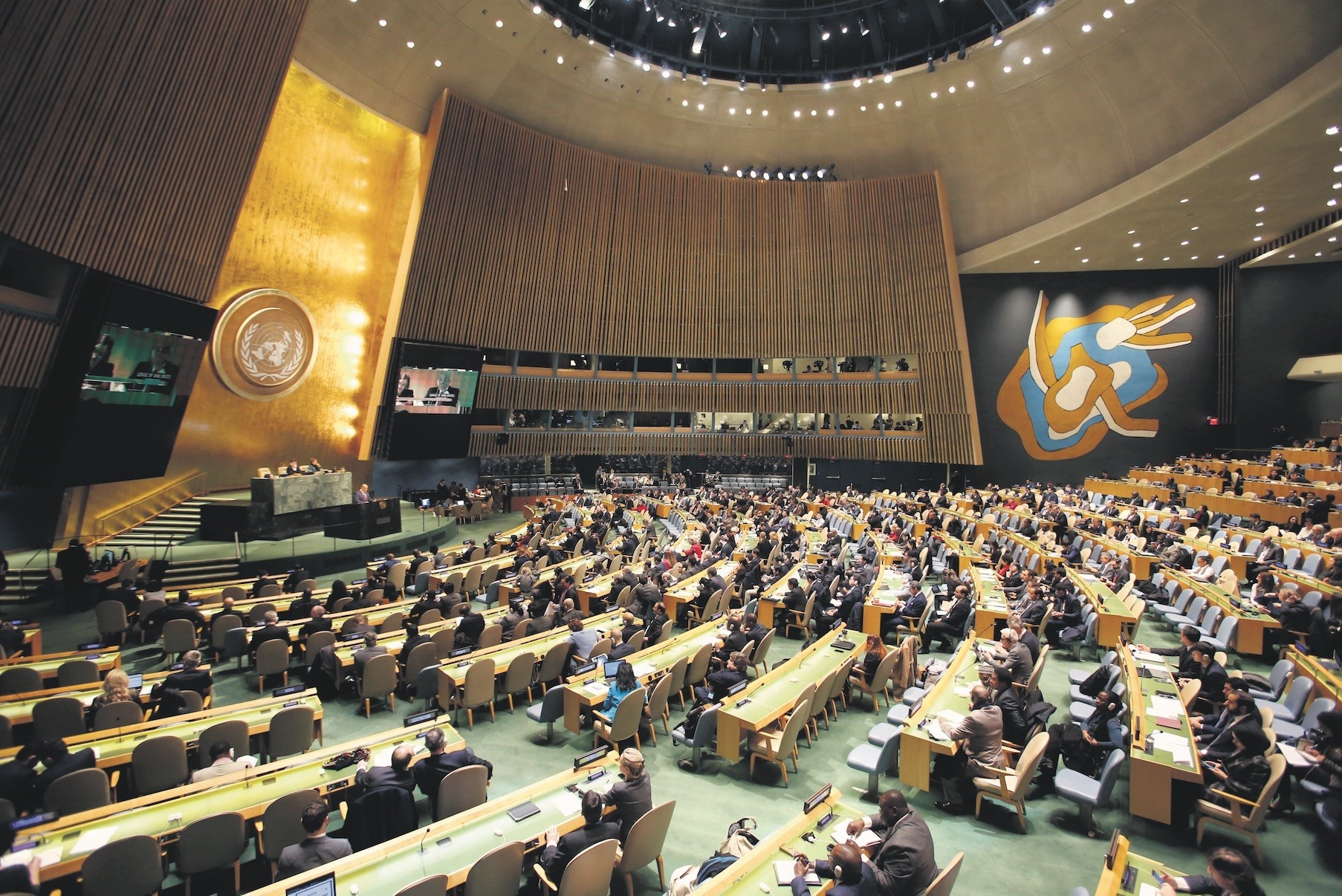 The U.S. has found itself alone following a U.N. vote condemning Trump's move on Jerusalem, with a large majority of the international community positioning itself opposite the Washington

During an emergency session Thursday in New York, the majority of the 193-member U.N. General Assembly voted on the U.N.'s call for the U.S. to withdraw from its decision to recognize Jerusalem as the capital of Israel, with 128 votes in favor, nine against and 35 abstentions, uniting the international community on the issue while leaving the U.S. and Israel alone despite their intense lobbying that has included undemocratic threats to allies. The draft resolution reaffirmed the 10 previous U.N. Security Council (UNSC) resolutions on Jerusalem dating back to 1967, including requirements that the city's final status be decided in direct negotiations between Israel and Palestinians.

The resolution also called to affirming that any actions that "have altered the character, status or demographic composition of the Holy City of Jerusalem" have no legal effect and must be rescinded. It also calls on all states "to refrain from the establishment of diplomatic missions" in Jerusalem. "Although this decision is not binding, the U.N. General Assembly may decide to take some steps in accordance with this outcome. Thus, since world society confronts it, all the U.S.'s further actions on the issue would become illegitimate," said Ahmet Kasım Han, an associate professor at Istanbul's Kadir Has University's International Relations Department. The resolution was co-sponsored by Turkey, term president of the Organisation of Islamic Cooperation (OIC), and Yemen, chair of the Arab Group at the U.N. It is very similar to the defeated UNSC resolution.

Han said: "The U.S. would not step back from the issue, despite being condemned, since this is a matter of prestige. "

The emergency session yesterday is based on U.N. Resolution 377, which enables member states to come up with appropriate suggestions to unite on common measures in case of a lack of unanimity in the UNSC on issues that, for example, pose a threat of war. There have been 10 session in the U.N. regarding that resolution so far, the latest of which was in 2009 on the invasion of Palestine and east Jerusalem.

Muhittin Ataman, an academic from Ankara Social Sciences University, said the vote in the U.N. General Assembly indicated that a significant part of the world has stood out against the U.S., despite threats, making the vote a significant political and diplomatic gain for the international community on Palestine.

Regarding the implications of such an outcome, Ataman said: "The vote will both undermine the role the U.S. is playing as a hegemon in the field of international relations and also the role of President Donald Trump's administration." According to Han, however, thanks to this outcome, the U.S. would degrade from the position of rule-making country to the country that takes position on illegitimate decisions.

During his speech at the UNGC session yesterday, Foreign Minister Çavuşoğlu said that being strong does not make one right.

"Dear friends, the Palestinians have the right to their own state according to the 1967 borders with east Jerusalem as its capital," he said while adding that a vote in favor of Palestine will place us on the right side in history.

"Palestinians have the right to have their own state in accordance with the 1967 borders with east Jerusalem as its capital. This is the main parameter and only hope for a just and lasting peace in the region," he said.

Palestinian Foreign Minister Riad al-Maliki also slammed the controversial step in the session. "Does the U.S. not wonder why it stands so isolated in this position which is being rejected by everyone near and far?" he asked. "And why even its closest allies are turning a blind eye to this decision?"

U.S. Ambassador to the U.N. Nikki Haley, on the other hand, repeated U.S. threats, saying that the U.S. "will remember this day in which it was singled out."

"This vote will make a difference on how Americans look at the U.N., and on how we look at countries who disrespect us in the U.N.," she said.

Ahead of the voting session, the U.S. and Israel pursued intense lobbying to convince member states to vote in favor of the U.S. decision, leaving the international community surprised at how undemocratic a state can be in such a situation. Trump on Wednesday threatened to cut off financial aid to countries that vote in favor of the United Nations draft resolution against his decision to recognize Jerusalem as Israel's capital.

Before Trump, U.S. Ambassador to the U.N. Nikki Haley on Tuesday warned countries that she will report back to the president with the names of those who support the draft resolution rejecting the U.S. decision to recognize Jerusalem as Israel's capital.

In a letter to more than 180 of the 193 U.N. member states' ambassadors and an even tougher tweet on Tuesday, Haley hinted at possible U.S. retaliation, but Trump's comments made clear to recipients of U.S. assistance that billions of dollars could be at stake.

Haley's threat drew sharp criticism from the international community, particularly the Palestinian and Turkish foreign ministers before they flew to New York for the General Assembly vote. They accused the U.S. of intimidation.

In Wednesday's letter, reportedly sent to more than 180 ambassadors to the U.N., Haley said the Trump administration is "simply asking that you acknowledge the historical friendship, partnership, and support we have extended and respect our decision about our own embassy."

She said U.S. Congress decided 22 years ago that Jerusalem should be recognized as the capital of Israel and that Trump followed through on that decision.

"The president will be watching this vote carefully and has requested I report back on those countries who voted against us," she wrote in the letter obtained by The AP. "We will take note of each and every vote on this issue."

Her tweet was sharper: "At the UN we're always asked to do more & give more. So, when we make a decision, at the will of the American ppl, abt where to locate OUR embassy, we don't expect those we've helped to target us. On Thurs there'll be a vote criticizing our choice. The US will be taking names."

This was not the first time that Haley threatened to keep track of U.S. opponents.

On Jan. 27, the day she arrived at the United Nations as ambassador, Haley announced a new way the United States would be doing business. The Trump administration's goal is to show U.S. strength, speak out and defend its allies and, as for countries opposing America, "we're taking names," she said.

The letter on the Jerusalem vote was the first time since then that Haley vowed to compile a list.

Palestinian Foreign Minister Riad Malki, who was in New York for the vote, called the U.S. threats dangerous and predicted that they would not have a major impact. "We believe that there is world consensus against the U.S. decision on Jerusalem. This was clearly reflected in the Security Council, despite the U.S. veto," he told The AP.

On Wednesday, Abbas was meeting with leaders of Saudi Arabia, an influential country believed to have low-level but warming ties with Israel, before heading to France. Saudi King Salman bin Abdul Aziz al-Saud reassured Palestinian Authority President Mahmoud Abbas in a meeting that the kingdom continues to support Palestinian claims to Jerusalem, a government statement said.

Ataman further said the vote against the U.S. decision to recognize Jerusalem as the capital of Israel has already shown that both Muslims and non-Muslims are against the decision and that it is a global problem. In Ataman's opinion, with this vote, the possibility of countries, including Turkey, to relocate their embassies to east Jerusalem might have been increased.

"We have a very, very simple message: Jerusalem is the capital of the Jewish people for 3,000 years and the capital of Israel for almost 70 years," she told Channel 10.

An Israeli Foreign Ministry official confirmed the government was conducting a "very vast" lobbying campaign to minimize the resolution's impact.

He said Israel is trying to persuade allies to abstain or even vote against it. He also said Israel has asked Jewish organizations in certain countries to lobby their governments on Israel's behalf.

The official, speaking on condition of anonymity because he was discussing sensitive diplomatic contacts, refused to identify which countries Israel has approached or say how he expects them to vote, but he said he thinks the campaign will be "successful to a certain extent."

The U.N.'s history regarding the Palestine issue dates back to 1947, a year before Israel was founded. Since that day, the U.N. has released nearly 100 resolutions in relation to Palestine and its conflict with Israel, the first one of which is the recommendation of the partition plan in 1947 with Resolution 181. The U.N. opted for a special status, as Jerusalem is holy to Jews, Christians and Muslims. Although Israel has been a member of the U.N. since 1949, Palestine is only an observer state - since 2012.

Trump shattered decades of U.S. neutrality on Jerusalem on Dec. 6, when he recognized the holy city as Israel's capital and said he will move the U.S. Embassy there.

Trump said the move was not meant to prejudge negotiations on the final borders of the city, and instead merely recognized reality since Jerusalem already serves as Israel's capital. But the announcement was widely perceived as taking the side of Israel in the most sensitive issue of the Israeli-Palestinian conflict.

Palestinians claim east Jerusalem, home to Muslim, Jewish and Christian holy sites, and which Israel captured and annexed in 1967 in the Six-Days War, as the capital of a future state. The international community has said the status of Jerusalem should be decided in negotiations between Israel and the Palestinians.