Bonding with its history, Turkey to revive former Ottoman Suakin Island in Sudan 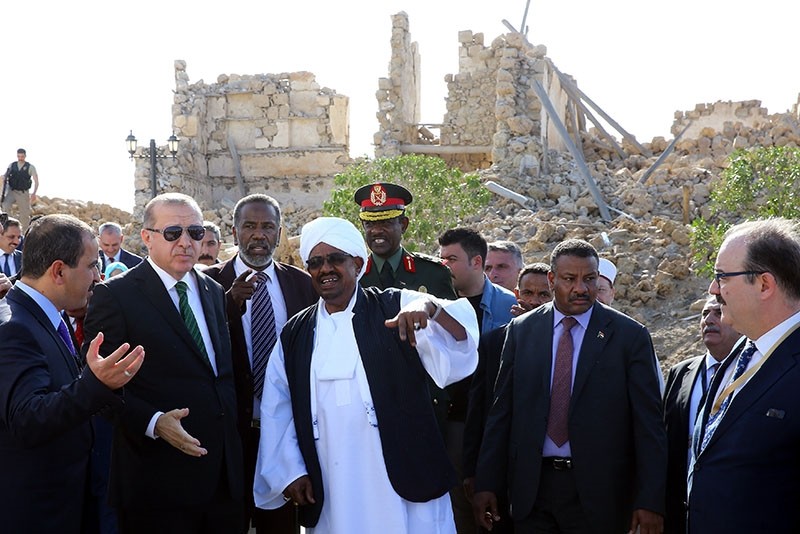 Sudan has agreed to hand over Suakin Island to Turkey for rebuilding, President Recep Tayyip Erdoğan said late Monday while speaking at the Sudan-Turkey Business Forum.

After visiting the island, Erdoğan said earlier on the same day that the island needs rebuilding and called for restoration during a speech in the University of Khartoum, where he was awarded an honorary doctorate. Erdoğan said that Turkey will rebuild and revive the island.

During his official two-day visit to the country, Erdoğan visited several Ottoman sites, including Al-Hanafi Mosque, Al-Shafei Mosque and an old customs building located on Suakin Island. These mosques were restored by the Turkish Cooperation and Coordination Agency (TİKA).

A cooperation and investment agreement between Turkey and Sudan was signed at the customs building.

Speaking at the University of Khartoum on Monday evening, Erdoğan elaborated on his impressions of Suakin Island.

"Seeing the current status of Suakin Island saddened us. The island was totally destroyed. If you assign this island to us, we will restore and make it worthy of its historical glory. Sudan will be proud of this and can take new steps in tourism," Erdoğan said and suggested that the island, when restored and revived, can be a part of the umrah or hajj route as it once was. He cited that pilgrims used to come to Suakin, spend some time on the island and then travel to Jeddah.

The president later announced at the Sudan-Turkey Business Forum that Sudanese President Omar al-Bashir agreed to assign the island to Turkey. Turkey's restoration of the island will be a strong message emphasizing the Turkish-Sudanese partnership.

Until the 19th century, Suakin was the residential address of the Ottoman Empire's Habesh Eyalet, which is today's Eritrea, Djibouti and northern Somalia.

A port city located northeast of Sudan, Suakin was the most significant port in Nubia. After the establishment of Port Sudan, Suakin diminished in importance.

In 1571, when Sultan Selim the Grim conquered Egypt, Suakin also became a part of Ottoman territory and remained as such until the 19th century.

Yemen's Governor Özdemir Pasha, who was appointed to the Habesh governorship in 1554, founded the province of Habesh on July 5, 1555 and declared Suakin Island on the Red Sea coast of Sudan as the provincial center. In the 16th century, this province was affiliated with eight sanjaks.

Fortresses were constructed by the Ottomans for the conservation of the region, and the southern navy was divided into the Indian, Suez and Muha captaincies as the Red Sea became an "Ottoman inner sea."

Suakin became part of Sudan's lands as Sudan gained independence from the British-Egyptian government in 1956.