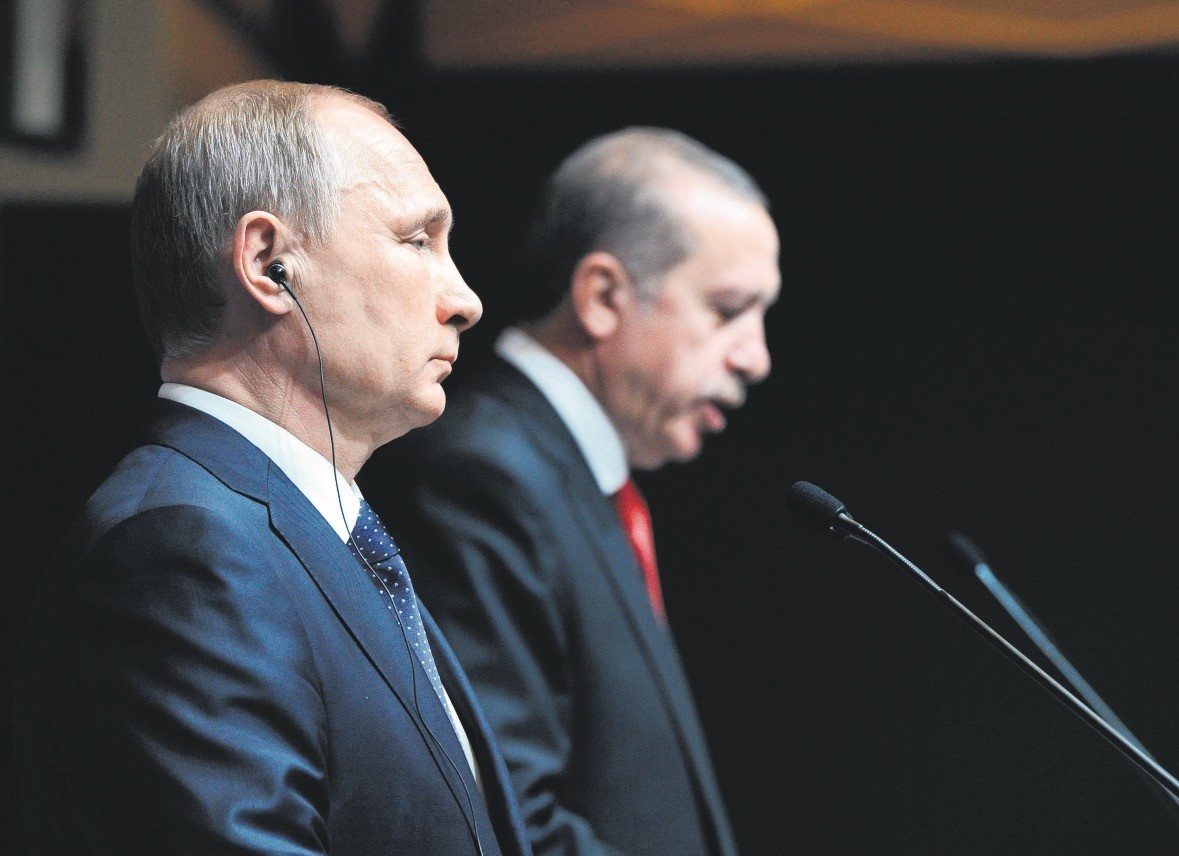 The Caucasus and Asia will likely come to the fore as possible conflict zones in the midterm dependently on more assertive policies pursued by Turkey.
by Mustafa Kırıkçıoğlu Jan 02, 2018 12:00 am

Developing relations between Ankara and Moscow has been interpreted as promising for morphing into a strategic alliance by some, however, tough regional challenges and clashed interests pose an obstacle to long-time historical belligerents

The diplomatic, economic and military convergence between Ankara and Moscow was expedited in 2017 and is expected by some to transform into a strategic partnership in the long term. This opinion has been substantiated with concrete developments, such as joint diplomatic efforts in finding a permanent solution to the Syrian crisis and Turkey's anticipated acquisition of the S-400 missile systems, as well as with Ankara's dipped relations with its traditional ally, Washington. However, both Syria and the S-400 deals are a slippery slope, and the two countries still have many obstacles to overcome, experts said, while also mentioning clashed interest in Eurasia in the midterm future.

"The relations have a strategic aspect but indeed, there are serious obstacles hampering a strategic alliance, the foremost, Ankara's relations with NATO," Dr. Kerim Has, an academic at Moscow State University, told Daily Sabah.

Bilateral relations plummeted when a Russian jet breaching the Turkish border near Syria was shot down in November 2015, and Moscow imposed sanctions on various Turkish sectors in response. However, ties have gradually recovered since July 2016, and the two leaders met eight times in 2017. Erdoğan recently announced that the seventh High-Level Cooperation Council meeting will be held in 2018.

Dr. Has said the ties between Ankara and Moscow are progressing in line with each other and with a pragmatic perspective not based on long-term common interests. Therefore, determining a road map would avert fragile aspects and also minimizes the effects of "third party" actors on relations. "Interests are clashing on the Black Sea, South Caucasia, Crimea, the Balkans, problematic areas in the Middle East and the energy market in the eastern Mediterranean. Syria remains the only place that regional cooperation can be observed. However, the way of handling the Kurdish issue in Syria in 2018 will be one of the main tests of bilateral relations," he said.

After the last round of peace talks in Astana last week, Turkey, Russia and Iran announced that the Syrian National Dialogue Congress will be convened in Sochi on Jan. 29-30. Despite Russia assuring Turkey of PKK-affiliated groups being barred from attendance, the commander of the People's Protection Units (YPG), the PKK's Syrian offshoot, recently said Moscow promised to invite 155 representatives from the YPG-controlled region in northern Syria.

Eşref Yalınkılıçlı, a Eurasian analyst and journalist for TRT World, told Daily Sabah that in order to speak on a strategic alliance, relations should steadily progress for long years in this manner.

"Good relations serve both countries' purposes at the moment since they are tense with West. Yet, it is still a one-way relationship in terms of the economy, taking imbalance in favor of Russia in bilateral trade into account. Also, the purchase of the S-400 does not mean that military cooperation exists," he said.

Turkey finalized a deal to buy two Russian S-400 anti-aircraft missile systems and four batteries for $2.5 billion last week. Since the beginning, the deal has often been presented in Russian media as a "fracture in NATO's southern front," while political analysts express their expectations, in fact probably their desire, of Ankara's split with NATO. On the other side, the military bloc's official statements refer to Turkey's right to acquire its own defense systems, but some officials like to tread softly but carry a big stick by often recalling the "compatibility" problems of Russian systems into the Turkish army.

The Moscow State University academic said there is a difference between reaching a deal on the S-400 and completing the delivery of the system. "The next three to four years will determine Turkey's geopolitical course between NATO and Russia, and delivery will be made accordingly. At the end of these years, if Turkey keeps its commitment to NATO, complications may arise on the S-400's delivery. Moscow would not sell the systems to Turkey under these conditions, especially while Syria, Armenia and Iran, the countries included in Russia's sphere of influence, are still using the S-300," Dr. Has said.

He added that the inclusion of 33 Russian defense industrial companies in the U.S. sanctions list, including Rosoboronexport and Almaz-Antey, which are producing and exporting the S-400, may create a problem for the S-400 deal as the new list envisages implementing sanctions on third-party countries that do business with them.

Turkey has extensively negotiated with Russia to conclude the procurement of the S-400 air missiles after initial attempts with China and Italian-French consortium Eurosam failed. Ankara, on the other hand, apparently did not consider the deal enough to provide proper security, and also made a deal with Eurosam in November. The feasibility study agreement will likely produce results in 24 months. Following that, Turkey and Eurosam will decide on the potential joint production of an anti-ballistic missile system by the end of 2019, the earliest point to meet the mid-term demand. Turkey also continues to develop its indigenous missile program. In May 2017, Turkey tested its first domestically produced 280-kilometer-range "Bora" ballistic missile.

The Caucasus and Asia will also likely come to the fore as possible conflict zones in the midterm dependently on more assertive policies pursued by Turkey. Also, Turkey has been very vocal about its disapproval of Russia's annexation of Crimea from Ukraine.

Yalınkılıçlı said Ankara's relations with its firm ally in the Caucasus, Azerbaijan, is rapidly increasing, while Russia wants to maintain the status quo in the region and does not want to induce a sway in Armenia's policy toward the West. "Likewise, just as we saw in the thaw between Uzbekistan and Turkey in the post-Karimov era, Ankara is also seeking to expand its power toward its Turkic kin in Central Asia. This growing influence will inevitably restrict Moscow's effect in these geographies," he said.