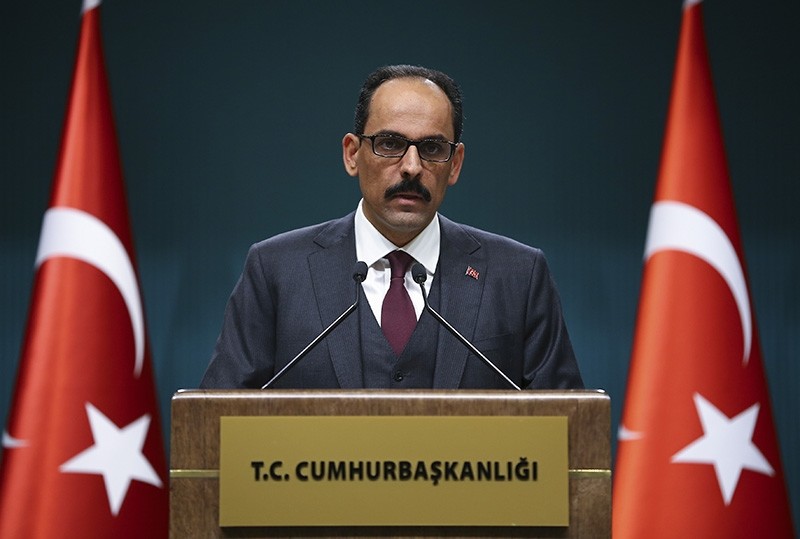 The PKK-affiliated Democratic Union Party (PYD) cannot represent the Kurds of Syria at the Syrian National Dialogue Congress to be held in Sochi, Presidential Spokesperson İbrahim Kalın said yesterday at a press conference in Ankara.

Stressing that the Turkish state is aware of what kinds of human rights violations and oppression the PYD and the YPG commit in the area, he said the West turns a blind eye to it.

"We know how the PYD and the YPG try to exert field dominance with certain kinds of human rights violations and cruelty. The Western media may not want to see it because this is a practice realized as part of the U.S.'s plan," he said.

The PKK and its Syria affiliates are considered terrorist organizations by Turkey. The PKK is also listed as a terror group by the U.S., the EU, and the U.K.; however, the U.S. has considered the YPG the most effective partner in the fight against Daesh in Syria, a relationship which has strained Washington's relations with Ankara.

Kalın added that the attendees of the conference, which will be held in Russia's Black Sea resort of Sochi, should be confirmed by all three guarantor states, which includes Turkey, Russia and Iran.

The PYD has not taken part in any round of Syrian peace talks so far and Turkey opposes their involvement. However, rumors have been spreading in international media that the group would be invited to the Syrian National Dialogue Congress in Sochi.

According to a report by Reuters in late December, Sipan Hemo, a commander of the U.S.-backed YPG, was quoted as saying that 155 representatives from YPG-held areas would be invited to the congress. Turkey, indeed, is vehemently against this.

The congress, brokered by Turkey, Russia and Iran, is supposed to bring the warring sides together to find an ultimate solution to the crisis. President Recep Tayyip Erdoğan, in this respect, said in late November 2017 that a new Syria would be born at the summit.

Kalın also touched upon the attack on an Iraqi Turkmen official in Kirkuk, urging Iraqi authorities to take immediate action.

"Turkey expects Iraqi authorities and the government to launch an immediate probe into attacks on Iraqi Turkmen in Kirkuk, and take the necessary steps to prevent them," Kalın said.

Works underway in regard to Jerusalem

Meanwhile, the presidential spokesman also commented on the current tense situation in Jerusalem. Underlining that President Erdoğan put forward a roadmap for the city after U.S. President Donald Trump declared his decision to move the U.S. embassy to Jerusalem and recognize it as the capital of Israel, Kalın said the extraordinary summit of the Organisation of Islamic Cooperation (OIC) led to successful voting at the U.N.

"Works continue to recognize Jerusalem as the capital of Palestine. A decision was taken to protect Haram al-Sharif [Temple Mount]. This will also be implemented. We are in close contact with Jordan," Kalın said.

"Our financial support is a political and moral responsibility. We will also continue to implement this plan," he added.

On Dec. 6, Trump announced his decision to recognize Jerusalem as Israel's capital and relocate the U.S. embassy from Tel Aviv to the holy city. The decision has been strongly opposed by the international community, including U.S. allies, with the exception of Israel.

The OIC convened on Dec. 13 in Istanbul in an emergency summit where it was declared that the top Islamic body recognizes east Jerusalem as the capital of Palestine, and rejected the White House's decision. Moreover on Dec. 21, the U.N. General Assembly voted 128-9 with 35 abstentions to declare President Trump's declaration "null and void."