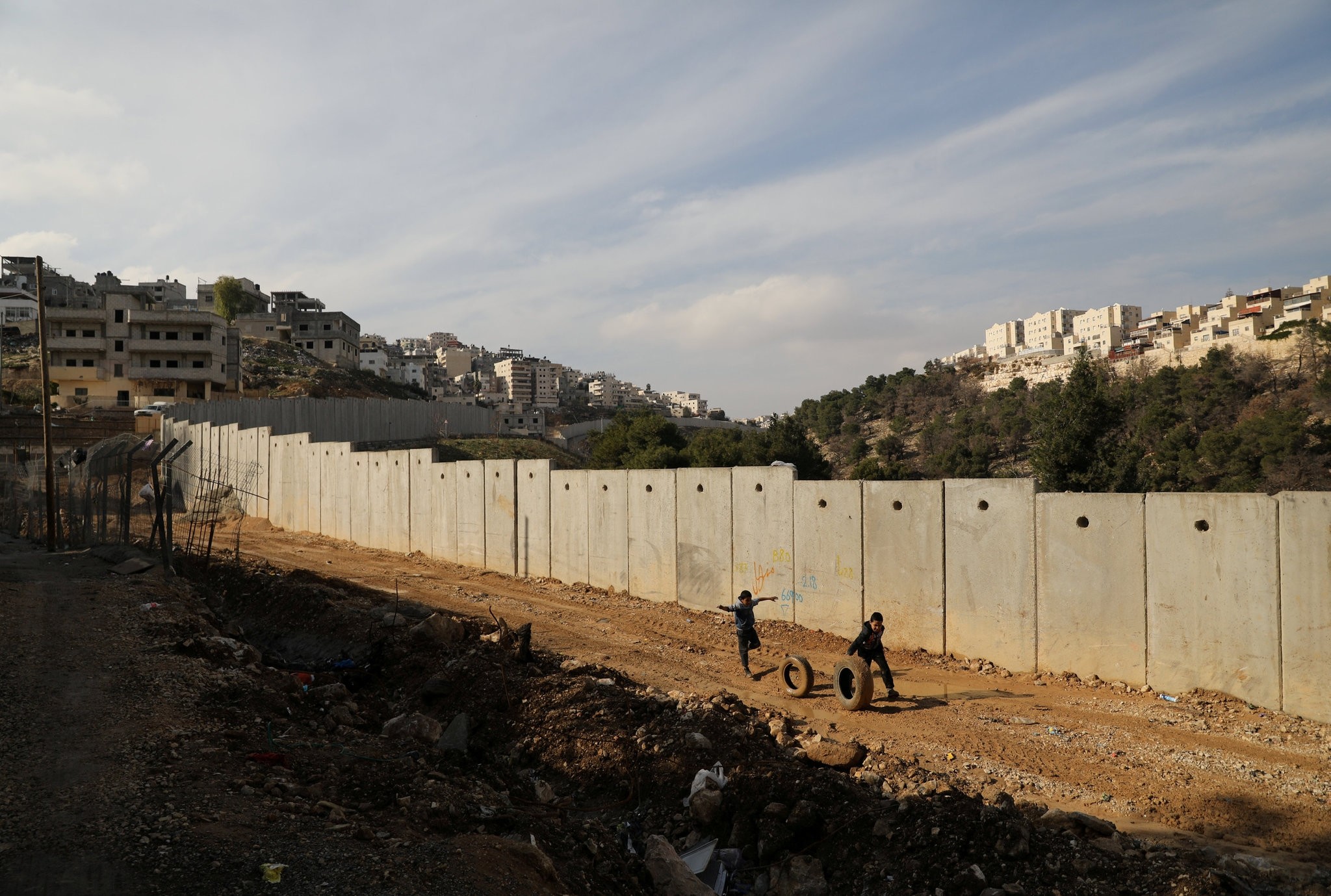 Children roll tires as they run along the Israeli barrier in the East Jerusalem refugee camp of Shuafat January 3, 2018. (REUTERS Photo)
by Daily Sabah with Agencies Jan 05, 2018 12:00 am

The Turkish foreign ministry said Friday that Israel has taken "illegitimate steps" by adopting a draft bill that requires the approval of 80 deputies at the Knesset for any changes that could be applied to the country's borders under Jerusalem's municipal jurisdiction.

The bill passed at the Israeli parliament, which is "making it possible to bring some Palestinian neighborhoods behind the separation wall under a separate municipal entity under Israeli sovereignty, is a step to undermine the foundations of the peace process and damage regional peace and stability," a statement released by the foreign ministry said.

"Knesset's decision is against the will of the international community contained in the Final Communiqué of the OIC Extraordinary Summit on 13 December 2017 and United Nations General Assembly Resolution no. 10/19 which deem it unacceptable to change the historical and legal status of Jerusalem," the statement added.

The decision at the parliament comes a month after U.S. President Donald Trump's announcement that Washington will recognize Jerusalem as the Israeli capital, instead of Tel Aviv.

The controversial move has since faced international opposition, including a statement by the Organization of Islamic Cooperation (OIC) on Dec. 13 in Istanbul rejecting the move by the White House, saying Trump's decision was "null and void." Following the OIC, the U.N. General Assembly also passed a draft resolution on Jerusalem's status, saying the sensitive status of the historic city should be protected and unilateral decisions should be avoided.

On June 26, 1967, three weeks after the Middle East war -in which Israel occupied East Jerusalem, the West Bank and the Gaza Strip- the Knesset (Israel's parliament) approved draft resolution 2064.

Under the measure, Israel annexed the Arab neighborhoods of East Jerusalem and occupied them politically and administratively.

Accordingly, Palestinian Jerusalemites were given the right of residency, which guarantees them freedom of movement, the right to elect Jerusalem's mayor and other civil privileges.

On July 30, 1980, the Knesset approved a law that considers all of Jerusalem the capital of Israel.

The legislation, which was passed on Tuesday, will enable Palestinian neighborhoods beyond Israel's "separation wall", such as Kufr Aqab and the Shuafat refugee camp, to be added to the municipal jurisdiction controlled by Israeli authorities. The move is expected to affect the Palestinians in the aforementioned neighborhoods, who hold permanent resident statuses, rather than Israeli citizenship, which may lead to the revoking of their status by the Israeli government, hence forcing them to leave.