Bilateral ties and accords between Turkey and US losing validity: Erdoğan 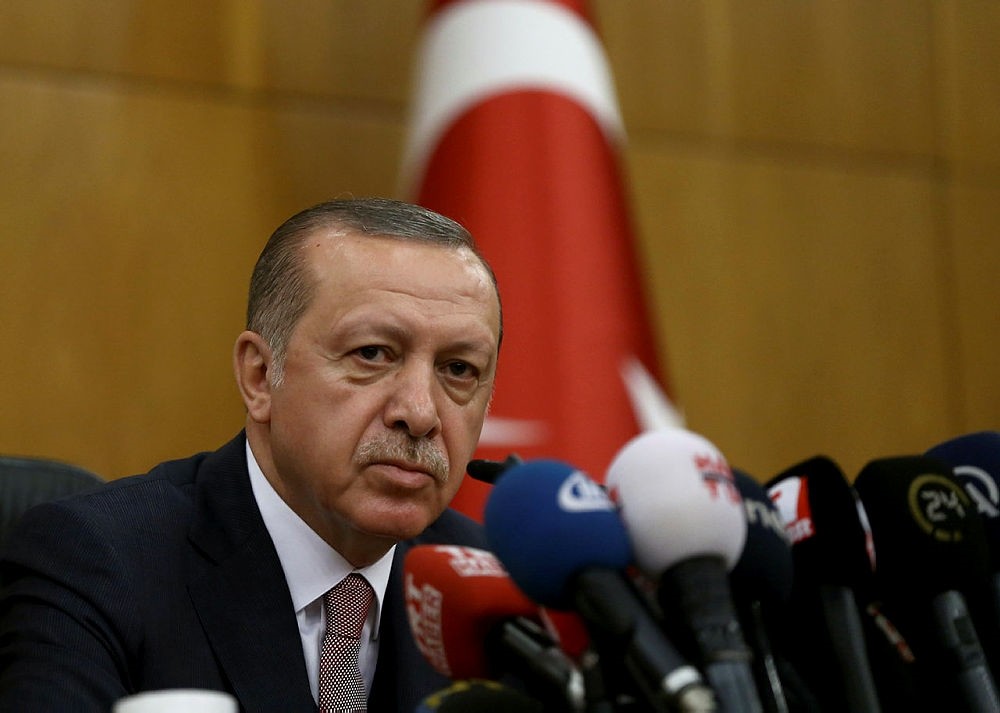 Bilateral legal accords between Turkey and the U.S. are losing validity, President Recep Tayyip Erdoğan said on Friday, as he criticized Washington for not meeting Ankara's demands for the extradition of the Gülenist Terror Group (FETÖ) leader, and not respecting the bilateral legal agreements between the two countries.

Erdoğan's remarks came after the conviction of Turkish banker Mehmet Hakan Atilla in New York, who is accused of evading U.S. sanctions on Iran. Erdoğan also said the U.S. legal system does not serve justice.

Speaking before departing for Paris, Erdoğan accused the U.S. of disrespecting the Turkish judiciary for failing to extradite Fetullah Gülen, the leader of FETÖ, which is blamed for the failed coup attempt in 2016 that killed 249 people and injured more than 2,000. He has lived in self-imposed exile since 1999 in the foothills of the Pocono Mountains in rural Pennsylvania.

Despite Ankara's determined efforts since the coup attempt, the U.S. has not taken no action against the U.S.-based terrorist leader. Under normal procedures, Gülen should have already been arrested since Turkish authorities issued an official request for his extradition on Sept. 13 under the 1979 treaty between Turkey and the U.S.

"I'm sorry, but is this how you approach this? Then what can be made of the international and bilateral deals between us? They lose validity," Erdoğan said.

Deputy Prime Minister Bekir Bozdağ had gone to the U.S.while he was justice minister several times to expedite the legal process and met with U.S. authorities, including U.S. Attorney General Jeff Sessions. However, no formal steps have been taken on the issue so far. Ankara insists that Washington's indifference on Gülen's extradition has become a political issue rather than a legal one.

"One-hundred packages [of evidence] were sent to them. So they disregard the decisions of Turkish courts. Is that your approach? Bilateral legal accords between Turkey and the United States are losing validity. And the process will continue like that after this time," Erdoğan said.

Late Wednesday, a jury in New York found Atilla guilty on five out of six charges, including violating U.S. sanctions on Iran, crimes to deceive the U.S. and defrauding U.S. banks while they acquitted him on a single count of money laundering.

Defense attorneys made a second mistrial request earlier on the same day, saying prosecutors questioned Atilla based on a report prepared by a fugitive member of FETÖ, Osman Zeki Canıtez, in an attempt to strengthen the government's case. The request was again declined by Judge Richard Berman, whose links to FETÖ have long overshadowed the trial.

The jury's disregarding of the legal contradictions in the evidence and presiding Judge Berman's proven links to FETÖ have drawn harsh criticism from Turkish authorities.

Commenting on Atilla's conviction, presidential spokesman İbraihm Kalın called it a "legal scandal," and said Ankara will continue to closely monitor the case and the appeals process. The Foreign Ministry also released a statement Thursday saying the verdict is "unjust and unfortunate," saying the trial was based on evidence that was "fake and open to political exploitation."

Evidence has revealed that Berman was hosted at a FETÖ-linked event in Istanbul. The documents confirm that Berman's trip to Turkey was paid for by the terrorist group, including all his transportation and hotel fees, after the failure of FETÖ's Dec. 17 and Dec. 25, 2013 operations, which was a so-called corruption inquiry that turned out to be a plot perpetrated to topple the government.

The hotel bills showed in detail that Berman stayed one night at the Four Seasons Hotel in Istanbul in room number 2203 on May 6, 2014, where a symposium on justice and the rule of law was organized by FETÖ-linked Yüksel Karkın Küçük (YKK) Attorney Partnership.

At the symposium, Berman targeted the Justice and Development Party (AK Party) government, claimed that Turkey is governed by "one-man rule," and suggested that the current government must be changed – ideas consistently propagated by FETÖ supporters. The judge had also criticized the dismissal of FETÖ-linked judges, prosecutors and police officers on charges of unlawful wiretapping.