Turkey, France on same page for cooperation against PKK, Daesh 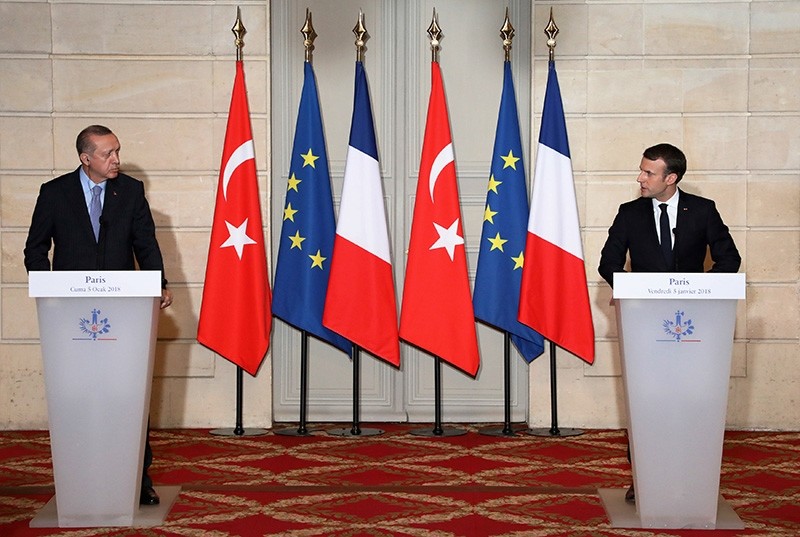 During a joint press conference on Friday after a number of bilateral agreements were signed, the Turkish and French presidents stressed the importance of counterterrorism cooperation, particularly against Daesh in Syria.

Both President Recep Tayyip Erdoğan and French President Emmanuel Macron said the two NATO allies have put forward "exemplary cooperation in counterterrorism," including on the approach to issues and developments related to Syria. On counterterrorism and refugee issues, Erdoğan said Turkey will continue to maintain its determined stance against Daesh in Syria, but added, "I call all our friends to not partner with the PKK terrorist organization's Syria affiliate PYD [Democratic Union Party] and YPG [People's Protection Units]." Macron added that his country is ready to work with Turkey to find a peaceful transition in Syria in the post-Daesh period.

Turkey will not allow establishment of a terrorist corridor by the PYD and YPG, Erdoğan said, adding that Ankara will not hesitate to do what is necessary in case of unexpected developments.

Erdoğan also criticized the U.S. support for the YPG in Syria against Daesh, saying it is "upsetting to know that the U.S. still provides truckloads of weapons" to the PKK's affiliate in Syria. The PKK is recognized as a terror organization by the U.S., EU, and U.K. Ankara also considers YPG to be a terrorist organization, but the U.S. and EU do not. Erdoğan said that Turkey will also continue its open-door policy for refugees, but European partners should support Ankara's efforts by keeping their promises on financial support for humanitarian efforts.

On Turkey's relations with the EU, Macron said that the ties between Ankara and Paris are based on "dialogue and a common approach" while keeping disagreements in mind. He said it is crucial for Turkey to remain and be part of the European Convention on Human Rights, European Court of Human Rights and the Council of Europe. He added that dialogue with Turkey is important and should be established, and any hypocritical position should be left behind.

"There will be no new chapters on EU negotiations opened," Macron added.

Erdoğan responded: "Turkey unfortunately has been waiting for 54 years. There is no country like Turkey in the EU. The EU is not able to provide us with any reason [for this wait]."

The EU's reluctance to accept Turkey's accession to the bloc has exhausted the Turkish public, Erdoğan said, adding that he is drawing attention to the issue from within EU borders, like in France.