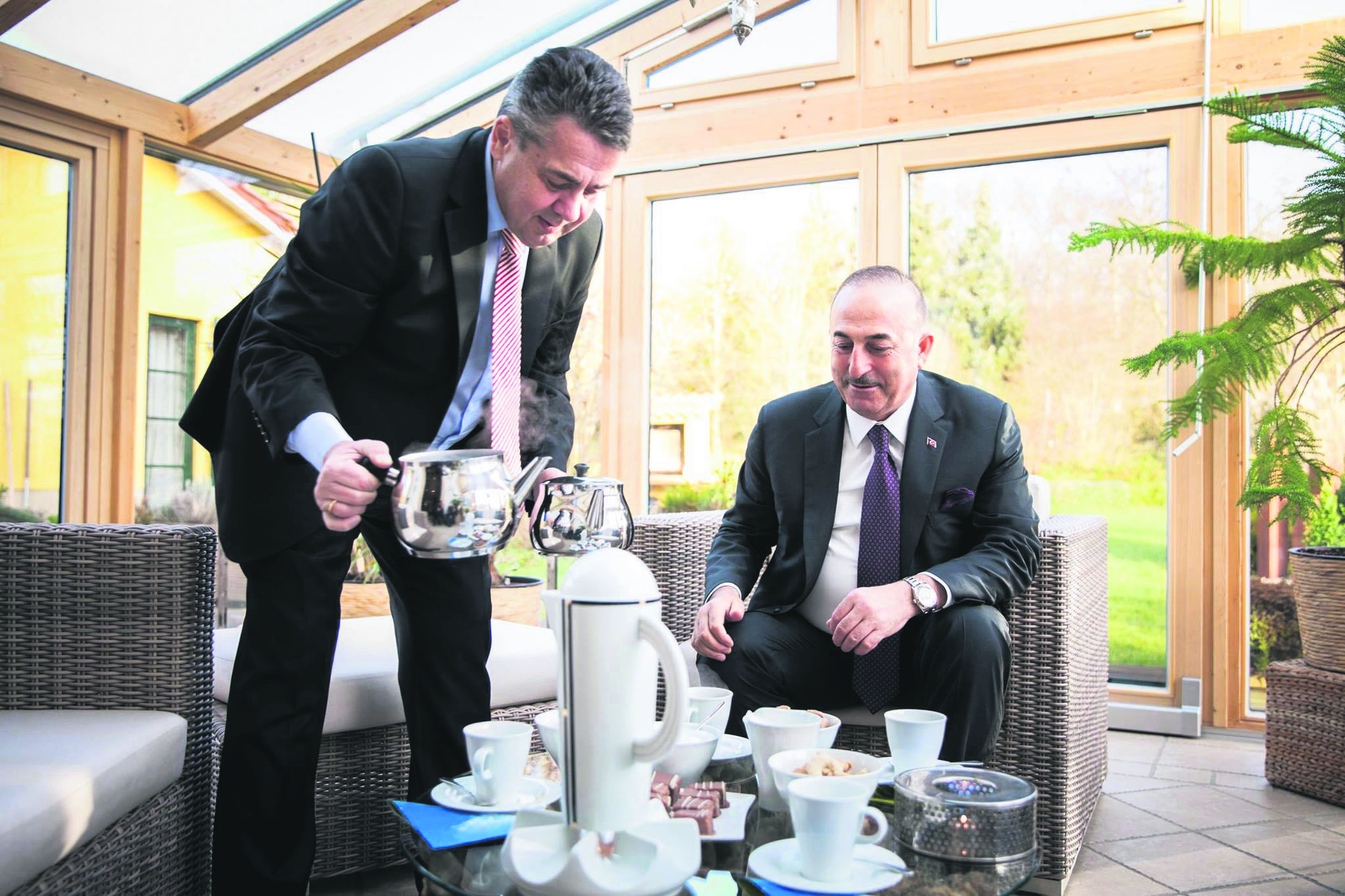 The frequently highlighted close friendship between Turkish Foreign Minister Mevlüt Çavuşoğlu and his German counterpart Sigmar Gabriel was reflected in a photograph taken Saturday in Gabriel's home in his hometown Goslar, a central German city. The photo showed Gabriel pouring tea in Çavuşoğlu's cup from a traditional teapot, used to brew tea in almost every home in Turkey. Mirroring the warm atmosphere of the photos circulated in the media, the top German and Turkish diplomats announced their agreement to keep dialogue channels open as a step to normalize the recently strained ties, while acknowledging the existence of the disagreements.

"We believe that we can develop our relations in mutual understanding, dialogue and sincere cooperation. In the future, we need to start operating various mechanisms between the two countries. There are consultation mechanisms between the two foreign ministries. We need to take steps to build confidence to improve our economic relations, we have to continue to take concrete steps," Çavuşoğlu said during a joint news conference with Gabriel at the Kaiserpfalz Imperial Palace in Goslar.

The Turkish foreign minister said they do not have to agree on all topics, however, Ankara and Berlin should continue on a positive path of normalizing relations.

"For example, we may not share the same opinion on Turkey's accession to the EU today, but we should overcome issues, such as the updating of the customs union agreement and opening the negotiations, which are not steps that need to be taken to benefit the two countries, but are also steps that need to be taken with a win-win approach," Çavuşoğlu said. He added that the two NATO allies also have a common stance on the fight against Daesh, and other regional issues in the Middle East, including the refugee crisis.

Ankara's customs union agreement with the EU came into force in 1995. Both Turkey and the EU seek to expand the scope of the agreement, which is expected to have positive effects on mutual trade relations in various industries. However, tensions with Germany have crippled the process. During the election period in Germany last year, Chancellor Angela Merkel said in an interview with young video bloggers that the EU would not enter into talks with Ankara on modernizing an existing customs union. Merkel's remarks were met with harsh reactions from Ankara.The Turkish foreign minister also underlined that the cooperation against the PKK terror group – which is listed on the terrorist organizations list by the U.S., EU, and Turkey – and also the Gülenist Terror Group (FETÖ), must be strengthened between the two countries. The presence and activities of both PKK and FETÖ followers has become a matter of dispute between Ankara and Berlin. According to German intelligence agency BfV, there are about 14,000 followers of the PKK in Germany.

"We welcome the steps taken by Germany against the PKK and the adding of Adil Öksüz [a leading FETÖ figure said be in Germany] to the wanted list," he said, while adding that more steps are expected from Berlin against the terrorist group.

Öksüz is accused of being among the masterminds of the failed July 15 coup attempt, which killed 250 people and injured more than 2,000 people. He was arrested in Turkey on the morning of July 16, but was subsequently released and has since disappeared. FETÖ is led by the Fetullah Gülen, who currently lives in Pennsylvania, U.S., since his self-imposed exile in 1999.

During the press conference, Gabriel also said he agreed with Çavuşoğlu to do everything possible to improve ties between Berlin and Ankara, which soured in a series of disputes.

"We have a serious will in this regard. Together with my colleague, we see it as a common duty to overcome this tension," the German foreign minister said.

Gabriel said it was agreed with his Turkish counterpart to advise their economy ministers to reconvene a Turkish-German economic commission.

On the PKK activities in Germany, Gabriel said that German police are taking necessary measures against the terrorist group.

"Recently, we did not allow them to show their flag in Dusseldorf," he said. "Terror is terror," he added.

On Nov. 4, Çavuşoğlu had also hosted Gabriel in his hometown, Antalya, a resort town in southern Turkey. "I met my colleague @sigmargabriel in Antalya informally to discuss bilateral relations; including the difficult issues & mutual expectations," Çavuşoğlu had then said on his official Twitter account, following their meeting during the 2017 Turkish Airlines Open golf tournament held as part of the European Tour Rolex Series.Gabriel shared his photo from Çavuşoğlu's visit on his Facebook page. Çavuşoğlu's visit to Gabriel's home was the first time the German foreign minister hosted another foreign minister at his residence in Goslar.

Ahead of the visit, Turkey's top diplomat has expressed hope for better relations with Germany in the new year ahead of a meeting with his German counterpart Sigmar Gabriel on Saturday. He also called Friday for a fresh start in the relationship with Germany, holding out the prospect of closer economic cooperation if ties improved.

The ties between Ankara and Berlin were strained following the defeated July 15 coup, as Turkish politicians criticize their German counterparts for failing to show strong solidarity with Ankara against the attempted military takeover.