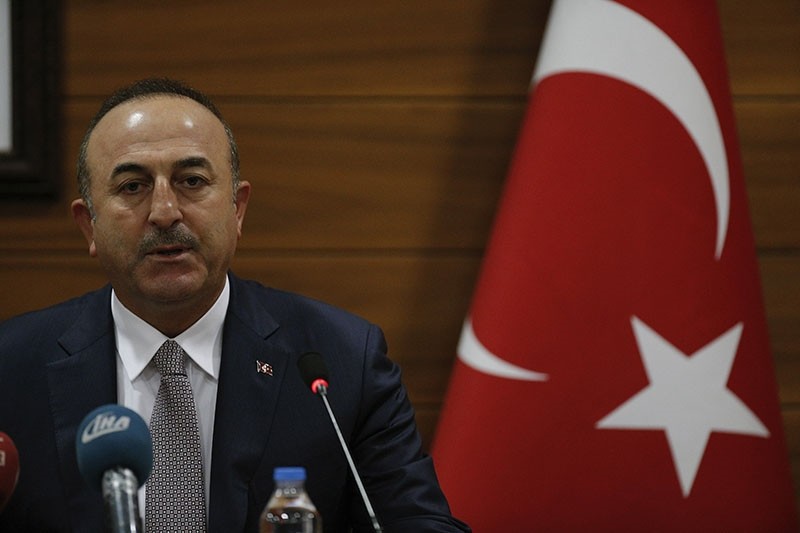 The attacks on the moderate opposition by Syria's Bashar Assad regime forces in Idlib province damages the efforts to reach a political solution, the Turkish foreign minister said Tuesday.

"With the excuse of Nusra Front, the regime is targeting the moderate opposition. This damages the process of political resolution. The parties that will convene in Sochi should not do this," Foreign Minister Mevlüt Çavuşoğlu told reporters in Ankara ahead of the Justice and Development Party's (AK Party) group meeting at the Parliament.

The Russian city of Sochi is the designated venue of the Syrian National Dialogue Congress, which is planned to be held on Jan. 29-30 with the participation of about 1,700 people. The congress is expected to be participated by all segments of Syrian society except for the terror groups, such as the PKK terror organization's Syria affiliate, the Democratic Union Party (PYD), and its armed wing the People's Protection Units (YPG), or any group related to them at a planned Sochi gathering.

Turkish President Recep Tayyip Erdoğan, Russian President Vladimir Putin, and Iranian President Hassan Rouhani had met in Sochi on Nov. 22 to discuss the progress brought about by the Astana peace talks and the changes in the de-escalation zones across Syria, during which they had also agreed to hold a Syrian National Dialogue Congress in the Russian city.

Çavuşoglu's comments came a day after Syrian forces captured 14 villages as they advanced on the largest moderate opposition-held enclave in the country's north amid a wave of airstrikes. The troops aim to reach an opposition-held air base in Idlib province and secure the road linking the capital, Damascus, with the northern city of Aleppo, Syria's largest.

A Turkish security source told Reuters Tuesday that Ankara was watching developments in northern Syria closely but added that the areas that the Syrian army had recaptured lay "mostly outside the de-escalation zones."

The U.N. has also drawn attention to the humanitarian issue due to the conflict in Idlib, saying there are thousands of civilians trapped in the conflict zone.

"Due to the ongoing reports of airstrikes and fighting, tens of thousands of civilians, already in extremely dire circumstances, have been displaced to northern Idleb [Idlib] Governorate and neighboring Hama and Aleppo governorates since Dec. 1," the U.N. Office for the Coordination of Humanitarian Affairs (OCHA) in Syria said Monday.

"Most families have likely been displaced multiple times and are in need of immediate assistance," OCHA said in a statement. "Humanitarian partners are doing their best to respond, but they are struggling to meet increasing needs."

The U.N. estimates that there are 2 million people in Idlib, while also highlighting that more than 60,000 people have fled the embattled province in recent months because of more frequent airstrikes by Syrian and Russian forces.

The Syrian Observatory for Human Rights, a London-based monitoring group, said the strikes in the northwestern province of Idlib were accompanied by shelling attacks by Syrian government forces. "The intensified airstrikes have enabled the regime forces to advance into 14 small villages in the countryside of Idlib," Observatory head Rami Abdel-Rahman said. At least 21 civilians, including eight children, were killed in aerial bombardments in the province over the past 24 hours, the monitor said.

Meanwhile, according to a report by The Associated Press (AP), due to the regime forces' attacks, thousands of civilians are being forced to flee toward the border with Turkey in freezing winter temperatures.

The Assad forces, backed by Russia, are claiming to target Hayat Tahrir al-Sham (HTS), consisting mostly of former Nusra Front fighters (a group recognized as a terrorist group by parties in Sochi talks), as Daesh is claimed to be defeated. However, the region is also home to moderate forces and thousands of civilians.

A full-blown offensive by the regime will cause large-scale destruction and a new wave of massive displacement, who would mostly be fleeing to Turkey.

According to the opposition activists, the main target for now appears to be the sprawling rebel-held air base of Abu Zuhour, on the southeastern edge of the province, and securing the Damascus-Aleppo road that cuts through Idlib.

Over the past two months, Syrian troops backed by Russian airstrikes have captured more than 80 towns and villages in the northern parts of the nearby Hama province and breached Idlib itself for the first time since mid-2015.

Another opposition activist based in Hama province, Mohammed al-Ali, told the AP that the Russians and the Syrian government are "carpet-bombing" villages before pushing into them.