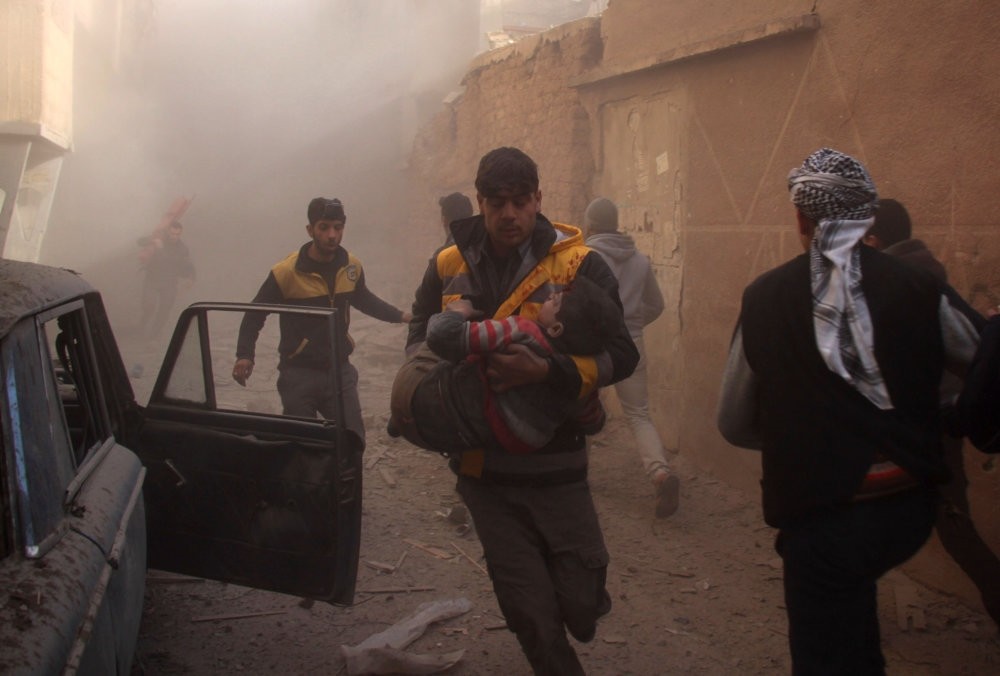 Members of the Syrian a volunteer civil defense group the White helmets, evacuate wounded people following airstrikes in the Eastern Ghouta region on the outskirts of the capital Damascus, Jan. 8.
by Daily Sabah Jan 11, 2018 12:00 am

Foreign Minister Mevlüt Çavuşoğlu called on Iran and Russia to fulfill their duties as guarantor states in Syria and stop the Assad regime's increased violations in Idlib. "Iran and Russia need to realize their duties. If you are the guarantors, stop the regime. It's not just a simple airstrike. The regime is moving in Idlib. The intent here is different," Minister Çavuşoğlu said yesterday while speaking with Anadolu Agency in a televised interview.

The foreign minister's comments came after beleaguered Syrian regime forces recently advanced on the largest moderate opposition-held enclave in the country's north amid a wave of airstrikes. Following the regime's assaults, tens of thousands of people fled the province.

Çavuşoğlu stated that they were expecting some cease-fire violations during the process; however the latest situation went beyond the limits. He added that Russia and Iran have no excuses on attacks by the regime, noting that the duty falls upon the guarantor states to maintain the de-escalation zones, which were established during the Astana, Kazakhstan peace talks.

Highlighting that the latest wave of assaults have been endangering the ongoing efforts to reach a political resolution, Çavuşoğlu said the regime is targeting the moderate opposition and civilians under the pretext of fighting terrorist groups including the Hayat Tahrir al-Sham (HTS), formerly known as the Nusra Front, located there.As part of the de-escalation zones, agreed in a tripartite consensus between Turkey, Russia, and Iran, Turkish forces are also currently in Syria's Idlib province, which is also bordering the People's Protection Units (YPG)-held Afrin region, monitoring the process in military posts.

Çavuşoğlu stressed that even though Turkey has been trying to enforce cease-fire to enable the return of the civilians in Idlib, some terrorist groups have infiltrated into the region.

"If there is a terrorist organization in a region, its location needs to be determined through field work and intelligence sources, and careful operations can be carried out against them accordingly," he said, adding that what is currently happening in Idlib is unacceptable as civilians and moderate opposition forces are being attacked.

The violations taking place in besieged areas, including Idlib, where some terrorists were able to enter, especially pose threats to civilians, Çavuşoğlu said, adding that it is not logical to completely shell besieged areas.

The recent assaults on Idlib have also prompted international rebuke as thousands of civilians were trapped in the conflict zone. The U.N. has drawn attention to the humanitarian issue.

"Due to the ongoing reports of airstrikes and fighting, tens of thousands of civilians, already in extremely dire circumstances, have been displaced to northern Idlib governorate and neighboring Hama and Aleppo governorates since Dec. 1," the U.N. Office for the Coordination of Humanitarian Affairs (OCHA) in Syria said Monday.

In relation to the issue, Turkey has summoned the ambassadors of Russia and Iran on Jan. 9 to convey its discomfort of the Assad regime's violations of the de-escalation zone borders in Idlib.

Underlining that attacks on the moderate opposition by Assad regime forces harm the efforts to reach a political solution, Turkey has demanded that the violations should end until the "Syrian National Dialogue Congress" is held on Jan. 29.

Commenting on the upcoming summit that will be held in Russia's Black Sea city of Sochi, Çavuşoğlu reiterated Turkey's line that it will not accept YPG in the meeting.

France also said yesterday that it was extremely concerned by a Syrian government offensive in the rebel-held northwestern province of Idlib and demanded that commitments made at an international deal in Astana to reduce hostilities be respected.

Nearly 3 million people are believed to be in the Idlib region, their numbers swelled by fighters and civilians who fled Syrian army advances elsewhere in the country.

"France condemns the intense bombardments carried out by the Bashar al-Assad regime's air force and its allies in the Idlib region in recent days, particularly those targeting the civilian population and several hospitals," France's Foreign Ministry said in a statement.

It also said it was outraged by the ongoing siege in Eastern Ghouta, another rebel-held area, where the U.N. human rights chief said yesterday that at least 85 civilians have been killed since Dec. 31.

Turkey has been sternly warning its allies that the terrorist groups should not play the slightest role in the future of war-torn Syria. All segments of Syrian society except for the terrorist groups are expected to attend the Syrian National Dialogue Congress with the participation of about 1,700 people.The foreign minister also noted that they plan to hold a meeting on Syria with like-minded countries in Turkey. Kremlin spokesman Dmitry Peskov said yesterday that no meeting is planned between the leaders of Turkey, Iran and Russia ahead of the Syrian National Dialogue Congress at the end of this month.

Meanwhile, as the opposition groups continue their assaults on the regime, Russia claims it has been subjected to assaults as well. The Russian Defense Ministry announced that a series of attacks on its Hemeimeem air base and a naval facility in Tartus in Syria with 13 drones have been averted.

According to a statement issued in the ministry's official newspaper Krasnaya Zvezda, it sent a letter regarding the incident to the head of Turkey's National Intelligence Organization (MİT), Hakan Fidan, and Chief of General Staff Gen. Hulusi Akar."The documents indicate the need for Ankara to fulfill its obligations to ensure compliance with the cessation of hostilities by the armed forces under its control and to intensify the work on setting up observation posts in the de-escalation zone of Idlib in order to prevent such attacks by armed [unmanned aerial vehicles] UAVs," the Russian ministry said.Following the incident, the Russian Defense Ministry stated that seven drones were shot down and six were forced to land without causing any damage. The ministry also said that the drone attacks would have required assistance from a country which has satellite navigation technology; which is considered to be directed at the U.S.

Upon the allegations, U.S. Marine Maj. Adrian Rankine-Galloway, a Pentagon spokesman, said that "any suggestion that U.S. or coalition forces played a role in an attack on a Russian base is without any basis in fact and is utterly irresponsible."