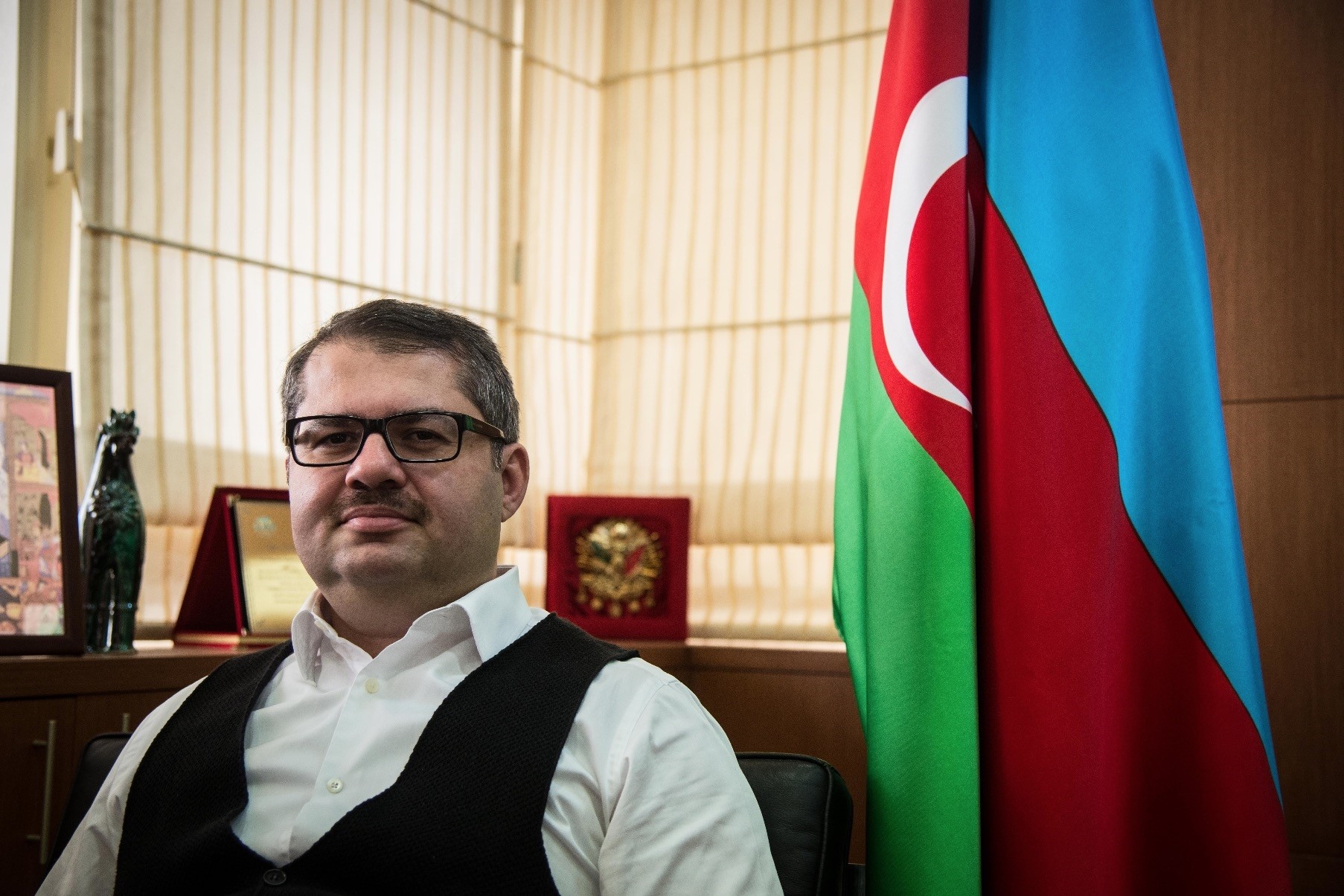 Azerbaijani Ambassador Khazar u0130brahim said he is proud of the collaboration between Ankara and Baku and believes there are no other examples of such close cooperation in the world.
by Yunus Paksoy Jan 13, 2018 12:00 am

Azerbaijan stands firmly next to Turkey on every single regional issue, and this cooperation between two brotherly countries is unique, the new Azerbaijani Ambassador to Turkey, Khazar Ibrahim, said.

Speaking to Daily Sabah for his first interview as the Azerbaijani envoy to Ankara, Ibrahim lauded the brotherly ties between the two nations. "Turkey is not only a brotherly and strategic country for Azerbaijan, but it's definitely a regional powerhouse and hopefully a future global power. Azerbaijan stands very firmly next to Turkey on regional issues," he asserted.

Recounting the recent extraordinary summit of the Organisation of Islamic Cooperation (OIC) on the Jerusalem crisis, the Azerbaijani envoy said: "President [İlham] Aliyev immediately came to Istanbul, stood next to President [Recep Tayyip] Erdoğan and delivered his speech filled with support for Turkey. We support Turkey on every issue through our foreign and security cooperation."

The Azerbaijani envoy, indeed, is proud of the collaboration between Ankara and Baku. Ibrahim believes there are no other examples of such close cooperation in the entire world.

"If you look at recent developments both in the region and globally, there are not two other nations standing next to each other on every single issue. It's absolutely unique. I can't recall any single issue Turkey and Azerbaijan even had slight differences on."

Turkish transport support on Karabakh in line with int'l law

The Azerbaijani ambassador also honored Turkey's extension of support on the Karabakh conflict, which he called "Armenian aggression against Azerbaijan."

"The Armenian aggression against Azerbaijan claiming up to 20 percent of our territories is not only an issue for us but the region. It doesn't allow full regional cooperation and undermines security. It's also a global issue. The region is so pivotal for global interests that it affects every other global issue," Ibrahim said.

Drawing attention to Ankara's role on such a crucial regional and global crisis as he puts it, the envoy said: "As far as the Turkish role here is concerned, the position of Turkey is exactly the policies being conducted today. Turkey has one clear-cut position on the issue. It says the conflict should be resolved justly based on the resolutions of the U.N. Security Council, which demanded the withdrawal of Armenian troops from Azerbaijani territories."

Ibrahim also underscored that Turkey's policy toward the Karabakh conflict is discernable on every single international platform. "The second thing is that Turkey is actively pursuing this policy everywhere, be it in the OIC or the U.N.: Everywhere. We see the active pursuit of this clear-cut position by Turkey."

In spite of having commended Turkey's brotherly ties with his country and staunch support on every single issue, the Azerbaijani envoy insisted that the support for the Karabakh crisis is thoroughly in line with international laws.

Nagorno-Karabakh is officially part of Azerbaijan. Baku and Yerevan have feuded over the Nagorno-Karabakh region since Armenian separatists seized the territory in a war that claimed some 30,000 lives in the early 1990s and ended in a frail 1994 truce. Efforts to negotiate a settlement have failed, and frequent clashes have continued.

"Personally, no. It is not satisfactory," the Azerbaijani envoy said when asked about the tourism figures and the level of cultural ties between the people of the two countries. Explaining that the number of Azerbaijani tourists visiting Turkey is much more than the other way around, Ibrahim said Turks should explore the renowned Azerbaijani music, culture and history. "We have to do more to encourage more Turks to come and enjoy these things," the envoy said.

Calling on Turkish citizens to visit Azerbaijan and learn about its culture, the envoy also had a message to Turkish and Azerbaijani airlines: "Lower the prices [laughing]. That would allow tourism to flourish even more."

Diplomatic and political ties between Ankara and Baku are good. Economic relations and the bilateral trade volume, though, have yet to live up to expectations. "During the meeting of the supreme council in Baku, both presidents highlighted the issue that a $2.5 billion trade volume is not enough given the nature of our relations," the envoy said.

Recalling his president's direct order with regard to the projected economic figures, Ibrahim said: "In fact, they already put a first figure in front of us. That's a direct order for me as ambassador from the president. The first goal is to reach at least $5 billion as soon as possible." Stressing that a $2.5 billion trade turnover does not exactly reflect superior economic cooperation between the countries, the envoy said the two countries have investments in each other's economies.

"If you look at the figures in terms of investments, you see an absolutely different picture. The Azerbaijani company SOCAR's [the State Oil Company of Azerbaijan Republic] investments alone will reach up to $20 billion this year. That's a huge number. Plus, currently up to 40,000 local Turkish employees work on SOCAR projects. That's also huge across Turkey."