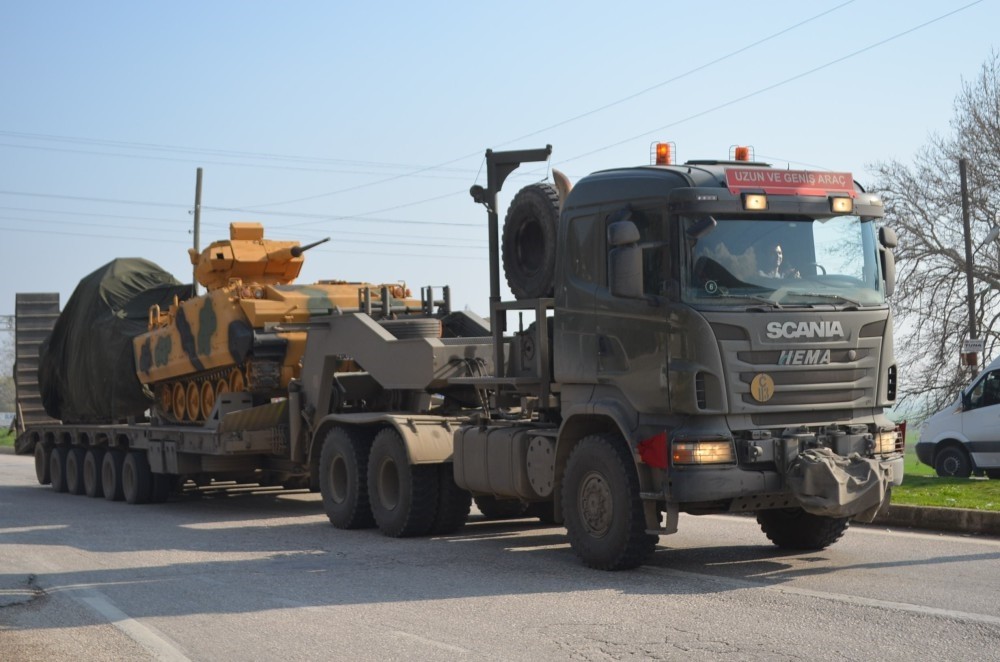 Tanks were being deployed to Hatay province near Syrian border for imminent operation to PYD-held Afrin.
by Özgenur Sevinç Jan 16, 2018 12:00 am

The U.S.'s formation of a border force made up of 30,000 PKK-affiliated group members means the legalization of terrorism and reveals Washington's real intentions in Syria, experts say, while President Erdoğan said it is Turkey's ‘duty to choke this terrorist army before it is born'

In the wake of Turkey's preparations to launch an operation in to Afrin, the latest move by the U.S. to form a border force led by the Syrian Democratic Forces (SDF), dominated by the PKK-affiliated group, is fraught with the risk of rupturing ties between the two allies, experts have argued. "The U.S.'s latest move to form a new army consisting of YPG [People's Protection Units] fighters can be seen as part of attempts to legalize the terrorist group," Bora Bayraktar, an academic from Istanbul Kültür University, told Daily Sabah. He added that these reckless steps by the U.S. despite Turkey's assiduous warnings might cause a rupture in ties between the two countries. The U.S. has announced that the international coalition against Daesh will form an army of 30,000 fighters named the Syrian Border Security Force. According to the coalition statement, about 15,000 of the fighters will be SDF veterans, and another 15,000 will be recruited and trained in the near future. Currently, 230 individuals are training in the inaugural class.

Turkey has strongly criticized the steps taken by the U.S. on the grounds that they pose threats against the national security of the country. Turkey has announced that it will act on its words and clear its borders of the terrorists as President Recep Tayyip Erdoğan said yesterday that the Turkish military completed its preparations and will soon start an operation to clear northern Syria's Afrin and Manbij of terrorists.

"Now, America confessed that it is forming a terrorist army along our borders. It is our duty to choke this terrorist army before it is born," Erdoğan said. "Trust in Turkey if we are your strategic allies. If soldiers are needed in Raqqa or Manbij, we can send one or two brigades. Act with Turkey. What you are doing is wrong; you'll disgrace yourselves in front of your strategic partner." 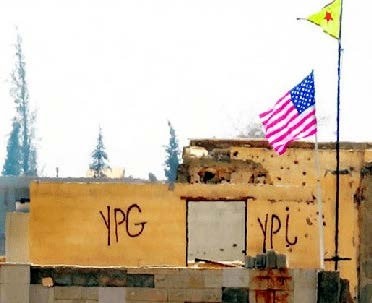 A YPG building flies an American flag in northern Syria.

Abdullah Ağar, an army veteran and security expert, said: "Turkey has long been warning the U.S. to end its cooperation with the terrorist group. Instead of allaying the concerns of Turkey, the U.S. chose to take a step to form an army of the terrorists. The recent move would further strain relations."

Ağar underlined: "The attitude of the U.S. will determine the future of ties as Turkey does not want to confront its ally in the field. However, at the same time, Turkey is decisive to fight against all terror groups targeting its national security."

Warning the U.S. that the terrorist-dominated army would betray it in the end, President Erdoğan said: "These 30,000 terrorists [armed by the U.S.] would be the first to point their weapons at American soldiers when they run into trouble. It's up to the U.S. to decide if it wants a future with these murderers, but we won't allow this or anything that puts our national security at risk." He stressed that Turkey will destroy the traps that are set up against it.

The National Security Council (MGK) will convene on Jan. 17 under the chairmanship of President Erdoğan to discuss significant issues on the table including cross-border operations.

Ağar argued that the U.S.'s decline of Turkey's call for ending cooperation with the YPG and offering its support to fight against Daesh has raised questions over the intentions of the U.S. "It is proof that fighting Daesh is just a pretext for the U.S. to arm the terrorist YPG."

Upon the news that a coalition army will be formed on the border, the Ministry of Foreign Affairs slammed the move. "The U.S.'s unacceptable plan to form a YPG-led SDF border force threatens Turkey's national security and Syria's territorial integrity," the ministry said in a statement. "We condemn the U.S.'s insistence on this erroneous step."

The main opposition Republican People's Party (CHP) also slammed the U.S.'s move, saying Washington's role in the region "is not constructive but destructive."

Speaking to journalists in Parliament yesterday, Yılmaz said the formation of a YPG-led army is the "most important issue" to happen on the Syrian border for Turkey until now, adding that the U.S. "exposed its intentions" of finding proxies to shape the region. "They want to use them against Iraq, Turkey and Syria. We disapprove of the Trump administration's foreign policies," he said.

Highlighting that the fight against Daesh is over, Mete Yarar, a security expert, said, "Forming an army consisting of terrorist is unacceptable and a clear violation of international law."

"The U.S. is playing with fire as it has been cooperating with the PKK's Syrian offshoot the PYD/YPG instead of cooperating with Turkey to fight against Daesh, providing trucks of arms to the terrorist group, and now forming a terrorist army under the cover of the Syrian Border Security Force [BSF]," Deputy Prime Minister Bekir Bozdağ wrote on his Twitter yesterday, referring to the Democratic Union Party (PYD). Bozdağ has stressed that these steps are not compatible with relations in an alliance and strategic partnership.

An operation on the YPG-held Afrin is expected to be launched by Turkey this week as the president said the preparations have been completed. On Saturday, Turkish security forces started to hit several PKK/PYD targets in the Afrin district of Syria's Aleppo province, which is controlled by the PKK-linked PYD and its armed wing, the YPG. According to information gathered by Anadolu Agency (AA) in Idlib, Turkish artillery units hit PKK/PYD forces from the Reyhanlı and Kırıkhan districts of Turkey's southern Hatay province and a Turkish Armed Forces (TSK) observation point in Idlib. The TSK fired at least 36 times during the artillery bombardment on Afrin's Bosoufane, Cindirese, Deir Bellout and Rajo districts.