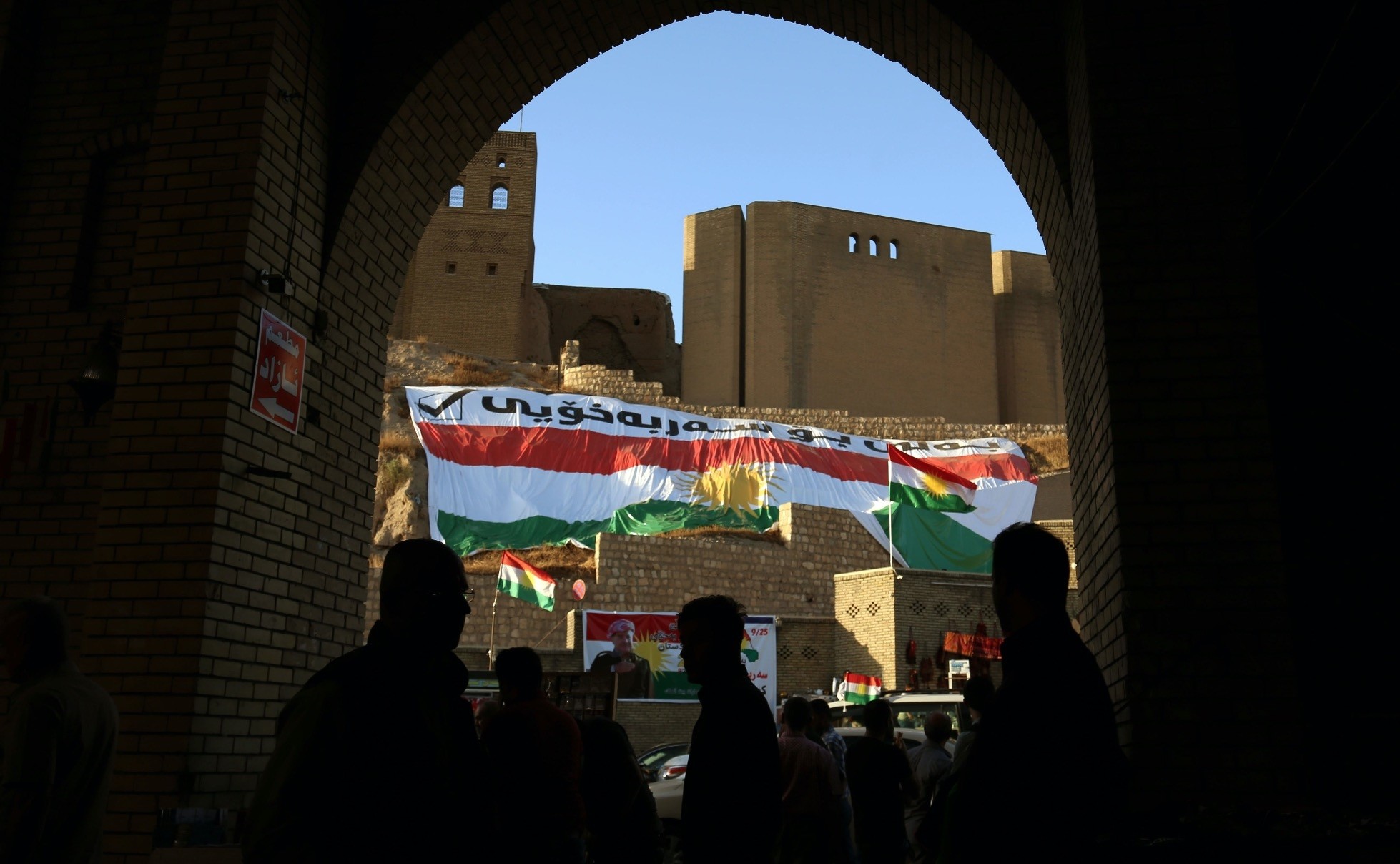 Iraqis walk in the square in the citadel in Irbil, the capital of the autonomous KRG in northern Iraq, just before the independence referendum, on Sept. 23, 2017. The voting induced an Iraqi offensive to take over contested areas.
by Daily Sabah Jan 17, 2018 12:00 am

The strained relations between Baghdad and the Kurdistan Regional Government (KRG) in northern Iraq following a controversial independence referendum in the KRG began to ease as officials from Irbil and Baghdad agreed on solving certain issues. At a meeting in Irbil, Iraqi officials agreed with the KRG on opening the Irbil and Sulaymaniyah airports to international flights, Rudaw news agency reported. The agreement comes before Foreign Minister Mevlüt Çavuşoğlu's visit, which is set to Jan. 21 and is expected to expedite mediation efforts. According to the agreement, airports in the KRG will stick to the Iraqi civil aviation acts, and assignments to airports will be made by the Iraqi Civil Aviation Authority.

No further information was provided about a starting date for flights.

The Iraqi cabinet released a statement on Monday that said the meeting was held in "an environment of trust and understanding" and that several proposals were developed for solutions to the problems between the parties. It also said that border control and security, airports, oil, customs revenues and dams were discussed during the meeting.

On Jan. 10, Çavuşoğlu cited the importance of reconciliation between Irbil and Baghdad in maintaining Iraq's stability and unity and announced that he will visit Baghdad on Jan. 21 upon requests for mediation.

Earlier this month, KRG Prime Minister Nechirvan Barzani said they also want to meet with Turkish authorities to recover relations with the country. He added that the KRG's relations with Ankara continue since both sides are open to dialogue, adding that despite the desire to meet with Turkish authorities and have good relations, no date has been scheduled yet.

Meanwhile, Masoud Barzani's Kurdish Democratic Party (KDP) announced on Monday it would not participate in Iraq's 2018 general election in disputed areas such as Kirkuk due to regional instability.

In a written statement, the KDP also appealed to the people in the area to boycott the election, which is planned to be held in May 2018.

"In order to elect the people's representatives, the polls should be held in a peaceful and stable atmosphere. However, Kirkuk and other disputed areas are under occupation now. No elections can be held in these turbulent areas. We, as KDP, have taken the decision to boycott the upcoming election," the statement said.

Tensions rose in the region when the KRG held an independence referendum on Sept. 25, and Kurds overwhelmingly voted to secede. The referendum faced sharp opposition from most regional and international actors, including Iraq's neighbors, Turkey and Iran. Baghdad imposed tough measures and launched operations to take over border gates and airports in Iraqi Kurdistan. In response to the referendum, Iraqi government forces and Iran-backed Hashd al-Shaabi militias launched an offensive on Oct. 16 and reclaimed contested areas, including the oil-rich province of Kirkuk, in a mostly bloodless advance.

The two discussed bilateral relations between Turkey and Iraq as well as current developments in the region and emphasized the importance of cooperation in the fight against terrorist groups such as the PKK and Daesh.

Baghdad was also shaken by twin suicide bombings Monday, which killed 31 people and left more than 100 wounded in Tayran Square. The bombing is the deadliest attack since Iraq declared victory over Daesh last month, and also the second such attack in three days.

On Sunday, the U.S.-led international coalition against Daesh announced that it would establish a 30,000-strong border security force with the U.S.-backed Syrian Democratic Forces (SDF), largely controlled and manned by the People's Protection Units (YPG), - the affiliate of the PKK in Syria.

Turkey has long protested the U.S. support for the Democratic Union Party (PYD) and its YPG militia while Washington has brushed off the criticism, saying it needs the group's help to fight against Daesh in Syria.

The PKK, which is listed as a terrorist organization by Turkey, the U.S. and EU, has waged a terrorist campaign against the Turkish state for more than 30 years, leading to the deaths of more than 40,000 security forces and civilians, including more than 1,200 since July 2015.