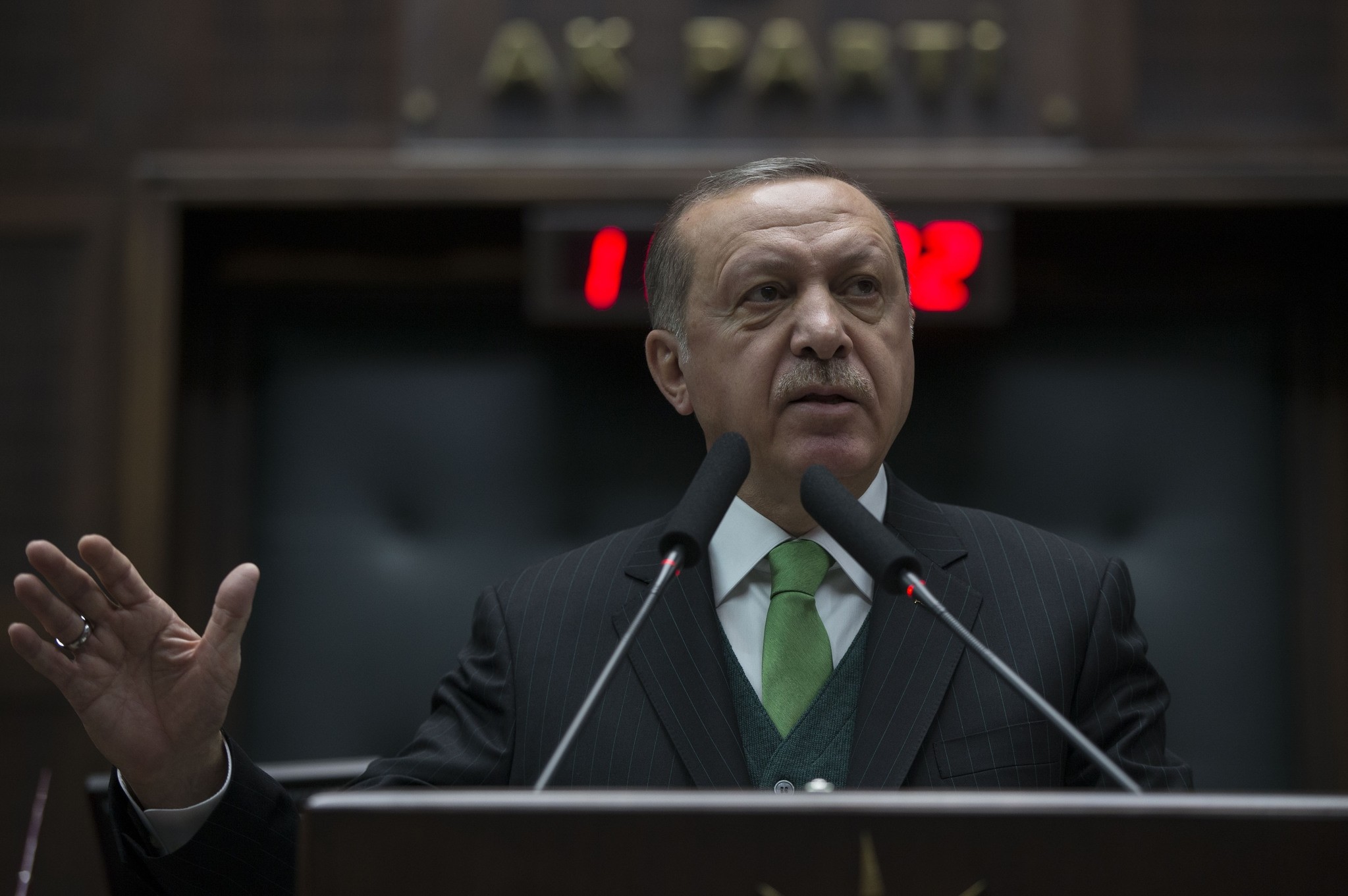 President Erdou011fan yesterday called on NATO to take a stand against the fellow ally, United States, over its plans to form a 30,000-strong SDF-led border security force in Syria.
by Mehmet Çelik Jan 17, 2018 12:00 am

NATO must do its part to protect its members against externally posed security threats, President Erdoğan said and called on the alliance to fulfill its responsibilities against the YPG threat to Turkey from northern Syria

Ankara has called on NATO to fulfill its responsibilities to member states against external terrorist threats on their borders. "You [NATO] are obliged to take a stand against those who harass the borders of one of your partners," President Recep Tayyip Erdoğan said concerning the recent controversial move by Washington to form a 30,000-strong border security force in northern Syria, which is said it will be composed of the Syrian Democratic Forces (SDF), led by the PKK terrorist organization's Syria affiliate Democratic Union Party's (PYD) armed People's Protection Units (YPG) and other local groups.

According to Article 5 of the NATO agreement, members of the alliance agree that "an armed attack against one or more of them in Europe or North America shall be considered an attack against them all." Turkey has drawn attention to this article and Article 6, as it argues that the presence of the YPG in northern Syria, along Turkey's southern border, directly threatens Turkey's national security. Occasionally, the YPG has opened harassment fire on Turkish border control positions. Such a threat, combined with the argument that the YPG has an organic link to the PKK, Ankara argues, is a legitimate base for the U.N. to put its mechanisms to work to protect Turkey's borders.

Ankara has also criticized NATO for not taking effective measures or support in Ankara's fight against terrorist groups it fights, including the PKK, Daesh and the Gülenist Terror Group (FETÖ).

Nurşin Ateşoğlu Güney, dean of the Economic, Administrative and Social Sciences Faculty at Bahceşehir Cyprus University, said that NATO "unfortunately, has so far not supported us and has left us alone," in the fight against terrorism. "As an organization, NATO currently has its own internal problems and does not have the effectiveness of acting as a unified power. In addition, it is also ambivalent to supporting the fight against terrorism." She said the alliance may continue to remain silent to threats posed to fellow member Turkey.

The U.S.-led coalition confirmed reports that it will form a 30,000-strong SDF-led border force, which has received strong condemnation from Ankara. On Sunday, the U.S.-led anti-Daesh coalition, officially known as the Combined Joint Task Force – Operation Inherent Resolve, spokesman Ryan Dillon announced plans for the establishment of a border force backed by U.S. forces.

Turkish authorities have long said the YPG establishment of a terrorist corridor in northern Syria will not be allowed and that a possible cross-border operation is nearing as the terrorist group continues to operate in the region.

Hakkı Caşın, the head of international relations department at İstinye University who had served in the Turkish Air Force at various bases, has said the Afrin issue has been a redline for Ankara and the formation of the U.S.-backed force also has legal, military and NATO aspects. "The formation of an army by supporting a terrorist group within a sovereign state is against international law," Çaşın said, adding that this will also mean the possibility of confrontation by the Turkish military on U.S. troops in Afrin.

Turkey's Chief of General Staff Gen. Hulusi Akar said yesterday, referring to the U.S.-backed project of establishing the security force, that a security force that operates under the guise of an operational partner will not be allowed.

Akar's remarks came during his attendance at a session of the 178th Military Committee in the Chiefs of Defense Session at NATO headquarters in Brussels.

"We cannot and will not allow the YPG terrorist organization, which has been proven to be an extension of the PKK, to be supported and armed under the guise of it being an operational partner."

Akar also held a meeting yesterday with U.S. Chairman of the Joint Chiefs of Staff Gen. Joseph F. Dunford, but details were not shared with the press. NATO Secretary-General Jens Stoltenberg is expected to hold a press conference today where he is expected to touch on the recent developments, as well. Whether Stoltenberg will give the U.N.'s position on Ankara's call is not yet known.

Akar's remarks came following an announcement made by the U.S.-led international coalition against Daesh on Sunday that it would establish a new 30,000-strong border security force in Syria with the SDF – the U.S.-backed group largely formed by the YPG.

"We expect [them] to reverse the mistake as soon as possible," Akar said.

İlter Turan, a professor of international relations and former rector of Istanbul Bilgi University, said Ankara's call to NATO may not trigger a sudden move by the alliance in support of Turkey but "Turkey will work to call on NATO mechanisms to take a position and communicate its concerns over establishing a YPG army in northern Syria."

"Turkey may request protection if threats persist, as it has done previously concerning NATO allies and Patriot anti-missile defense systems. A concrete step from NATO forces will need to be further negotiated and discussed between its members," Turan said.

Erdoğan addressed the Justıce and Development Party (AK Party) parliamentary group meeting where he said: "In a short span of time, we will destroy all terrorist nests, one by one, in Syria, starting from Afrin and Manbij."

The PKK is considered a terrorist organization by the U.S., the EU, and the U.K, but while Ankara considers the YPG to also be a terrorist group, Washington does not and has partnered with it against Daesh in Syria, saying it is the most effective partner in the fight on the ground.

"Those who stabbed us in the back and appear to be our allies [...] cannot prevent it, "Erdoğan also said, referring to an operation into Afrin.

Afrin operation to be conducted with Syrian opposition

The president also said the nearing operation on Afrin, a district in Aleppo near the Turkish-Syria border, which has been under control of the YPG, will be conducted by the Syrian opposition.

"This fight is made for them. We are helping our brothers there so that they can protect their own territories," Erdogan said.

The president said that Turkish officials are in talks and close communication with their Russian counterparts regarding the nearing operation on Afrin, and he also added that he did not even think about calling U.S. President Donald Trump over the recent developments.

"America will come from 11,000 to 12,000 kilometers, it will set up an army here, and it will name it what? Border protection? Whose border protection?" Erdoğan said, criticizing the U.S. move.

"The regime in Syria says this poses a threat to them and they are never inclined to such a formation."

"The U.S. cannot issue a statement on behalf of the anti-Daesh coalition. The move to create an army from YPG terrorists will only cause chaos in the region," he said.

On Saturday, Turkish security forces hit several YPG targets in Afrin to prevent a "terrorist corridor" from forming along the southern border. An Afrin operation would follow Turkey's seven-month Operation Euphrates Shield, which began on Aug. 24 in 2016 and ended in March 2017.