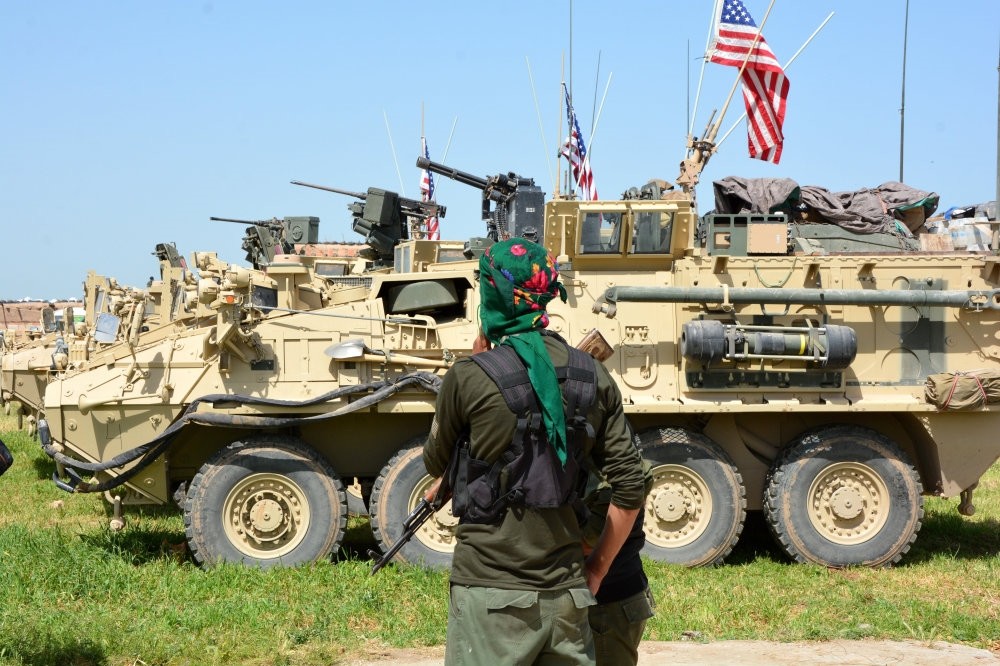 A YPG terrorist stands next to U.S. eight-wheeled armored vehicles in al-Darbasiyah, near the Syrian-Turkish border, April 29.
by Daily Sabah Jan 19, 2018 12:00 am

The U.S. backtracking on its plan to form a 30,000-strong army from PKK-affiliated groups will likely not affect Ankara's plans to clear terrorist elements from Afrin because of Washington's history of broken promises on the issue

Turkey maintains its resolution to carry out a military offensive in Syria's Afrin district amid the U.S. administration's backtrack on forming a border security force composed of Syrian Democratic Forces (SDF) soldiers, a group that is predominantly led by the PKK-affiliated People's Protection Units (YPG). U.S. Secretary of State Rex Tillerson on Wednesday said that the United States owes Turkey an explanation and does not have any intention to build a border force for the Syrian-Turkish border, saying the issue had been "misportrayed."

On Sunday, Ryan Dillon, a spokesman for the U.S.-led coalition against Daesh, announced plans to establish a 30,000-strong border security force in northern Syria with the SDF. Turkish officials scolded the move due to Ankara's national security concerns. Tillerson said he understands why Ankara reacted the way it did. "That entire situation has been misportrayed, misdescribed. Some people misspoke. We are not creating a border security force at all," he said aboard the plane taking him back to Washington from Canada where he hosted a meeting on North Korea.

In response to Tillerson's comments, Foreign Minister Mevlüt Çavuşoğlu said yesterday that all the recent statements from the United States regarding plans for a border are unsatisfactory for Ankara, adding that Turkey will intervene in Afrin and Manbij to counter the YPG and that its mistrust of Washington continues.

Since 1984, the PKK has waged a wide-ranging terrorist campaign against the Turkish state in which an estimated 40,000 people have been killed. It has been designated a terrorist organization by Turkey, the U.S. and EU. However, the U.S. regards PKK-affiliated groups as reliable partners in Syria and overlooks Ankara's objections, which has plummeted relations to a historic low.

Recounting the U.S.'s pledge that weapons provided to the YPG would be taken back, Çavuşoğlu said: "The U.S. said that that they would collect the weapons from the YPG after the Raqqa operation, but our president said that this could not be done. And today it is not being practiced. If a country like the U.S. makes a promise, they have to keep it."

Washington neglecting Ankara dates back to President Barack Obama's administration, as the former U.S. president adopted the strategy of arming the YPG. The U.S. has so far delivered more than 1,000 truckloads of weapons to the YPG, including armored vehicles, rocket launchers, anti-tank weapons, mortars, sniper rifles and night vision goggles.

Moreover, Ankara strongly disagrees with Washington for backing the YPG in the war against Daesh in Syria, and it as one of the main reasons underlying the strained ties between the two NATO allies.

While the U.S. insists that supporting the YPG is the only option for defeating Daesh, Ankara maintains that an alternative can be found with local Arab tribes backed by countries in the region instead of supporting and arming one terrorist group against another. Turkey has also said the two countries can carry out a joint operation in Raqqa before the YPG-led offensive had started, but the offer was neglected by Washington.

US officials' remarks contradict each other on Syria plans

Ambiguous and contradictory remarks from U.S. foreign policy makers have also become a matter of concern for Ankara. In November, U.S. President Donald Trump promised to halt weapons deliveries to the YPG in a phone call with President Recep Tayyip Erdoğan. However, a couple days after Trump's promise, the Pentagon sent 100 more armored vehicles to YPG-controlled areas in northern Syria, and continued its deliveries.

The Pentagon had said it plans to retrieve heavy weapons from the SDF once the Daesh terrorist group has been eliminated. However, it reneged on its promise to cease its support for the YPG and has substantially increased weapons and technology support to the group.

Prime Minister Binali Yıldırım yesterday said the U.S. should end confusion over Syria's future and change its policy there to mend relations with Turkey.

"The practices of NATO ally U.S. in Syria are unfortunately wrong and against the spirit of alliance. The U.S. should end confusion over the region's future and change its attitude toward peace and restoring relations with Turkey," Yıldırım said in a speech at a provincial security directorate meeting in the capital. He added that U.S officials had made contradictory statements on the issue over the past several days, which he called "signs of confusion."

Late Wednesday, the Pentagon released a statement, this time with U.S. Central Command (CENTCOM), claiming that the SDF-led border security force announced by CENTCOM is not a new army or conventional border guard force.

"It is also essential so that ISIS cannot reemerge in liberated and ungoverned areas. This is not a new 'army' or conventional 'border guard' force. These forces will protect the local population and help prevent ISIS from launching new attacks against the U.S. and its allies and partners, pending a longer-term political solution to the Syrian civil war in Geneva," Pentagon spokesman Eric Pahon said in a written statement sent to Anadolu Agency using one of the many acronyms for Daesh.

Çavuşoğlu previously said different opinions between the Pentagon and CENTCOM as well as different institutions and departments in the U.S. regarding support for the SDF and the PYD have been causing the problem.

Amid Ankara's final preparations to launch an offensive into Afrin, U.S.-led coalition spokesman Dillon said Tuesday that Syria's northern Afrin region is not a part of the U.S.'s area of operations against Daesh and that it does not provide support for YPG elements in the area. "We are not operating in Afrin. We are supporting our partners in defeating remaining ISIS pockets along the Middle Euphrates River Valley, specifically in areas north of Abu Kamal, on the eastern side of the Euphrates River," he said.