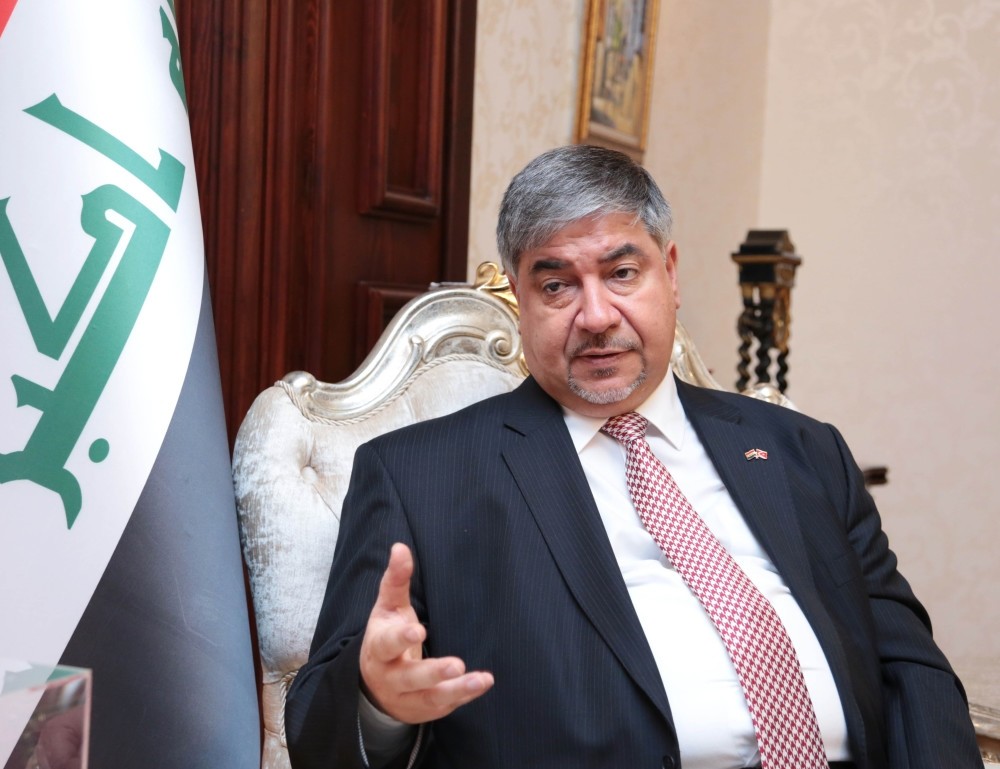 Ambassador Hisham al-Alawi said that Baghdad is willing to cooperate with Ankara to ensure the eradication of Daesh in Iraq and the region.
by Özgenur Sevinç Jan 20, 2018 12:00 am

Hisham al-Alawi, Baghdad's ambassador to Ankara, said the Iraqi government expects support from Turkey to contribute to the reconstruction efforts in provinces damaged during the fight against Daesh.

"Iraq is keen on getting as much support as possible from Turkey when it comes to the reconstruction of the provinces that have been damaged under Daesh. The government has a very comprehensive plan for reconstruction and expects contribution from countries in the region," al-Alawi said.

Alawi said that following the defeat of Daesh, countries in the region need to increase cooperation in the face of terror threats.

"We have been victorious over Daesh and liberated our cities; however they continue their presence in Syria. We want to cooperate with Turkey and other countries in the region to ensure the eradication of Daesh in Iraq and across the region," he said.

Aside from cooperating against Daesh, Ankara has also been demanding to increase collaboration with Iraq to eliminate the PKK in the region. In a recent talk between Prime Minister Binali Yıldırım and his Iraqi counterpart, the two countries agreed to enhance their cooperation in efforts against the PKK.

The Iraqi ambassador stressed: "We understand Turkish government's concerns about the PKK activities and presence in the northern part of Iraq. The government of Iraq has made it clear that we are not going to allow PKK to use Iraq territory to pose a threat to Turkey's national security. We will certainly not allow them to increase their presence in Sinjar or any other parts of Iraq. We will continue to work with Turkish government to address the concerns on this issue."

Alawi said that the Iraqi interior minister has received an invitation and he will visit Turkey soon to discuss the issue in detail with his counterparts.

He underlined that significant issues including the fight against terrorism and enhancing economic and cultural ties are expected to be discussed during Foreign Minister Mevlüt Çavuşoğlu's visit to Baghdad.

The visit is considered to be a step toward the preparations for the next round of meetings in the high level council for strategic cooperation, which was held in Baghdad last year and expected to be held in Ankara in March.

Touching on the bilateral relations between Turkey and Iraq, al-Alawi said that the two countries managed to overcome various challenges throughout the last year.

"In 2018, I believe that we will receive more optimistic developments that would help achieve our goals of strengthening bilateral relations, enhancing the regional cooperation on counter terrorism, creating political stability, resolving the existing conflicts in Syria, and promoting peaceful coexistence rather than extremism in the region," he said.

Welcoming the increase in the total volume of trade between the two sides, he stated that Iraq is seeking to enhance economic ties with Turkey and expects to increase the trade volume to $10 billion in 2018.

The Iraqi envoy stated that "this issue has been talked about for several years now, but the recent events gave it more importance and therefore the two governments have been trying to ramp up the process to agree on the details of establishing the gate."

Alawi underlined that two governments working on two pronged discussions about the issue which include ensuring the full control of federal government on the existing Habur border gate and linking the new border gate to the other areas.

In addition to economic ties, the ambassador said that the cooperation between the two sides on energy is significant as well. He said: "We are keen on building a new section of the Iraq-Turkey pipeline that has been damaged inside the Iraq border. We expect the Turkish companies to show their interest and hopefully build this new pipeline."

He said that there is also an agreement between the two sides on activating and implementing a memorandum of understanding on cooperating in the field of water.

"The two sides reached an agreement in principle to build new two dams inside Turkey near the border with Iraq and there is a proposal as well to build a third one inside Iraq's border with Turkey. Hopefully these significant issues will be addressed in high level meetings," al-Alawi said.

With the relations between Iraq and Turkey strained because of Bashiqa camp, the Iraqi ambassador said that "now it is time to resolve this issue as it had negative implications on the relations. Given this positive environment that we have, it is important to handle this issue which will help opening a new chapter in the fields of cooperation in security."

Progress being made in Baghdad-Irbil ties

It was widely discussed in Turkish media that Turkey has been considering closing the Habur border gate following the decision by the Kurdistan Regional Government's (KRG) independence referendum.

The KRG's relations with the Iraq central government were severely damaged as well after the controversial step.

In response to the referendum, Iraqi government forces launched an offensive on Oct. 16 and reclaimed contested areas, including the oil-rich province of Kirkuk, in a mostly bloodless advance.

Meanwhile, the two sides have been showing some signs of reconciliation. At a meeting in Irbil, Iraqi officials agreed with the KRG on opening the Irbil and Sulaymaniyah airports to international flights.

According to the agreement, airports in the KRG will stick to the Iraqi civil aviation acts, and assignments to airports will be made by the Iraqi Civil Aviation Authority.

Commenting on the issue, Alawi said, "Following the independence referendum, there were high level tensions between the two sides. In the past two weeks there have been a few meetings in order to address the key issues between the two sides. There are some reports saying that there is some progress. Lifting the flight ban is one of them."

The ambassador underlined that Iraqi central government has stepped up efforts to stabilize the provinces.

In relation to the situation in Kirkuk, Alawi said, "The government will decisively deal with those sleeping cells and any groups that could potentially threaten the provincial security. We have been also trying to stabilize the province and improve the basic services to the people. There is a detailed plan to reconstruct not only Kirkuk but also other provinces. We look forward to the contributions other countries could make including Turkey."

As recent news reports said that the U.S. will form a border army in Syria and Iraq led by People's Protection Units (YPG) fighters, the Iraqi envoy expressed that Turkey and Iraq as well as other countries in the region are concerned about the likely consequences.

"The decision of the U.S. is a unilateral one. We certainly do not believe that having these unilateral actions help the situation in Syria, we are keen on securing our borders," the Iraqi envoy told Daily Sabah.

In a recent statement, Pentagon spokesperson Eric Pahon said that the U.S. will provide "security and stability training" to the fighters along the border "to prevent the escape of Daesh terrorists."

The Public Affairs Office of the U.S.-led coalition previously announced that the U.S. would establish a border force consisting of 30,000 soldiers from the Syrian Democratic Forces (SDF) on the Turkish and Iraqi borders.

The U.S's decision was the latest move to add fuel to the already tense ties with Turkey. Ankara has been long warning U.S. to end its cooperation with terrorist groups on the ground stressing that these partnerships blot the U.S's own image as a NATO ally of Turkey.

While Turkish officials points to the future threats that might be posed against the country by the terrorists armed by its NATO ally, the U.S. has been brushing off Turkey's tough rhetoric claiming that its cooperation with the PKK's Syrian affiliate Democratic Union Party (PYD) and its People's Protection Units (YPG) militia is temporary.

The statements from Washington and the Pentagon have been failing to alleviate the concerns of Turkey as Turkish officials stress that the recent move would bequeath merely more conflicts in the region.

Currently, Turkey is preparing to launch cross border operations against the terrorist groups to clear its borders.

Commenting on the current situation in Syria, which is convulsed with conflicts, al-Alawi said, "Obviously Iraq and Turkey both agreed on preserving Syria's territorial integrity. We have been also supporting the ongoing negotiations in order to reach a comprehensive cease-fire, eradicate the terrorist organizations and reach a political solution to the civil war which has had many negative implications on Syrians and its neighbors."