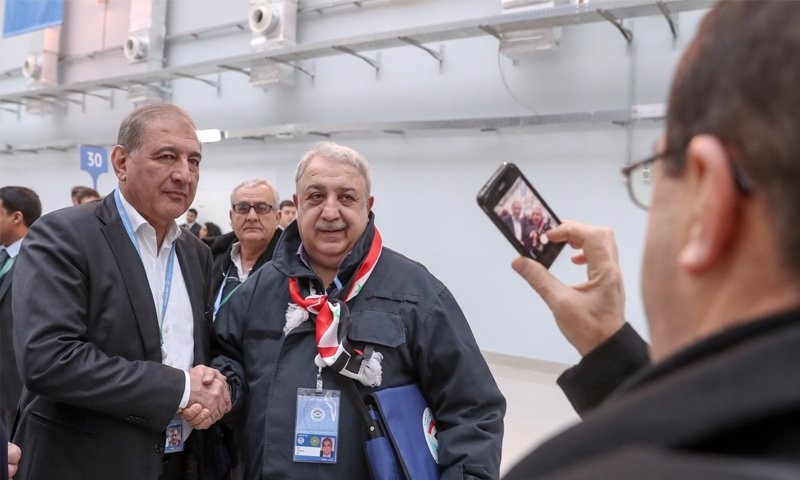 Turkey's Ministry of Foreign Affairs has demanded an explanation from Russia over the attendance of one of Turkey's most sought-after terrorists to the Syrian National Dialogue Congress in the Black Sea city of Sochi.

Mihraç Ural, a Turkish national who fought within the ranks of the Assad regime in Syria and implicated in several terror attacks in the country, was seen in Sochi on Tuesday.

Ural, known as the leader of a small Shabiha group known as the Syrian Resistance (Al Muqawamat al-Suriyah), was one of the most wanted terrorists in Turkey with Turkish officials offering a TL 1 million ($265,000) reward.

Ural was a top militant in the People's Liberation Party-Front (THKP-C), a predecessor to the Revolutionary Peoples' Liberation Party-Front (DHKP-C), which is listed as a terrorist organization by Turkey, the EU and the U.S. Ural was also the alleged mastermind of the 2013 car bombings in the Reyhanlı district of the southern province of Hatay that left 52 people dead. The attack was widely perceived as a provocation by Syrian intelligence aimed at causing a rift between Sunnis and Arab Alawites living in the region, which is known to have a diverse ethnic and religious population.

Ural joined the regime's ranks following the outbreak of the civil war in 2011 and had been fighting with the group ever since. The group was formerly known as the Popular Front for the Liberation of the Liwa of Iskandarun, referring to the former name of the current Hatay province that joined Turkey by referendum in 1939, when Syria was ruled by the French mandate. The province was long referred to as a part of Syria by the Baathist regime in official documents and maps and remained a tense issue between the two countries until the early 2000's, which marked the Turkish-Syrian rapprochement.

Ural and his fellow militants, cited as one of the deadliest Shabiha groups in Syria, were also accused of committing massacres on Sunni civilians in the coastal towns of Baniyas and Baida, in which hundreds were killed.

When two DHKP-C terrorists killed prosecutor Mehmet Selim Kiraz in his office at Istanbul's Çağlayan Courthouse on March 31, 2015, Ural glorified the deadly event, saying: "If you contaminate justice, then you'll bear the consequences."

The DHKP-C is an offshoot of a Marxist-Leninist movement that was established in the 1970s. The organization was founded in the 1990s after it splintered from a larger group of far-left organizations responsible for a string of attacks. It kept a relatively low profile for many years, but in 2013 a DHKP-C militant carried out a suicide bombing at the U.S. Embassy compound in Ankara, killing a Turkish security guard.

Ural's name grew when reports claimed that the regime was harboring militants linked to the organization. According to reports published by Turkish media outlets in March 2013, the DHKP-C had moved its center from Greece to Latakia, following operations conducted by the Greek government after a deal was made between the then-prime minister and current president, Recep Tayyip Erdoğan, and then-Greek President Antonis Samaras to strengthen cooperation in the fight against terrorism.

Latakia is also known as one of the strongholds of the Syrian regime. The city's district of Ras al-Bassit has a DHKP-C militant camp protected by the Syrian army. While the military base was also assigned to a group called the Urgent Ones (Acilciler) led by Ural, DHKP-C militants in the camp were being trained in explosives and bomb making by military officers from the Syrian army.