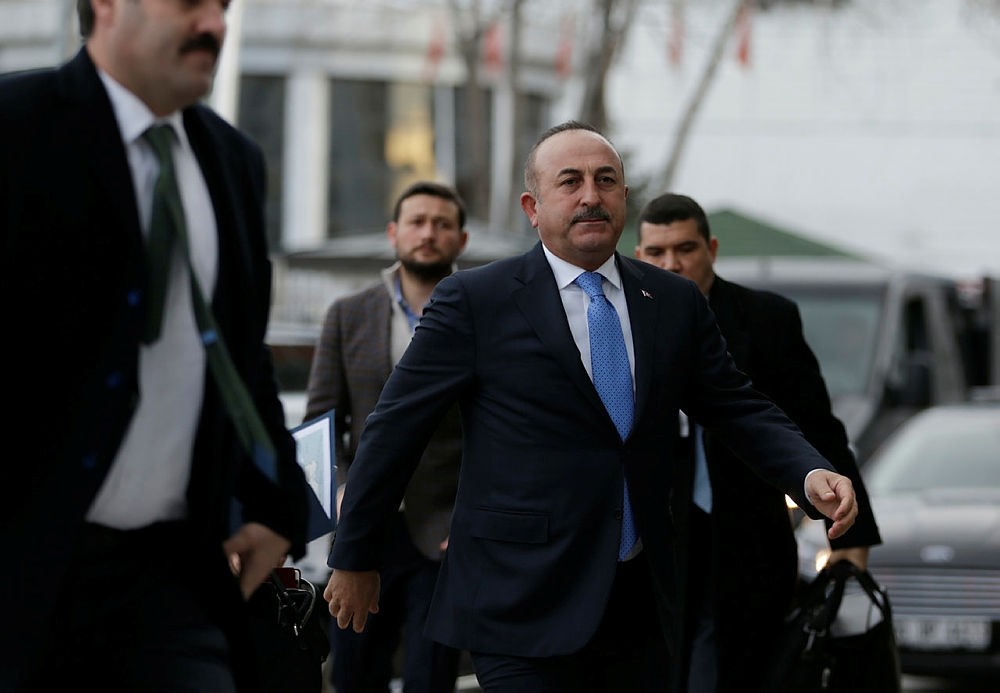 Turkish Foreign Minister Mevlüt Çavuşoğlu expressed satisfaction on Thursday on the Syrian National Dialogue Congress in Sochi and called on the Assad regime to start negotiating on matters regarding the future of Syria.

Speaking to reporters in Ankara, Çavuşoğlu said "The process was integrated into the Geneva process, which needs to be renewed and the regime need to start negotiating on the constitution, elections and a provisional government."

President Recep Erdoğan and his Russian counterpart Vladimir Putin also said Wednesday that they were generally satisfied with the results of the Sochi summit.

The two leaders talked over the phone where they discussed the outcome in Sochi and developments regarding Operation Olive Branch in Afrin. Both leaders noted that the outcome at the Sochi summit was an "important achievement" despite its problems.

The summit, backed by Turkey, Russia, and Iran, was held in the Russian Black Sea city of Sochi on Jan. 29-30. It was an attempt to bring all warring parties in the Syrian conflict, excluding the terrorist groups, to the table to facilitate the U.N.-sponsored peace talks in Geneva.

A proposal to form a constitutional committee was agreed upon on Monday and by the representatives from the Syrian regime and the guarantor countries of Russia, Iran and Turkey.

Parties at the two-day summit also said in a final statement that they want to bring an end to the ongoing conflict as soon as possible, and urged international help to that end.

Erdoğan and Putin also hailed the decision at Sochi to form a constitutional committee as its "most important outcome," asserting that the progress made at the meeting enhances both the Astana and Geneva peace talks and U.N. Security Council resolutions.

Prime Minister Binali Yıldırım said the Sochi summit will be followed by meetings in Geneva with the participation of all ethnicities and groups not involved in terrorism.

"We are acting together with other countries to resolve problems," he said Wednesday at a press briefing held after a meeting with the Lebanese Prime Minister Saad Hariri.

Turkey had repeatedly insisted that while all sections of the Syrian society should be included in the congress, no terrorists or terrorist groups should be allowed to join the talks.

Commenting on the participation of Mihraç Ural, the leader of a small Shabiha group known as the Syrian Resistance, in the summit, who is being sought with an international red notice, Çavuşoğlu said Turkey has asked an explanation from Russia, and requested him to be detained and extradited to Turkey.

Ural, one of the most-wanted terrorists in Turkey with Turkish officials offering a TL 1 million ($265,000) reward for him, is blamed for a spate of attacks in May 2013 in the town of Reyhanlı in Turkey's southern Hatay province that left 52 people dead.

The attack was widely perceived as a provocation by Syrian intelligence to cause a rift between Arab Sunnis and Alawites in the region, which has a diverse ethnic and religious population.

Ural joined the regime's ranks following the outbreak of the civil war in 2011, and had been fighting ever since. The group was formerly known as the Popular Front for the Liberation of the Sanjak of Iskandarun, referring to the former name of Hatay province, which became a part of Turkey in a referendum in 1939, when Syria was ruled by the French Mandate. The Baathist regime long referred to the province as a part of Syria in official documents and maps and remained a tense issue between the two countries until the early 2000s, which marked Turkish-Syrian rapprochement.

Ural and his fellow militants, cited as one of the deadliest Shabiha groups in Syria, were also accused of committing massacres of Sunni civilians in the coastal towns of Baniyas and Baida, in which hundreds were killed. When two DHKP-C terrorists killed Prosecutor Mehmet Selim Kiraz in his office at Istanbul's Çağlayan Courthouse on March 31, 2015, Ural glorified the event, saying: "If you contaminate justice, then you'll bear the consequences."

The DHKP-C is an offshoot of a Marxist-Leninist movement that was established in the 1970s. The organization was founded in the 1990s after it splintered from a larger group of far-left organizations responsible for a string of attacks. It kept a relatively low profile for many years, but in 2013, a DHKP-C militant carried out a suicide bombing at the U.S. Embassy compound in Ankara, killing a Turkish security guard.

Turkey had repeatedly insisted that while all sectors of Syrian society should be included in the congress, no terrorists or terrorist groups should be allowed.