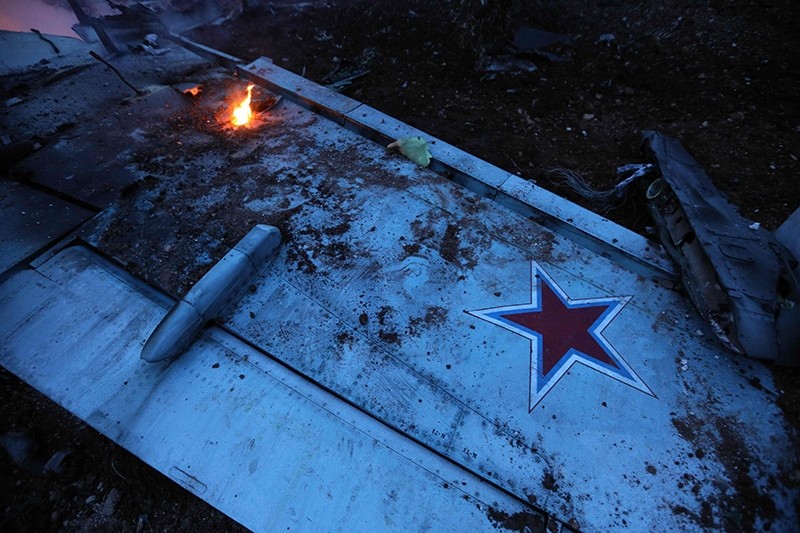 The Russian military said Tuesday that it asked Turkey to help recover the debris of the Russian fighter jet that was shot down over embattled northwestern Syrian province of Idlib over the weekend.

Al-Qaida-linked militants on Saturday said they downed the Russian Su-25 in Idlib. Russian officials said the pilot engaged in a gunbattle with militants before blowing himself up with a hand grenade.

"The Russian military sent a request to the Turkish side to assist in obtaining all the wreckage of the Russian Su-25 fighter jet shot down by terrorists Feb. 3 with a MANPADS in the airspace over the Syrian province of Idlib," the Russian Defense Ministry said in a statement.

The ministry added that it asked Turkey to help recover the debris in order to establish the type of weapons used to shoot down the jet.

Moscow also said Turkey helped to return the body of the pilot back to Russia.

The plane was downed by a portable air defense missile, the first time a Russian jet was shot down over Syria since Russia launched its air campaign there in September 2015.

In recent weeks, Assad regime forces backed by Russian air power have intensified attacks on Idlib, despite it being designated a so-called de-escalation zone by an international agreement between Turkey, Russia and Iran.

Russia is a major ally of the Assad regime whose forces have made territorial gains against moderate opposition in recent months.

The U.N. says more than 270,000 have been displaced in Idlib because of the regime onslaught since Dec. 15.