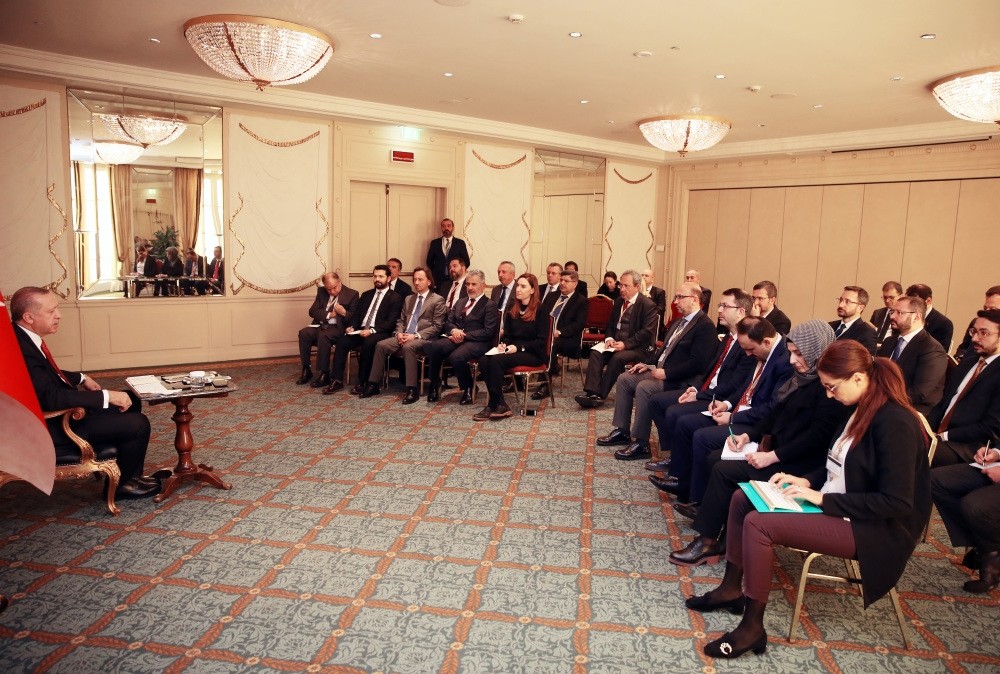 President Erdou011fan told reporters during a press conference in Rome that he and Pope Francis agreed during the meeting to continue communication and efforts on Jerusalem.
by Serdar Karagöz Feb 07, 2018 12:00 am

The controversial move by the White House to recognize Jerusalem, a holy city to Christians, Jews and Muslims, as Israel's capital was a wrong step, Pope Francis reiterated during talks at the Vatican, President Erdoğan said

ConcernIng his meeting with Pope Francis at the Vatican on Feb 4-5, President Recep Tayyip Erdoğan told reporters in Rome that the decision by the United States to recognize Israel's capital as Jerusalem as opposed to Tel Aviv is a wrong step and the historic city's status quo should be preserved as per the United Nations resolution.

"I observed that Pope Francis was as determined as he was the first day on this issue. Jerusalem is a holy city for Muslims, Christians and Jews. The pope believes its status should be preserved. He agrees that the U.S. step was wrong, as well," the president said, referring to their meeting, which was the first time a Turkish president has visited the Vatican in 59 years and the second time ever.

Pope Francis was among the first leaders who opposed U.S. President Donald Trump when he decided to recognize Jerusalem as Israel's capital instead of Tel Aviv, an issue that drew strong criticism from the international community. 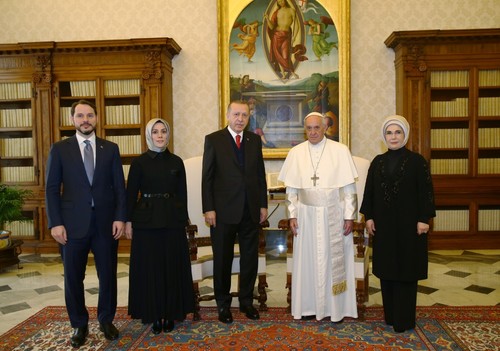 The move was condemned and rejected by the Organisation of Islamic Cooperation (OIC) in the same month. The nonbinding resolution declaring the U.S. action on Jerusalem "null and void" was approved 128-9 in a victory for Palestinians at the U.N. General Assembly. Amid Washington's threats, 35 of the 193 U.N.-member states abstained and 21 were absent. "I told him [Pope Francis], you are the spiritual leader of the 1.2 billion Catholics in the world and I am the term president of the Organisation of Islamic Cooperation that represents a population of 1.7 billion. We need to work together to preserve Jerusalem's status. The messages you will convey to the Catholic world on this are important," the president said, also highlighting that both leaders agreed to continue joint efforts. Erdoğan added that Trump's decision, which was "registered as wrong at the U.N. General Assembly" only received support from the U.S., Israel, as well as a few small countries.

The Vatican also supports a two-state solution to the Palestinian-Israeli conflict, with both sides agreeing on the status of Jerusalem – home to sites holy to Judaism, Christianity and Islam – as part of the peace process. Palestinians see east Jerusalem as the capital of a future independent state, but Israel says the whole city is its "united and eternal" capital. Erdoğan said that awareness of the issue of Jerusalem should be kept high in the international arena through cooperation with the 128 countries that stood against Trump's decision at the U.N. General Assembly.

YPG a proxy ready to be used by anyone

Erdoğan commented on the partnership between the U.S. military and the PKK terrorist organization's Syrian affiliate Democratic Union Party's (PYD) People's Protection Units (YPG) militia, saying it is a proxy that can be used by anyone.

"The YPG is like a skeleton key, it can be used by anyone. Turkey does not need a skeleton key or any tool like the YPG, a terrorist group. In an atmosphere in which the U.S. is focused on using one terrorist group against another, we need to focus on what we can do on our own," Erdoğan said, referring to the U.S.-YPG partnership against the Daesh terrorist organization in Syria. He also added that he "does not want to think of the possibility of such a partnership" between the YPG and Russia or Iran.

Erdoğan said the U.S. government's promise to remove YPG terrorists from Manbij, Syria has not been fulfilled, referring to the group's presence in the predominantly Arab province, adding that Trump has also failed to keep promises made on the matter.

Concerning the disagreements between the two NATO allies, he said: "Manbij is not a new issue. This is a process that began during [U.S. President Barack] Obama's term. We told the U.S. our view on the issue from the beginning. Unfortunately, Obama lied to us on this. Unfortunately, right now, the Trump administration is moving in the same direction."

Erdoğan said the Trump administration had told Turkey that the YPG would be moved to the east of the Euphrates River, accepting that real Manbij locals are Arab, "but that promise is yet to be fulfilled." The president also said that the people of Manbij are preparing resistance and that "Turkey will do what is necessary to return Manbij back to its true owners."

"There are refugees from Manbij among those in Turkey. We want to go back to our homes, they say. People from Afrin want to return to Afrin, those from Idlib want to return to Idlib. If the U.S. and coalition forces are genuine, then they should reveal their true intentions. They should say that there are 3.5 million refugees in Syria. We should do what is necessary to enable them to return to their countries," Erdoğan said, adding that such concerns were also communicated to Pope Francis and the Italian prime minister.

Some mistakes corrected at Sochi

Commenting on the diplomatic efforts to establish peace in Syria, the president said the Geneva talks have not been successful. "The Astana talks have been more fruitful in achieving concrete results. We consider Astana as complementary to Geneva. In terms of Sochi, there were some issues. [Foreign Minister] Mevlüt [Çavuşoğlu] put forward efforts to correct them and, as a result, some mistakes were corrected," he said. The president added, however, that "there were still some mistakes in Sochi," referring to the appearance of Mihraç Ural during the latest Sochi talks in late January.

Ural is a Turkish national who fought in the ranks of the Bashar Assad regime in Syria and was implicated in several terrorist attacks across Turkey. Known as the leader of a small Shabbiha group known as the Syrian Resistance, Ural was one of the most-wanted terrorists in Turkey, with Turkish officials offering a TL 1-million ($265,000) bounty for him.

The summit, backed by Turkey, Russia and Iran, was held in the Russian Black Sea city of Sochi on Jan. 29-30. It was an attempt to bring all warring parties in the Syrian conflict, excluding the terrorist groups, to the table in order to facilitate the U.N.-sponsored peace talks in Geneva.

A proposal to form a constitutional committee was agreed upon on Monday by representatives from the Syrian regime and the guarantor countries of Russia, Iran and Turkey.