How can US be Turkey’s ally if it calls YPG ‘heroes,’ opposition MHP leader asks 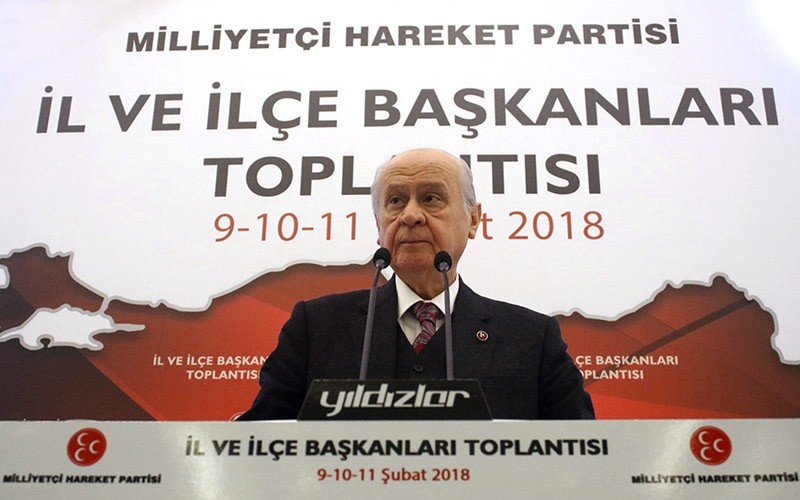 The United States will be remembered as one of Turkey's enemies if its support to the PKK's Syrian affiliate YPG does not cease, opposition Nationalist Movement Party (MHP) leader Devlet Bahçeli said Sunday, asking how the superpower could be an ally of Turkey if it calls YPG "heroes."

Slamming U.S. commander Paul E. Funk's remarks about YPG militants being "heroes" for defeating Daesh terrorist group in Raqqa, he said that the commander has failed to see "who made the real mistake."

"How can the U.S. be an ally if they call the traitors 'heroes'? The fact that U.S. special forces are patrolling in Manbij is treason against Turkey by its own ally," he said.

Manbij is a critical swathe of land west of the Euphrates river. Turkey has called upon the YPG countless times to leave the area, and despite the U.S. promise, the terrorists are yet to leave the city.

"The U.S. has at least encouraged terror attacks against Turkey, if not fully endorsed them," he added.

"Our strategic partner, our NATO ally, has upped its cooperation with other terrorist groups after the July 15 coup attempt by FETÖ failed," he concluded, using an acronym for Gülenist Terror Group.

As the YPG has gained control of swathes of territory under the pretext of the fight against Daesh and moved to form a terror corridor along Turkey's border, Ankara launched Operation Olive Branch on Afrin on Jan. 20 to clear out the terrorists and "hand over the region to its rightful owners." The operation in Afrin – bordering Turkey's Hatay and Kilis provinces – was widely expected in the wake of Turkey's Operation Euphrates Shield in northern Syria, which cleared Turkey's border of Daesh terrorists between Aug. 24, 2016, and March 2017. In a statement, the Turkish General Staff has stressed that the operation aims to establish security and stability along Turkish borders and in the region as well as to protect Syrian people from the oppression and cruelty of terrorists.

Commenting on the ongoing operation, Bahçeli underlined that it will resolutely continue until all PYD/YPG terrorists are eliminated and said, "The operation is the reflection of Turkey's legitimate rights on the ground." Bahçeli also conveyed his condolences to the families of Turkish soldiers who were killed on Saturday. Bahçeli said, "Turkey will eventually prevail in its fight against terrorism."

In relation to the great challenges Turkey faces, Bahçeli stated that the MHP is well aware of the threats directed toward Turkey and therefore is acting with a sense of responsibility. Referring to the alliance between the MHP and the ruling Justice and Development Party (AK Party), Bahçeli highlighted that the aim of the national agreement is to enhance unity in the face of growing challenges surrounding the country.