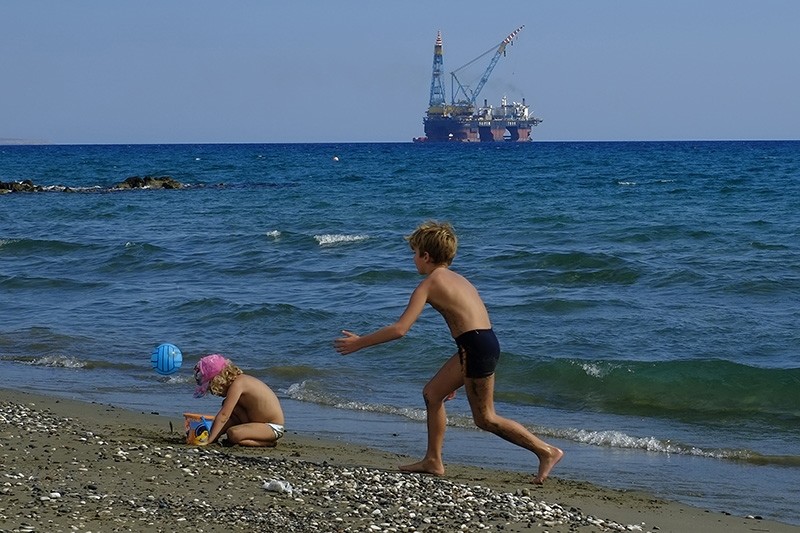 In this photo taken on Sunday, Oct. 15, 2017 children play on a beach with a drilling platform seen in the background, on the outskirts of Larnaca port, in the eastern Mediterranean island of Cyprus. (AP Photo)
by Compiled from Wire Services Feb 11, 2018 12:00 am

Turkey's foreign ministry criticized the Greek Cypriot Administration again Sunday for a "unilateral" offshore hydrocarbons search after Turkish warships prevented an Italian rig from reaching an area off the east Mediterranean island nation where it was to start exploratory drilling for gas.

Turkish warships on Friday stopped the Saipem 12000 rig belonging to the Italian energy firm ENI as it headed toward an area southeast of Cyprus.

Turkey, in a statement Sunday, said Greek Cypriots were disregarding the "inalienable rights on natural resources" of Turkish Cypriots and jeopardizing the region's stability.

"Within this context, we have most recently observed that there is an intention to commence activities in block number three in the Greek Cypriot Administration's so-called exclusive economic zone."

Turkey shares the justified concerns of the Turkish Cypriot people on this issue and supports the statement made on Saturday by the Ministry of Foreign Affairs of the Turkish Republic of Northern Cyprus, it said.

"As we have repeatedly emphasized in the past, not only will we continue to protect our own rights and interests in our continental shelf, but we are also determined to take the necessary steps together with the Turkish Republic of Northern Cyprus within the framework of our support to the Turkish Cypriot side."

The ministry said the sole responsibility for any situation that could arise as a consequence falls on the Greek Cypriot side, which, instead of expending efforts towards a just and lasting comprehensive settlement in Cyprus, persists in acting as though it were the sole owner of the island and in continuing its unilateral hydrocarbon-related activities.

"This attitude of the Greek Cypriot side, which does not shy away from irresponsibly jeopardizing the security and stability of the Eastern Mediterranean region, is actually the fundamental reason behind the failure of the Cyprus settlement negotiations to produce an outcome for the past half-century," the ministry said.

The ministry recalled that during the Conference on Cyprus convened last year, the Greek Cypriots demonstrated once again their unwillingness to accept a partnership with the Turkish Cypriots on the basis of political equality, and that because of this, the conference closed without a settlement.

According to the statement, as long as the Greek Cypriot Administration continues its unilateral hydrocarbon-related activities, it will remain evident just how far removed the Greek Cypriot side is from perceiving the Turkish Cypriots as their equal partners.

"We also make use of this opportunity to strongly emphasize our expectation that companies centered in third countries refrain from supporting, through cooperation with the Greek Cypriot Administration in the area of hydrocarbons, this unconstructive Greek Cypriot attitude which also constitutes a major obstacle to the settlement of the Cyprus issue," the statement added.

Cyprus has been divided since 1974 when a Greek Cypriot coup was followed by violence against the island's Turks, and Ankara's intervention as a guarantor power. It has seen an on-and-off peace process in recent years, including the latest initiative in Switzerland under the auspices of guarantor countries Turkey, Greece and the U.K. collapsing in 2017.

Only Turkey recognizes the Turkish Republic of Northern Cyprus (TRNC), whereas Greek Cypriot Administration has international recognition as the Republic of Cyprus.

An ENI spokesman told The Associated Press that the Turkish warships told the rig not to continue because there would be military activities at its destination. The spokesman said the rig would remain where it stopped until the situation is resolved.

Greek Cypriot President Nicos Anastasiades said Sunday that Cypriot authorities are taking actions that will neither lead to an escalation of tensions nor overlook the fact that Turkey was violating international law.

The Greek Cypriot government says a gas search is its sovereign right and that any potential hydrocarbon wealth generated will be equitably shared among all Cypriots after the island is reunified.

Italy's ENI, France's TOTAL and ExxonMobil of the U.S. are among the companies licensed to search for hydrocarbons off Cyprus' southern coast.

Last week, Greek Cyprus announced that ENI and partner TOTAL had discovered a potentially sizeable gas field off its southwestern coast that's close to Egypt's Zohr deposit, which is the largest ever discovered in the Mediterranean.

The incident is the latest twist in decades-old feuds and overlapping claims in the eastern Mediterranean, brought into sharper focus by the discovery of some of the world's largest gas finds in the past decade lurking in the watery deep.

In addition to Greek Cypriot Administration, TRNC and Turkey, Israel and Lebanon are also at odds over offshore gas exploration and marine boundaries.

The Saipem 12000 had previously been commissioned to drill the Calypso, which lies less than 100 km away from the mammoth Zohr field off Egypt. It had been heading to a maritime block, known as Block 3, where it was to start work on another prospect, dubbed Cuttlefish.

Block 3, which lies far below Cyprus's Karpasia peninsula, the pointed 'panhandle' of the island, lies closer to Syria or Lebanon than Turkey.