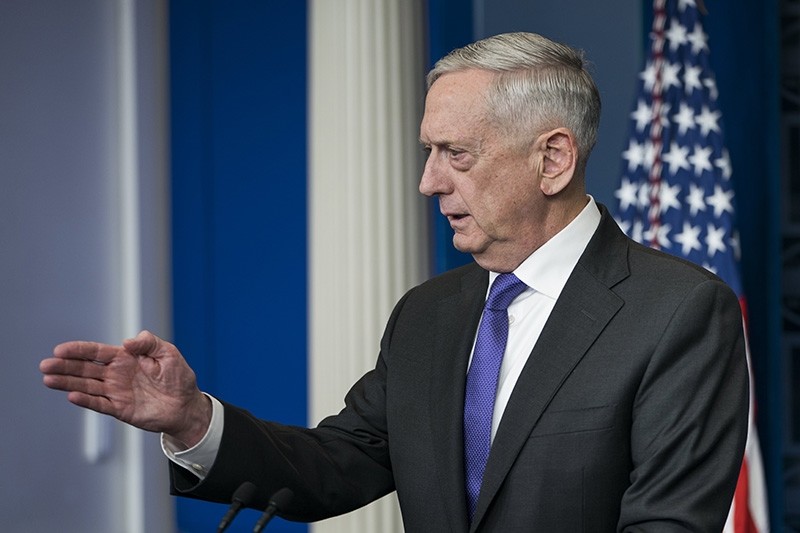 "The distraction of what's going on up in Afrin right now, which is drawing off some of the [SDF] forces, which have got about 50 percent," Mattis told reporters on his way to Brussels Sunday where he is scheduled to meet his Turkish Defense Minister Nurettin Canikli, adding that the percentage could be less or more.

Tensions have been running high since Turkey started Operation Olive Branch in Syria's northwestern Afrin district to remove the YPG from the region. Initially, U.S. criticism was muted, but that changed later due to an increasing flow of YPG-led SDF militants who traveled to Afrin to fight the Turkish military and Turkish threats over the Syrian town of Manbij where the is a U.S. special forces presence.

Mattis added that officials from the Turkish and U.S. military have started conducting daily meetings, and said the U.S. is assisting Turkey "in terms of missile defense and counterterrorism." He also and acknowledged areas of disagreement on how to take down Daesh as quickly as possible.

"But they have a legitimate security concern, and we do not dismiss one bit of that, along their border with Syria," he said. The U.S. partner force on the ground, the YPG, is the Syrian extension of the PKK, a group the U.S. designates as a terrorist group.

Some U.S.officials told American media that hundreds of forces had already left the fight against Daesh and refocused on the Turkish military, raising concerns about the sustainability of the forces.

To calm Turkish threats over Manbij, U.S. National Security Adviser Gen. H.R. McMaster visited Turkey on Sunday for the first time since Donald Trump was elected president. U.S. Secretary of State Rex Tillerson is also scheduled to visit Turkey later this week, and is expected to encounter Turkish officials amid tensions in ties, according to senior U.S. officials who briefed the media last Friday.

The joint statement released by the White House stressed the importance of shared interests and once again described bilateral relations as strategic. It also mentioned the exchange of opinions on how to effectively counter the terrorist groups in the region.