Turkey, Greece in row over Kardak islets in the Aegean 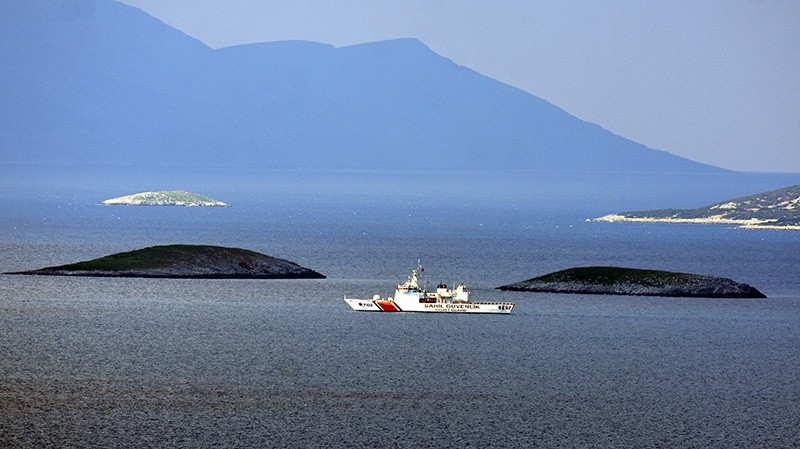 A Turkish coast guard vessel patrols the waters near Kardak islets, off the coast of the Bodrum district of southwestern Muu011fla province. (AA Photo)
by Daily Sabah Feb 13, 2018 12:00 am

The Greek Foreign Ministry summoned Turkey's ambassador to Athens on Tuesday over tensions near the Kardak islets in the Aegean, however, Turkey quickly rejected the diplomatic protest issued by Greece over the incident.

"In fact, our Undersecretary gave a phone call yesterday to the Secretary General of the Greek Foreign Ministry over the Greek Coast Guard's dangerous maneuvers near the Kardak islets that belong to our country and told the official that the Greek Armed Forces' hostile attitude is continuing both in the air and at sea, and that we will not tolerate these acts; escalating tensions in the Aegean will benefit neither Turkey nor Greece and the Greek side should immediately cease these dangerous moves," the ministry added.

The relations between the two countries have been strained over the last couple of days over ongoing issues in the Aegean and in Cyprus. On Saturday, Turkish warships blocked an Italian oil rig from reaching a natural gas exploration zone unilaterally declared by the Greek Cypriot Administration, which was followed by a foreign ministry statement accusing Greek Cyprus of jeopardizing regional security and stability. Turkey opposes the drilling before a permanent solution on the island, which it says disregards the rights of Turkish Cypriots.

Whereas on early Monday, a Turkish and a Greek coast guard vessel collided off the Kardak islets, rekindling tensions in a two-decade old issue stemming from the larger territorial waters dispute in the Aegean. Previously on Jan. 28, Greek Defense Minister Panos Kammenos was prevented from approaching the area on a Greek navy boat on the 22nd anniversary of a Greek military helicopter crash killing three soldiers during the military standoff between the two countries.

President Recep Tayyip Erdoğan warned Greece Tuesday of provocative actions in recent days. "No one should think opportunist attempts at gas exploration off Cyprus or Aegean islets go unnoticed. We warn those who overstep their limits not to make miscalculations by trying to take advantage of Turkey's focus on events to its south," Erdoğan said, referring to the ongoing Operation Olive Branch in the northwestern Syrian region of Afrin against the PKK-affiliated People Protection Units (YPG).

Yıldırım and Tsipras underlined that the issue should be solved through dialogue and agreed to organize a meeting between the two countries' military officials.

The two countries also have diplomatic problems over the rights of Turkish-Muslim and Greek-Orthodox communities, as well as Greek support or inaction for terrorist groups targeting Turkey.

The crisis was triggered when a Turkish vessel shipwrecked on the islets on Dec. 25, 1995. Greece claimed that the accident took place on its territorial waters, which Turkey denied, claiming that the islets belonged to Turkey.

Turkey's only female Prime Minister Tansu Çiller said at the time that Turkey was ready for a military operation and sent troops to the western islet to plant the Turkish flag.

Three Greek soldiers, Christodoulos Karathanasis, Panagiotis Vlahakos, and Ektoras Gialopsos, were killed during a reconnaissance mission when their helicopter which took off from Greek frigate Navarino crashed on Jan. 31, 1996, at the height of the crisis.

In contrast Greece, citing international law, wants to increase its territorial waters to 12 nautical miles, which would leave practically the whole Aegean Sea under Greek control. Through a parliamentary motion in 1995, Turkey declared unilateral action by arguing that, if Greece were to extend the boundary to 12 nautical miles it would be considered a casus belli.