Greece, Turkey should refrain from tensions in the Aegean, use dialogue: PM Yıldırım 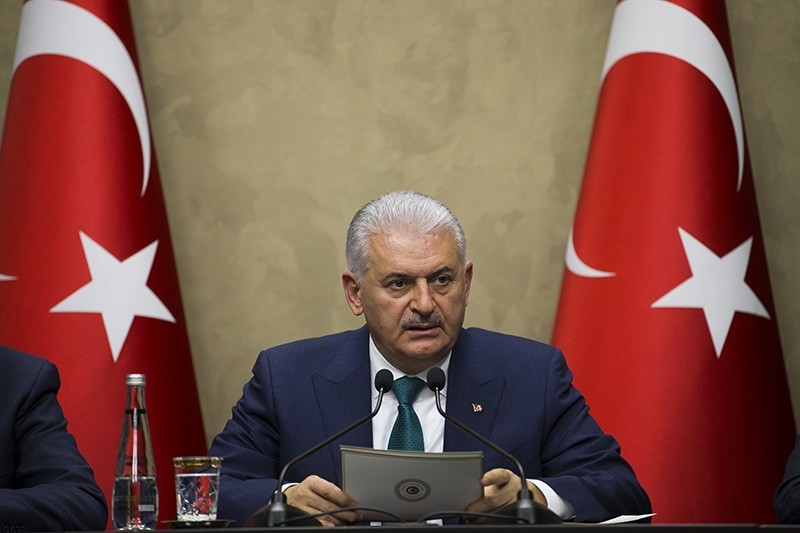 Ankara has "explicitly" told Greece that refraining from tensions would be "better" for bilateral ties, Prime Minister Binali Yıldırım said on Wednesday.

Talking to the media at Ankara's Esenboğa Airport before leaving for Belarus, Yıldırım said: "We explicitly expressed to him [Greek Prime Minister Alexis Tsipras] that staying away from tensions will be better, with regards to relations between the two countries."

His remarks came a day after he and Tsipras spoke over the phone and discussed recent developments in the Aegean Sea.

He said the Aegean Sea should be a "friendship" sea between Turkey and Greece.

Yıldırım said the Aegean Sea should be used "efficiently" for the welfare of both, Turkey and Greece.

"Recently, there have been some violations during this tension, which started with Kardak rocks, to which we gave a response," Yıldırım said.

According to Greek news agency AMNA, a Turkish patrol boat rammed into a Greek Coast Guard patrol boat near the Kardak islets in the southeastern Aegean on Monday night.

On Jan. 28, the Turkish Coast Guard blocked Greece's Defense Minister Panos Kammenos from approaching a pair of Turkish islets in the Aegean.

Coast guard officers warned Kammenos, who was heading to the Kardak islets in an assault boat to lay a wreath there. Following the warning, the Greek boat left Turkey's territorial waters.

A decades-long dispute between Turkey and Greece over the uninhabited Aegean islets brought the two countries to the brink of armed conflict in 1996 and led to renewed tensions this year.

"Therefore, it is not only Turkey that should be careful in avoiding such violations; at the same time, actors in the field from Greece should be more careful and act in accordance with the law and stay away from disputed areas," Yıldırım told reporters.

He added the two premiers had agreed to ease tensions and keep their communication line open via political and diplomatic channels.

Yıldırım said a NATO General Staffs meeting would be held in May.

"In this framework, the chiefs of General Staff of the two countries will gather and mutually discuss the necessary measures to ensure tensions in the field do not escalate further," he added.

About his two-day official visit to Minsk, Yıldırım said he would meet his Belarusian counterpart Andrey Kobyakov, as well as President Alexander Lukashenko.

Yıldırım said Turkey and Belarus would hold a business forum and sign agreements in several areas.

Following his visit to Minsk, the premier said he would head on Friday to Germany, where he is expected to meet Chancellor Angela Merkel and attend the Munich Security Conference.