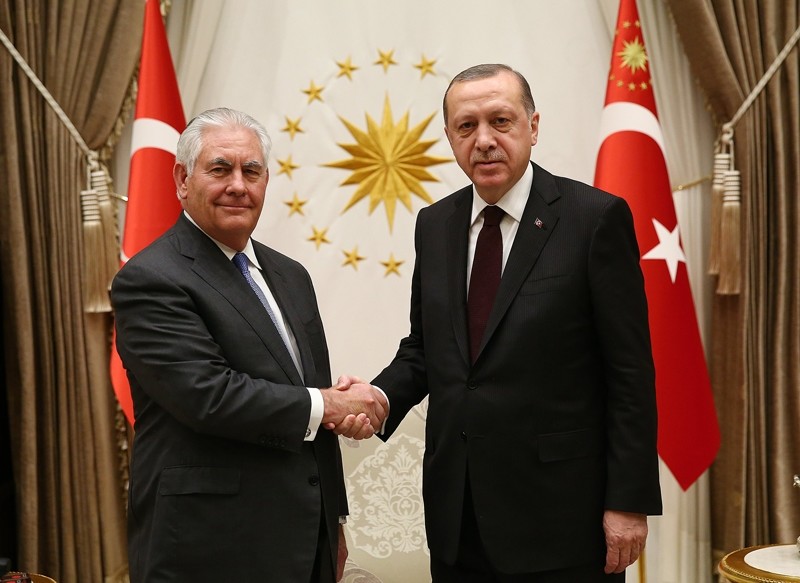 President Recep Tayyip Erdoğan met U.S. Secretary of State Rex Tillerson at the presidential complex in capital Ankara on Thursday as relations between Turkey and the United States reached a low not seen in decades over the U.S.'s support to the terrorist PKK-affiliated People's Protection Units (YPG) in northern Syria.

According to the presidential sources, Erdoğan "strongly and clearly" conveyed his concerns over the U.S. administration's support for the YPG terrorists as well as Turkey's priorities and expectations on Syria, Iraq, regional developments during the meeting with Tillerson.

Both presidential sources and the U.S. State Dept. spokesperson said the meeting was "positive" and "productive."

At a press conference in the Lebanese capital Beirut before heading for Ankara, Tillerson claimed his country had "never given heavy arms" to the YPG militia and therefore there was "nothing to take back," contradicting earlier Pentagon statements confirming the existence of heavy weapons in the YPG's hands given by the U.S.

Tillerson's visit became more challenging as a recent U.S. intelligence report again confirmed Ankara's concerns by citing the link between the PKK, which the U.S. designated as a terrorist group, and the YPG in northern Syria, putting Washington's support for the YPG in an unusual predicament.

Turkey was the last stop of Tillerson's five-nation trip followed by his stops in Egypt, Kuwait, and Jordan.

He is also expected to meet his Turkish counterpart Mevlüt Çavuşolu on Friday to discuss bilateral relations and international developments. The meeting is expected to be followed by a joint news conference.