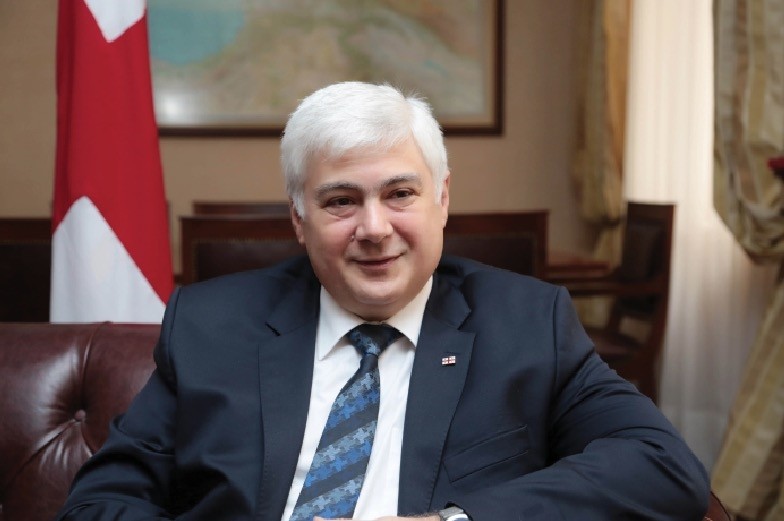 Georgia's Ambassador to Ankara Irakli Koplatadze praised Turkey's support for its policy of not recognizing Georgia's occupied territories and said that joint projects of global importance will further enhance ties between the countries.

"We have excellent relations with Turkey both in bilateral and multilateral formats [and] enjoy each other's support in international forums. Turkey unwaveringly supports Georgia's Euro-Atlantic and NATO aspirations as well as Georgia's sovereignty, territorial integrity and non-recognition policy of Georgia's occupied territories," Koplatadze told Daily Sabah in an exclusive interview.

Koplatadze said that Georgia counts on Turkey's strong support for its NATO integration process. Referring to criticism from Russia over NATO's activation in Georgia, Koplatadze said: "We want to assure our neighbors who are afraid of our Euro-Atlantic aspirations that our efforts to join NATO are not against anyone, but for the benefit of ourselves and future generations to ensure stability and security." Touching on political ties with Turkey, Koplatadze said that the high level visits and diplomatic traffic between the countries demonstrate the dynamic of relations.

The ambassador also pointed to the influence of the joint projects between Turkey and Georgia in the region. He said: "The projects of regional and global importance that will further enhance the wellbeing of our people include the Baku-Tbilisi-Ceyhan [BTC] oil pipeline, Baku-Tbilisi-Erzurum [BTE] natural gas pipeline, ongoing Trans-Anatolian Natural Gas Pipeline (TANAP) and Baku-Tbilisi-Kars (BTK) railway construction, crowning the quarter of a century strategic cooperation with this milestone new Silk Road project."

Koplatadze said that BTK railway is a new Silk Road having an equally huge economic importance and a geo-political dimension that will boost economic and political ties connecting the countries. Koplatadze said: "It will create new opportunities to take advantage of increased trade between China and Europe as well as China and Turkey."

The BTK railway will reduce the shipment times to 15 days and shorten the distance from Europe to Asia by 6,800 kilometers to 7,500 kilometers. "We are certain that the railway will effectively open a new rail corridor from the Caspian Sea to Europe via Turkey and will be an important driver of future increases in transport volume, particularly for containerized cargo."

Commenting on the implications of the TANAP project, he said it is a milestone for strengthening the region and the rest of Europe's energy security. He added: "In this context, Georgia welcomes the ongoing expansion of the South Caucasus Gas Pipeline, steady progress in the construction of TANAP and ground breaking of Trans-Adriatic Pipeline."

As Turkey is Georgia's number-one trade partner and one of the largest investors in Georgia, Koplatadze said the two countries have significant economic ties. "In the near future we expect active involvement of Turkish businesses in the largest ever infrastructural, hospitality and energy projects implemented in Georgia." He added: "The construction of hydro stations, wind energy farms and developing new winter ski resorts are in the country's investment portfolio."

Turkey and Georgia also enjoy a visa free regime enabling nationals of both countries to travel using only their IDs. He said the Batumi airport is the only airport of joint usage in the region functioning on the so-called Swiss model. "As a matter fact, the number of tourists and visitors have grown dramatically. About 1.5 million Turks visited Georgia and about 2 million Georgians visited Turkey in 2017. Those figures speak for themselves."