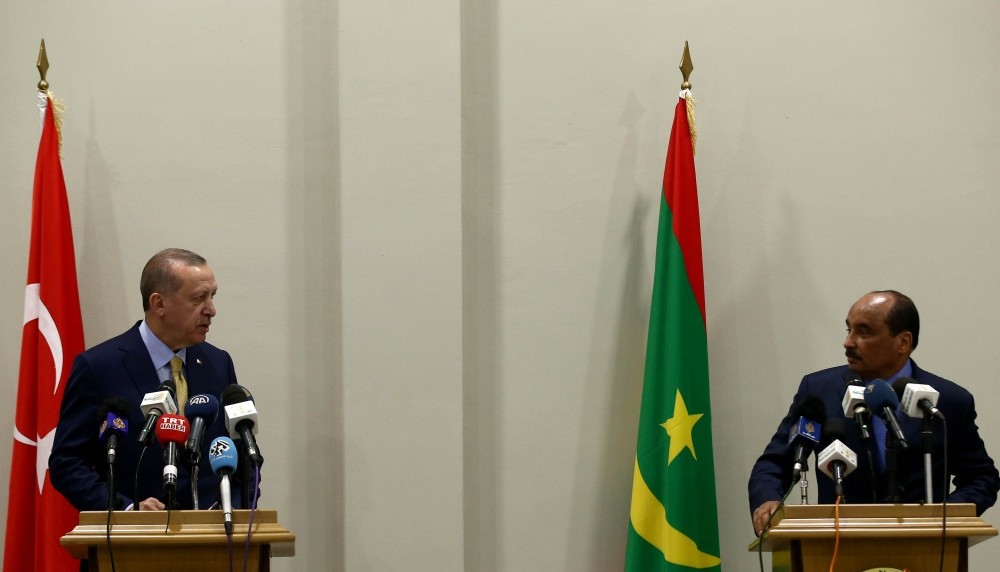 Jerusalem is the capital of Palestine, and there will be no compromises made on Turkey's stance on the issue, President Erdoğan said while in Mauritania

President Recep Tayyip Erdoğan said late Wednesday that there will be no compromise on where Turkey stands on Jerusalem, adding that recognition of the historic city as the capital of Palestine is not up for debate.

"It is absolutely nonbinding for us that the U.S. announced Jerusalem as an embassy [as the capital of Israel] by itself," Erdoğan said in Mauritania's capital Nouakchott during a joint press conference with the country's president, Mohamed Ould Abdel Aziz, as part of his official five-day visit to African continent, which includes visit to Algeria, Mauritania, Senegal, and Mali.

The U.S. government controversially decided on Dec. 6 to recognize Jerusalem, a city considered holy for Muslims, Christians and Jews, as Israel's capital, instead of Tel Aviv. The U.S. State Department announced on Feb. 24 that it would move its embassy from Tel Aviv to Jerusalem on May 14 — the day the state of Israel was established and officially recognized by Washington in 1948.

After the White House announcement on Dec. 6, Turkey called on the Organisation of Islamic Cooperation (OIC), as the Muslim world body's term president, for an emergency summit in Istanbul, where members protested the U.S.' Jerusalem decision, calling it null and void and also announced the recognition of east Jerusalem as the Palestinian capital.

After the OIC summit, the issue was voted on at the United Nations Security Council, resulting in a 14-1 vote, and later a draft resolution was proposed to the U.N. General Assembly, which passed with 128 for, 35 against and 9 abstentions.

Erdoğan highlighted the U.N. vote on Jerusalem by saying the world stood against the U.S.' unilateral decision.

"The powerful are never right, but the right are powerful. This is what we saw there [at the U.N.]. We will never compromise from where we stand on Jerusalem. Jerusalem is the capital of Palestine, and we have already announced that," the Turkish president said during the joint presser with Aziz."In an era when a new world order is being constructed, we would like to move forward with Africa," Erdoğan said, while also thanking his Mauritanian counterpart for solidarity during the failed July 15 coup attempt and against the Gülenist Terror Group (FETÖ).

Aziz said it was underlined during the meetings with the Turkish delegate that a just solution within the framework of international law is needed for the Palestinian issue. He added that it is Palestinian's right to establish a legitimate Palestinian state with Jerusalem as its capital.

Israel considers Jerusalem its "eternal, indivisible" capital, and Palestinians want east Jerusalem as the capital of a future Palestinian state. Israel captured east Jerusalem in the 1967 Six-Day War and annexed it in a move that is not internationally recognized.

In a recent visit to Vatican, Erdoğan also discussed the Jerusalem issue with Pope Francis. The holy city of Jerusalem's status should be maintained as per U.N. resolutions and international law, Erdoğan and Pope Francis agreed during their closed-door meeting at the Vatican in early February.