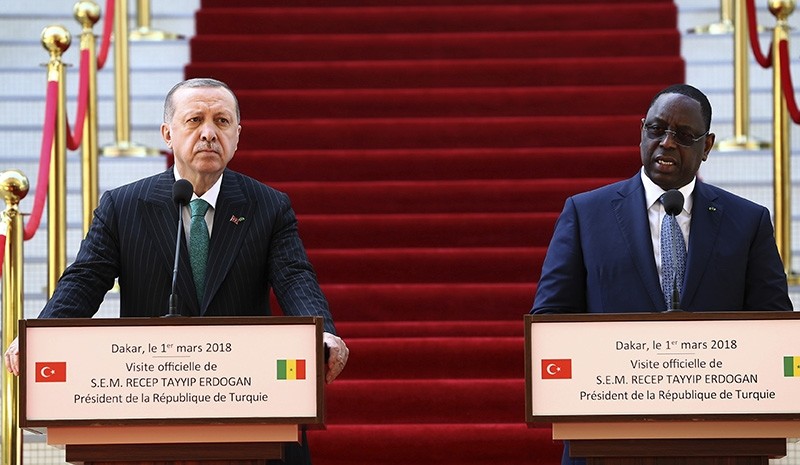 Erdoğan arrived in Senegal from Mauritania on Thursday, as his four-nation African tour continued.

"In two years President Erdoğan has suggested that the level of trade should reach $250 million," Senegal's President Macky Sall told a joint news conference with Erdoğan.

"I think today we are seeing a new impetus in our relations," Erdoğan responded.

Since coming to power in 2003, Erdoğan has worked to boost Turkey's links with Africa, an effort displayed through the number of new Turkish embassies which have sprung up across the continent and by the new routes which have opened up for Turkish Airlines.

"It's not about consuming or exploiting African resources," the Turkish leader assured during a visit to the new town of Diamniadio, 40 kilometers from the capital Dakar -- built largely by Turkish companies.

Late Thursday the president announced his country will donate $5 million (4.1 million euros) to a fledgling force of five African nations, battling terrorism and trafficking in the Sahel.

The G5 force -- including Burkina Faso, Chad, Mali, Mauritania and Niger -- aims to train and equip 5,000 troops to restore authority in lawless areas where terrorists have gained a foothold.

"Turkey is one of the countries which best understands the dangers with which you are confronted in the Sahel. We have therefore decided to give $5 million to help the G5 Sahel force," Erdoğan said in Nouakchott.

The European Union announced an extra 50 million euros ($61 million) for the G5 Sahel force at a fundraising conference in Brussels on Feb. 23.

With the Turkish pledge, a total of 418 million euros has now been promised by donors, which include Saudi Arabia, the United Arab Emirates and the United States.

The force is intended to become fully operational in mid-2018 and will serve alongside France's 4,000 troops in the area as well as the U.N.'s 12,000-strong MINUSMA peacekeeping operation in Mali.

However, until now only 50 million euros of the money pledged has been made available, and Sahel leaders have warned it is needed urgently to deal with an influx of Daesh terrorist group fighters driven out of Libya and Syria.

Erdoğan also used his visit to Senegal to call for reform of the United Nations Security Council.

"Five nations (permanent veto-wielding members Britain, China, France, Russia and the U.S.) can't be allowed to decide the destiny of the world," he said.

"Turkey, Senegal, Mauritanian should be members of the council."

Erdoğan, who started his African tour in Algeria, will end it with a short stop in Mali on Friday.

The president also highlighted that Turkey will continue its cooperation with Senegal in the fight against the Gülenist Terror Group (FETÖ).

"Our cooperation with Senegal in combating FETÖ will continue. Closing down FETÖ-linked schools is extremely important," Erdoğan said.

Turkey established the Maarif Foundation in 2016 to take over the administration of overseas schools linked to FETÖ. It also establishes schools and education centers abroad.

"Senegal is a valuable friend and strategic partner for us. Senegal has once again proven on July 15 that it is Turkey's foul-weather friend," he said.

Erdoğan said that 29 projects worth $775 million were launched by Turkish companies in Senegal, some of which are still underway.

The projects include a market hall, a furniture factory and a rail system, he said.

The Senegalese president said they were willing to continue efforts in further enhancing relations with Turkey.

"Senegal will continue to work with Turkey in international matters and counter-terrorism cooperation," Sall said.

He urged Turkey to invest in the country.

"I am calling on Turkish businesspeople to share their experiences and increase their cooperation," Sall said.

"So far, 28 different agreements have been signed between the two countries. We need more cooperation with Turkey for self-sufficiency in Senegal's agricultural area."

"Turks can invest in the field of mining, construction, tourism, health and energy in cooperation with Senegalese businesspeople," he said.

Sall added that the country needs more hotels in Senegal to improve the tourism potential of the country and health investments to reduce the number of patients going to hospitals abroad.

The Senegalese president said they stand on the same side as Turkey on the Palestinian issue.

The leaders vowed to enhance cooperation in the fields of economy, trade, energy, tourism and transportation.