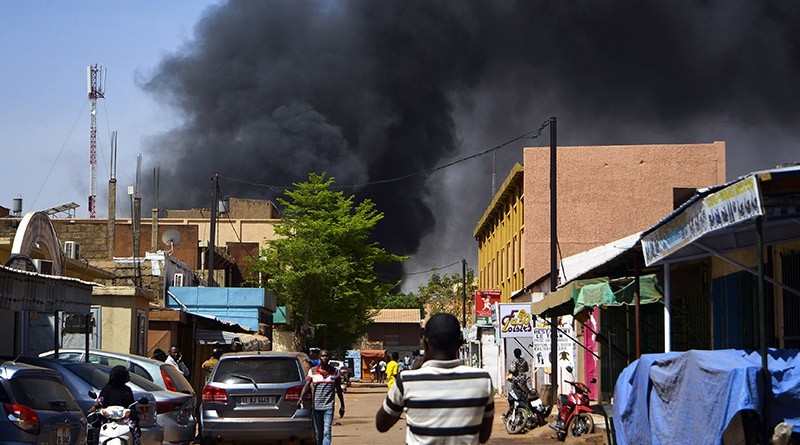 Smoke rises in the streets amidst a terrorist attack in the capital Ouagadougou, Burkina Faso. (EPA Photo)
by Anadolu Agency Mar 03, 2018 12:00 am

Turkey's Foreign Ministry on Saturday condemned Friday's terror attack in Burkina Faso's capital of Ouagadougou in which more than 20 people were killed.

"We condemn this heinous attack and offer our condolences to the people and Government of Burkina Faso," the ministry said in a statement.

"Gunshots and explosions have been heard near the Prime Ministry in Ouagadougou," the Burkina Faso police said in a Facebook post on Friday.

"The attack concerns the following areas according to the first information available: around the Prime Ministry, the roundabout near United Nations," it said.

Three security sources, two in France and one in West Africa, said on Friday that at least 28 people had been killed.

Two of the sources said 28 people were killed and a third spoke of "around 30" dead in the attack in the capital Ouagadougou. In a simultaneous attack, the French embassy was also targeted, leaving six assailants killed, according to the Burkinabe government.

Last year, at least 20 people were killed and several others injured in an attack on a restaurant in Burkina Faso's capital.