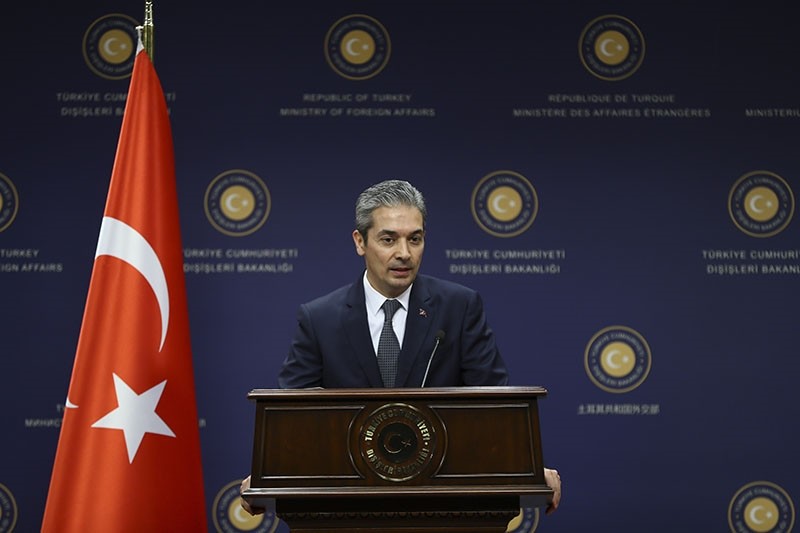 Turkey expects U.S. to take back weapons handed to PKK-affiliated People's Protection Forces (YPG) in Syria and will discuss the issue in the meeting scheduled for March 8 and 9 on the situation in Syria and the northern town of Manbij, Turkish Foreign Ministry Spokesperson Hami Aksoy said Tuesday.

Despite U.S. assurances and Turkey's repeated warnings, the U.S.-backed Syrian Democratic Forces dominated by the YPG continues to control Manbij and its surrounding area. Ankara considers YPG's presence on its borders as a grave threat to its national security, especially in Manbij, a predominantly-Arab area located west of the Euphrates River.

In the district of Afrin, Turkey launched Operation Olive Branch on Jan. 20 to clear PKK/KCK/PYD/YPG and remaining Daesh elements from the area, end terrorists' cross-border attacks and intrusions on Turkish soil, and allow for the return of displaced civilians.

Manning previously said that the Pentagon will continue to support "General Mazlum" and other military councils in areas captured from Daesh terrorists as long as they will fight against Daesh.

Şahin is on Turkey's most wanted list and being sought by Turkish authorities with a 4 million Turkish lira ($1.5 million) bounty on his head.

Aksoy reasserted that the PYD/YPG is an affiliate of the terrorist PKK group, adding that Manning must also know this.

The U.S. has claimed the PYD/YPG/PKK is a "reliable ally" in the fight against Daesh, against strong Turkish objections that it is a Syrian affiliate of the terrorist PKK, whose 33-year war against Turkey has resulted in tens of thousands of deaths, including those of women and children.

Turkey will set up camp for 170,000 people in nine locations near Syria's Idlib, an area controlled by the Turkish Armed Forces (TSK) and the Free Syrian Army (FSA) in northern Syria after Operation Euphrates Shield launched against Daesh terrorists, Aksoy said. The TSK and the FSA have gained control northern Syrian towns of Jarablous, al-Rai, Dabiq and al-Bab during the operation, thereby providing security to the Syrian border town of Azaz, which has become a massive center of refugees during the civil war due to its proximity to Turkey and location on the road connecting the main border gate with Aleppo, Syria's largest city before the war.

The Turkish Red Crescent and Disaster and Emergency Management Agency (AFAD) have begun preparing to set up a 170,000-person capacity camp in Idlib and the Operation Euphrates Shield-liberated region, including Azaz, Albil, Tugli, Tal Afar, Naddah, Bardakli and Mashad Rufi, he added.

He said emergency preparations include the establishment of new camps in case of a large civilian exodus from Afrin.

He added that Foreign Minister Mevlüt Çavuşoğlu will visit Russia from March 12 to 14, and Washington D.C. on March 19.