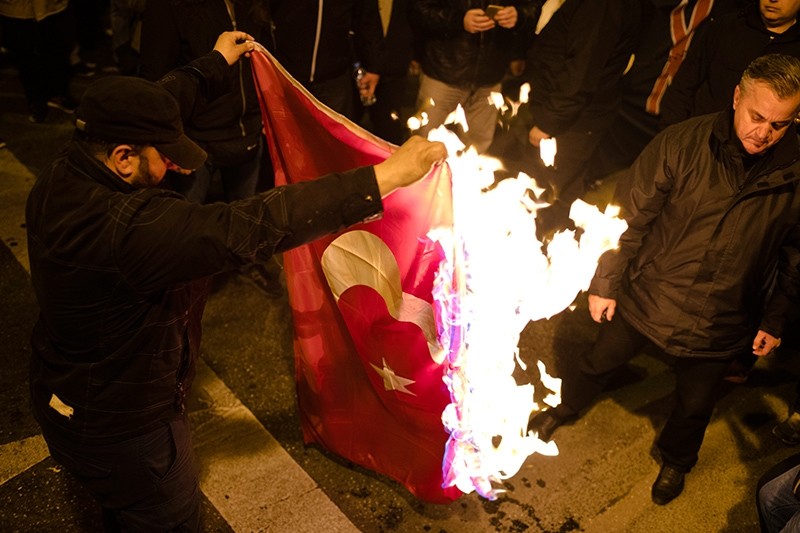 The Foreign Ministry on Wednesday voiced Turkey's discontent over burning of a Turkish flag in Greece.

"We strongly condemn the burning of our flag during a rally against Turkey organized by a racist political party in Athens on 5 March," the ministry said in a statement.

"We demand that the Greek authorities arrest the perpetrators who committed this heinous act against our flag, and bring them to justice as soon as possible."

Meanwhile, the ministry spokesman Hami Aksoy also criticized Greek President Prokopis Pavlopoulos, who reportedly said Greece "might not have the territory that [it] should have had historically," adding that "if history compels us, we will do what our ancestors had done."

"We invite President Pavlopoulos to respect international law and our borders, and to refrain from a rhetoric which is not befitting his position, and that could cause unnecessary tension," Aksoy said.

Addressing reporters in Ankara on Wednesday, Presidential Spokesperson Ibrahim Kalın stated that burning a nation's flag is a hate crime, and Turkey hopes that perpetrators will be found and punished accordingly.

Tensions in Turkish-Greek relations spiked recently over disputed Kardak islets in the Aegean and two Greek soldiers arrested on espionage and trespassing charges in the northwestern province of Edirne.