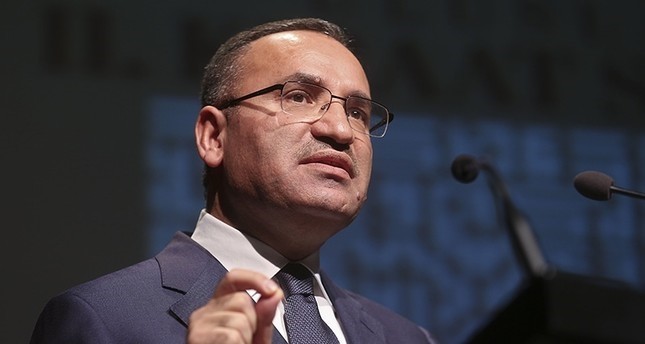 Turkey is greatly concerned about the latest PKK attacks in Germany, and expects the German government to do its utmost to ensure the safety of the Turkish community, government spokesperson Bekir Bozdağ said late Monday.

"We are calling on the German government to be more sensitive about the safety of its Turkish citizens and other Muslims living in the country, and bring terrorists to justice," he said.

A Turkish mosque in German capital Berlin was set on fire early Sunday in the latest incident of a series of attacks targeting the country's Turkish and Muslim community by PKK sympathizers and far-right groups.

The suspected attack was the final incident in hundreds of attacks that targeted the country's Turkish and Muslim communities amid a rising far-right trend after a massive refugee influx. There were 950 attacks in Germany last year on Muslims or places linked to Islam, according to the interior ministry.

On Saturday, a webpage affiliated with the PKK and its Syrian offshoot the Democratic Union Party (PYD) has posted a video footage of an attack early Friday on a mosque in southwestern Germany.

Attacks by PKK sympathizers gained pace after the launch of Turkey's Operation Olive Branch to root out PKK-affiliated People's Protection Forces (YPG) terrorists in Afrin on Jan. 20. Numerous mosques and Turkish community centers in several German cities and even the Turkish embassy in Berlin have been attacked by YPG/PKK supporters.

The PKK has been banned in Germany since 1993, but it remains active, with nearly 14,000 followers among the country's Kurdish immigrant population. Turkey has long criticized Germany for not taking serious measures against the PKK, which uses the country as a platform for their fund-raising, recruitment, and propaganda activities.

Germany has a three million-strong Turkish community, many of whom are second- and third-generation German-born citizens of Turkish descent whose grandparents moved to the country during the 1960s.

The drone footage shows the terrorists using force to block Afrin's Syrian residents from leaving the district, even to the point of using gunfire.

The civilians, seeking to flee to avoid being used as human shields, are shown being stopped from leaving the city center by YPG/PKK terrorists at checkpoints.

Underlining that Turkey's fight against terror groups is not limited to the operation in Afrin, Bozdağ said Turkey and Iraq plan a joint operation against the PKK starting this May to eliminate the terror group in Iraq.

"Negotiations with Iraq's government were positive. The Iraqi government reached a consensus with Turkey against the terror group," he said.

A total of 3,381 terrorists have been "neutralized" since the launch of Operation Olive Branch in Afrin, Syria, Bozdağ also said.

Ankara launched Operation Olive Branch on Jan. 20 to clear terrorist groups from Afrin in northwestern Syria amid growing threats posed from the region to Turkey.

On the first meetings last week of three Turkish-U.S. technical committees to mend ties, the spokesman said: "Turkey once more openly conveyed its expectations from the U.S. during the meeting in Washington."

He also confirmed Foreign Minister Mevlüt Çavuşoğlu's March 19 visit to Washington to discuss the results of the meetings to date.

On the trilateral summit of leaders from Turkey, Russia, and Iran set for Istanbul, Bozdağ confirmed the date as April 4 and added that a strategic partnership meeting between Turkey and Russia is to be held on April 3.