Uncertainty in Turkey-US ties to continue with Pompeo's arrival 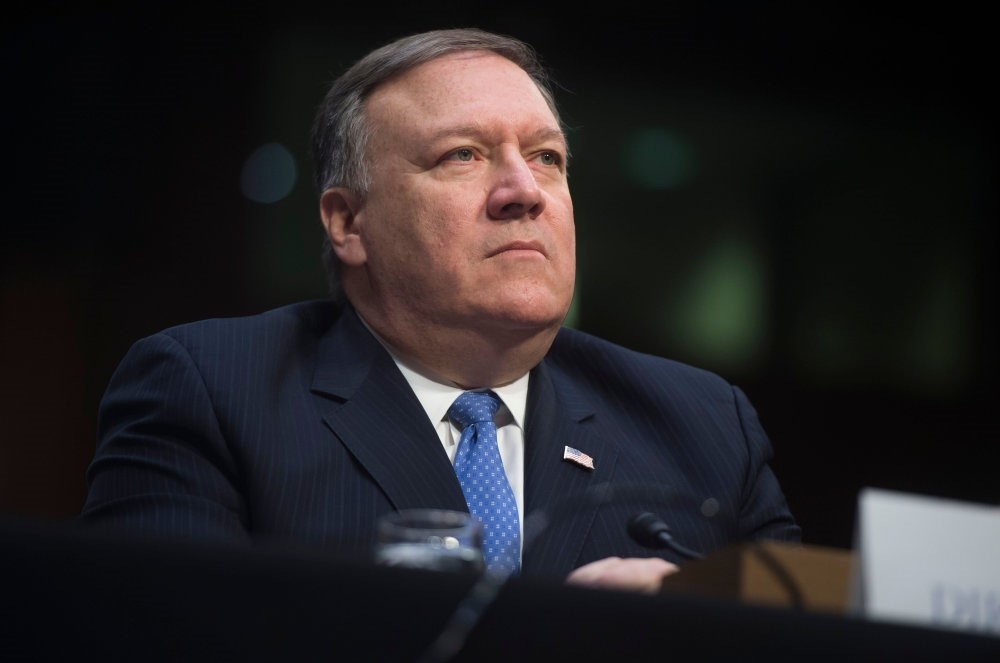 Former CIA Director Mike Pompeo, who is expected to replace Rex Tillerson and become the new secretary of state, testifies on worldwide threats during a Senate Intelligence Committee hearing on Capitol Hill in Washington, Feb. 13.
by Şeyma Nazlı Gürbüz Mar 16, 2018 12:00 am

U.S. foreign policy takes a new route with Tillerson's ouster and replacemend by CIA director Pompeo, But, according to experts, when it comes to relations with Turkey, the U.S. is likely to maintain the status quo, particularly, concerning of YPG and FETÖ

Tuesday marked the end for the U.S. secretary of state when it was announced that Rex Tillerson, who has been the head of the State Department for a year, will be replaced by the director of the CIA, Mike Pompeo. Pompeo is known for having a close relationship with President Donald Trump, in contrast to Tillerson, who during his short but intense tenure had many divergences with him on various issues. According to experts, however, this difference in personal relationships is not likely to make a difference in U.S. foreign policy, which has been strained and has experienced a loss of trust over several issues, including relations with Ankara.

According to Ali Çınar, the president of U.S.-based Turkish Heritage Organization, it would be wrong to expect a big difference from Pompeo in a short period of time.

"Pompeo was seeing Mr. Trump almost every day. He would probably perform well in his duty since he is close to the Department of Defense and Trump," Çınar said.

The initial response from Turkey to the replacement of Tillerson, which came from the Prime Minister Binali Yıldırım, was also quite positive, addressing worries as to whether Tillerson's departure would affect relations between the two countries. Yıldırım said relations do not depend on individuals or their personal views on Turkey. "Whoever comes in, Turkey's stance is clear. It is not so important to us what the new secretary thinks about Turkey," Yıldırım said. The U.S. ambassador to Ankara from 2008 to 2010, James Jeffrey, said: "Turkish officials have said personalities are not important," adding that there still may be differences in details and timing on major issues, particularly Syria, within the U.S. government, but there is a high level of agreement to continue along the lines laid out by Tillerson and others. The White House and State Department have had a number of high-profile clashes after Tillerson took the post as the U.S.'s top diplomat, including a glaring split during a dispute between Qatar and its Gulf Arab neighbors.

Trump and Tillerson have also clashed over a number of key foreign policy issues, including climate change and the nuclear deal with Iran, which Trump cited shortly after making his announcement on Twitter.

"We disagreed on things," Trump told reporters before heading to California. "When you look at the Iran deal, I think it's terrible, I guess he thought it was O.K. I wanted to either break it or do something, and he felt a little bit differently." In addition, the budget of the secretary of state was cut up to 40 percent under Tillerson's charge and many career diplomats left their jobs due to the bureaucratic problems stemming from Tillerson such as not appointing many U.S. envoys, including an ambassador to Ankara.

Foreign Minister Mevlüt Çavuşoğlu, whose March 19 trip to Washington and the planned meeting on Manbij have been postponed due to this development, had said that he and Tillerson had constructive talks despite the relations between the two countries being strained, and said he hopes to maintain a similar dialogue with Pompeo.

Çavuşoğlu was expected to hold a meeting with Tillerson regarding the situation in Manbij in northern Syria, which is currently held by the PKK Syrian affiliate People's Protection Units (YPG) –one of the crucial topics that has created problems between the two countries. However, Trump's unexpected move has changed those plans. "The U.S. is committed to resolving both the immediate problem of Manbij with some sort of security zone worked by the Turkish and U.S. sides," Jeffrey said. He also said that Turkey and the U.S. should find common ground on finding an alternative to the current Syrian regime led by Bashar Assad and growing Iranian influence in the region.

Jeffrey argued that for these two issues to be addressed, the U.S. must be present militarily in the region and in sync with Turkey.

Relations with Turkey had its many ups and downs while Tillerson was secretary of state. Especially regarding the YPG presence in northern Syria and the U.S. support to the group, the two countries came to odds more than once and had quite strained relations, including a visa crisis that led to the removal of visa services by both countries for a short time. Still, dialogue with Tillerson was usually open, as sdhownby his visit to Turkey in February.

President Recep Tayyip Erdoğan met Tillerson on Feb. 15. The meeting came at a time when relations between Turkey and the United States reached a low not seen in decades over the U.S.'s support for the YPG.

Tillerson had a meeting with Çavuşoğlu the next day. He said the U.S. would work on the promises it gave to Turkey concerning Manbij. Tillerson also said the U.S. and Turkey will no longer act alone in Syria. "We will work together," he said. He added that the U.S. recognizes Turkey's right to secure its borders, but reiterated Washington's call for Ankara to show restraint in its Operation Olive Branch in Afrin that is launched against the YPG in northern Syria. After Tillerson's visit, Ankara and Washington agreed to establish joint working groups to overcome their differences, particularly the U.S. support for the YPG, the Gülenist Terror Group (FETÖ) and Iraq. A decision on Manbij was discussed on March 8-9 at a working group. Ankara has also requested that the U.S. take back the arms it has given to the YPG, arguing that they will eventually be used against Turkey, which says the YPG will transfer them to PKK militants. Turkish officials say that the PKK, a group listed as a terrorist organization by the U.S. and EU, is organizationally linked to the YPG. The U.S. has given the Syrian Democratic Forces (SDF), which is dominated by YPG elements, nearly 5,000 truckloads of weaponry and military equipment on the pretext of fighting the Daesh terrorist group.

When it comes to Pompeo, however, the future of relations is full of uncertainties. Pompeo has been the director of the CIA since Trump started his term. He is from California and went to Harvard Law School. He was elected to the House of Representatives for three terms as a as a socially conservative "Tea Party" Republican from Kansas. He is known for his harsh stance on Iran and closeness to Saudi Arabia and the United Arab Emirates. He was a major critic of President Barack Obama's foreign policy and has criticized Muslims in many speeches. He also criticized the actions of Russia in Syria and thinks the Assad should step down. He is also expected to have good relations with Secretary of Defense James Mattis since he has a military background.

He was a member of Turkish Friendship Group during his six years in Congress. He did not support the Armenian genocide draft bill and did not have an attitude against Turkey regarding the Cyprus. He also made his first official visit to Turkey as director of the CIA. However, on his Twitter account he also compared Turkey to Iran following the 2016 coup attempt, saying "both are totalitarian Islamic dictatorships."

Çınar said that Pompeo knows Turkey closely and his visit shows the country's importance for him. "They're a NATO partner and we need them to behave as such," Pompeo said about Ankara. "There've been pockets where they've helped us but there have been places where they've not always been the most productive ally," he said during a Center for Strategic and International Studies (CSIS) open meeting. "Pompeo's statements on the YPG are staid, yet we can say that he sees the organization as an ally. It seems that he will try to follow a policy that will be on balance without hurting any side. Yet, we expect him to act in accordance with Turkey's wishes on the Manbij negotiations since U.S. military representatives have already started to send positive messages on it," Çınar said.

Speaking on the issue yesterday, Presidential Spokesman İbrahim Kalın said that what has been discussed so far on Manbij is binding for the U.S. and there will not be any changes with Pom

peo. "We have determined two roadmaps as a result of our negotiations with the U.S. on Manbij, now we are waiting for it to be applied. If the U.S. fulfills its promises, a security zone would be established around Manbij. Pompeo is now familiar with the files, which would make us lose a few weeks, but we still will continue to work on the issue," Kalın said.

Another major problem in U.S.-Turkish relations is the Fetullah Gülen's presence in the U.S. and the U.S.'s alleged support for his group. Since the failed 2016 coup attempt, strong anti-American sentiments have persisted in Turkey, with recent surveys showing that social media is awash with comments denouncing the perceived role of the U.S. in the coup attempt. Even though myriad conspiracy theories linking the U.S. to past coups in Turkey are nothing new, it is Gülen, the leader of FETÖ, whose stay in the U.S. fuels rumors. Gülen has lived in the country since 1999, and currently lives in a retreat in Pennsylvania where he sometimes gives interviews to the media. Despite Ankara's extradition requests with hundreds of boxes of evidence that it says proves Gülen's crimes, the U.S. has so far not responded positively.

According to Çınar, unfortunately, the same indifferent policy on FETÖ is likely to continue under the Pompeo as well.