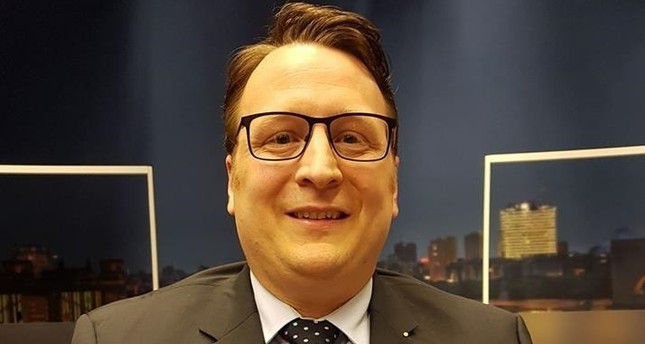 In an interview with the Daily Sabah, Dr. Christian Johannes Henrich commented on current events and the German-Turkish relationship.

The current Afrin operation was "a logical step" from Turkey's point of view as the PKK has long used areas along the Syrian border as a 'retreat' for its YPG comrades, Henrich told the Daily Sabah.

"This kind of autonomous self-government next to Turkey cannot be accepted. This should have been clear to everyone after Operation Euphrates Shield at the latest."

Germany does not play a particularly "honorable role" here, the German academic said, pointing out that although the PKK is classified as a terrorist organization by Germany, the government then equips its sister organization in Syria, the YPG, to fight against Daesh. Also, against PKK propaganda in Germany, the government is doing "nothing or clearly too little," Henrich said.

He also said he himself had to conduct a conference under police protection at the University of Hanover because a PKK-affiliated group threatened the university.

"Germany also sells weapons and equipment to the Turkish army. Our arms industry benefits both sides. [This situation is] morally and ethically extremely questionable," Henrich added.

So far, there has been "little to no interest in his work" from Turkey, even though there are not many Western scientists who, for example, do not consider the genocide allegations as biased as the mainstream does, Henrich said.

"You always stand alone when you stand against the mainstream. Even in science, this is not uncommon. After all, the mainstream is determined by journalists and politicians and is not the result of a scientific study. Let's take the Armenian issue, [for example]. In the Bundestag [Lower House of Parliament], no scientific research on the topic took place before the resolution. Many publications show only one side of the coin. It is being researched purposefully, but hardly anyone goes to the archives," Henrich explained.

Every German knows that there was a genocide of Armenians, "of Armenian terrorist groups who murdered Turks and Armenians, but nobody knows anything," he noted.

"People have been unilaterally informed here for decades. This kind of research has nothing to do with gaining scientific knowledge. They want to discredit Turkey. (...) the possible genocides in Algeria by France, in Congo by Belgium, in Indonesia by the Netherlands, in Morocco by Spain and in Namibia by Germany were not, and will not be an issue in the European Union or the German Bundestag."

As for recent discussions on the Turkish judiciary, Henrich said it is almost as if the police and the military are "never completely independent of the government" in Turkey, but underlined that this is not a phenomenon particular to Erdoğan, as always wrongly told in Europe. "The Kemalists had already used justice and security authorities against [their] political opponents," he said.

In the case of Deniz Yücel, Germany has "taken note of the release as an act of goodwill," and in return, they will "probably modernize the Turkish Leopard tanks."

According to Henrich's description, the Turkish society is characterized by "openness and hospitality." "In Turkey, a Turk who has different ethnic roots than his/her fellow citizens is accepted [by society] if he feels attached to Turkey. In Germany, the question always arises, [the question of] where you actually come from. We often make citizenship dependent on origin, whereas in Turkey it depends on loyalty to the fatherland."

Dr.Henrich is a habilitated philosopher and political scientist as well as the co-founder of the Research Center for Southeastern Europe and the Caucasus (SOEK), which was founded in 2006 at the Chair of International Politics at the University of Siegen in Germany and now acts independently. The research center works as a non-university and independent scientific research institution. Its research focuses on the Balkans, Thrace, Anatolia and the Caucasus.

Dr. Henrich was previously also a member of the school board and integration council of the CDU in the German city of Siegen, until his resignation in 2015. The reason for the end of his 21-year party membership was the attitude of the Christian Democrats on the Armenian issue. In addition, Dr. Henrich spent many years in Turkey and is well versed in the cultural, political and historical dimensions of the country.