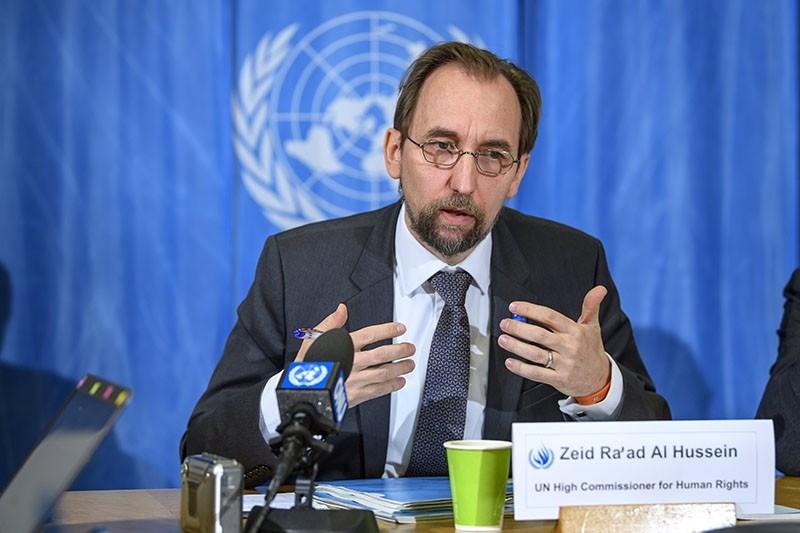 Zeid Ra'ad Al Hussein, UN High Commissioner for Human Rights, answers questions from journalists about the follow-up to the annual report at the Human Rights Council, at the European HQ of the UN in Geneva, Switzerland, March 09, 2018. (EPA Photo)
by Daily Sabah Mar 20, 2018 12:00 am

The foreign ministry on Tuesday criticized a U.N. human rights report for ignoring the terrorist threats faced by Turkey and matching the propaganda of terrorists and noted that Turkey will submit a formal notification to the OHCHR regarding the matter.

In a statement, the ministry said that the aforementioned text "has no meaning" as it does not take into consideration the situation in Turkey following the July 15, 2016 failed coup attempt, which "targeted the survival of the country and the democratic life of the nation."

The report urged Turkey to "promptly end the state of emergency and restore the normal functioning of institutions and the rule of law," while criticizing the detention of around 160,000 people following the deadly coup attempt, which killed 251 people.

"The sheer number, frequency and lack of connection of several decrees to any national threat seem to … point to the use of emergency powers to stifle any form of criticism or dissent vis-à-vis the government," it said.

The statement criticized the High Commissioner for lacking objectivity and having prejudice against Turkey.

"The last text that he published contains unfounded allegations matching up perfectly with the propaganda efforts of terrorist organizations. This is an unacceptable situation," the statement said.

The ministry noted that U.N. High Commissioner for Human Rights Zeid Ra'ad al-Hussein has declined Turkey's invitations to visit the country, and "refrained from submitting any request to visit Turkey for preparing this last text and he has prepared it in cooperation with terror-affiliated circles." The ministry, therefore, noted that al-Hussein's claim of having no access to Turkey is "baseless."

Criticizing the report for containing distorted, biased and fake information about Turkey, the ministry said that they will submit a formal notification to the OHCHR, while highlighting that Turkey will maintain its determination to "protect human rights, to promote current standards to the most advanced levels and to cooperate with international organizations including the U.N. in these matters."