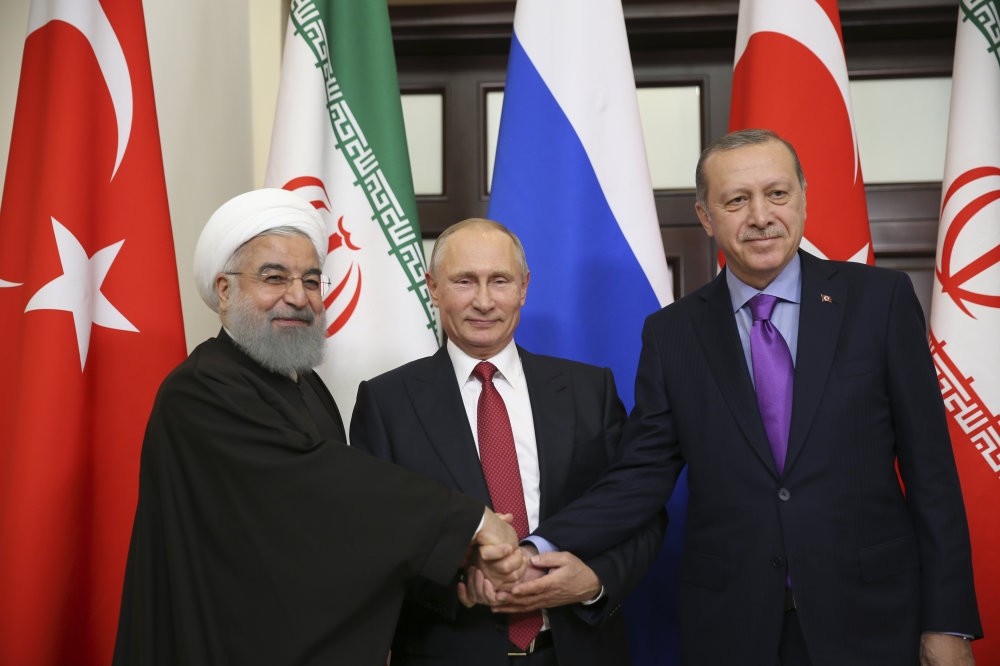 Turkey, Russia and Iran have been holding a series of trilateral summits since they initiated the Astana talks, the first of which was held in the Russian Black Sea city of Sochi on Nov. 22, 2017.
by Özgenur Sevinç Apr 04, 2018 12:00 am

The top issues for the summit that will be held in Ankara are expected to be the political transition period in Syria, the recent developments in Afrin following Turkey's operation and the latest situation in the de-escalation zones in Idlib

With no end in sight in the Syrian civil war, the presidents of Turkey, Russia and Iran are meeting in the Turkish capital to discuss a peaceful, political resolution to the crisis.

Key issues, including a political transition in Syria, developments in Afrin after Turkey's Operation Olive Branch, and the latest situation in the Syrian de-escalation zones, will top the meeting's agenda.

Commenting on the summit, Ahmet Uysal, the head of the Center for Middle Eastern Strategic Studies (ORSAM), said the three countries have shown strong will to handle the Syrian crisis and added that "the trilateral summit in Ankara is significant as the presidents of Turkey, Russia, and Iran will discuss the future steps that may contribute to the efforts for a political resolution in Syria."The first of the trilateral summits was held in Russia's Black Sea city Sochi on Nov. 22, 2017. Turkey, Russia and Iran have since come together in a series of meetings as they launched a Syrian peace process in Astana.

In relation to the efforts by the three countries, Eşref Yalınkılıçlı, a Eurasia analyst, said: "Even though the summit may not provide end results to the conflict, at least some progress would be made as the three parties seem to better understand each other."

Turkey and Russia, together with Iran, are the guarantor countries that brokered a cease-fire in Syria in December 2016, leading to the Astana talks, which ran parallel to the U.N.-backed discussions in Geneva to find a political solution to the civil war.

Yalınkılıçlı said that the three countries have preserved their previous positions. "While Turkey has been stressing that Assad cannot remain in the power, Russia has been supporting the regime and Iran would like the regime to continue ruling Syria as if nothing happened," he said.

However, Turkey, Russia and Iran are on the same page regarding Syria's territorial integrity. Even though Russia and Iran back the regime, Turkey has been repeatedly stressing that the Assad regime, which is responsible for the death of thousands its own citizens, cannot have a say in the future of Syria.

In order to reach a political solution in the medium term, Yalınkılıçlı said: "Russia and Iran may persuade Turkey to accept the Assad regime to remain in power during the transition period until the constitution securing the territorial integrity of Syria and upholding the democratic rights of people is written and the elections are held."

Meanwhile, Turkey's recent achievements in Afrin may strengthen Turkey's arguments in its talks with Russia and Iran.

Hakkı Uygur, the vice-director of the Center for Iranian Studies, said that Turkey is likely to hold the upper hand in talks as Iran faces significant problems, like a possible cancellation of its nuclear deal by the U.S.

Uygur said that, "some progress can be made in line with Turkey's views."

Aside from the success of Operation Olive Branch, experts believe that Turkey's friendly ties with Russia might enable further progress and cooperation in critical issues like eliminating PKK-linked People's Protection Units (YPG) along the Turkey-Syria border.

Yalınkılıçlı underscored that Turkey's relations with Russia have been improving with recent developments, like the Akkuyu Nuclear Power Plant to be built by Russia's Rosatom. Construction work at the project was inaugurated by Erdogan and Putin yesterday.

Referring to Russia's deteriorating ties with western countries, Yalınkılıçlı pointed out that Turkey has not taken the united stance against Russia over the alleged poisoning of a former Russian agent on U.K. soil.

"The friendly ties between Russia and Turkey and the successful operation in Afrin, would strengthen Turkey's hand in the negotiations and would clear the way for Turkey's possible operation to Tal Rifat, which is strategically significant," Yalınkılıçlı said, adding that clearing off Tal Rifat would enable Turkey to move its anti-terror operation toward Manbij.

Turkey has been signaling that it would continue operations against the YPG after Operation Olive Branch in Afrin was launched on Jan. 20.Officials in Ankara stressed that Turkey would not allow the YPG to consolidate its grip along the Syrian border.

Tal Rifat, currently under YPG control, is considered to be the next step for Turkey's operation against terrorist groups in the region.